Q. What can I do to make my mixes sound more like commercial records? Skip to main content

Q. What can I do to make my mixes sound more like commercial records?

I'm producing my own music, but I want it to sound as professional as possible. I'm sure that there must be certain tools that home studio owners can use to help them match their mixes and recordings with commercial ones. Do you have any advice for me on the best way to go? 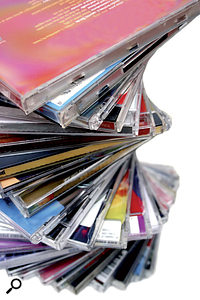 A reference CD compilation of commercial tracks whose production qualities you admire can be a useful tool for helping to ensure high standards in your own mixes.

SOS contributor Tom Flint replies: One of the best things you can do is create your own reference compilation so that you have something with which to compare your own work and production decisions. All of us, of course, can think of songs or pieces of music that we love because they sound a certain way. Making a reference compilation is really just a matter of collecting some of those tracks together and putting them onto a format that can be played on a variety of music systems. At this point, I still think the CD-R is the best media choice.

In general, the bigger the variety of tracks, the better, although if you were concentrating on producing a very particular genre of music it might be worth creating another dedicated compilation comprising tracks just from within that genre. There may also be music that is not particularly your cup of tea but still has admirable production qualities, and this is worth including too, as long as you can bear to listen to it! The most important thing is to select tracks that have something about them that seems to work particularly well, and make sure that each one reveals something its compilation that others on the collection do not. There would be no point, for example, in including endless variations of a particularly pleasing type of bass sound; one or two examples should suffice.

The first thing a well-considered compilation will reveal is that there really is no such thing as the perfect sound. Some productions seem to pack every frequency with noise, while others are relatively sparse. There are countless other contrasts too and I am continually amazed at how much productions can vary, and yet still sound professional, polished and satisfying.

Ideally, tracks should be taken from CDs, tapes and vinyl rather than MP3s, for quality reasons, but be sure to respect the music owners' copyrights by only creating the reference CD-R from your own purchases and not distributing the end result to others.

Ethics, good practice and legalities aside, it is then a matter of using the reference material properly. Get to know your chosen tracks intimately by playing them everywhere you can. In the car, for instance, the body of some productions is lost under the drone of the engine, while others seem to fare quite well. It soon becomes apparent which kind of sounds are important, and which are merely 'fairy dust', only appreciable to those with superior hi-fi systems and ideal listening environments. Not every production sounds great in every situation, although there are usually one or two gems that seem to sound fantastic whatever the limitations of the listening environment or playback system.

Of course, the compilation can be a constantly evolving thing. Some favourite tracks might turn out to be of little use as reference material and should be replaced with others that have very specific characteristics. It might even be worth creating a separate 'bad production' compilation, just as a reminder of what you want to avoid doing to your own music.

Take the time to run the tracks through a narrow-band graphic EQ with spectrum analyser and then alter the level of the bands to see which ones have the most effect. This will help explain why certain mixes work, and where the important energy is centred.

One of the situations in which the reference CD is of great use is in the mastering studio. Mastering engineers are often keen to hear examples of what you want and can bear those examples in mind while processing a mix.

It's also a good idea to take your CD of reference material to other studios when you'll be making important decisions based on the output of unfamiliar gear. If you know how your tracks usually sound, something that is too prominent or lacking will be immediately obvious.

Most of all, though, the reference CD will keep you on the straight and narrow, particularly if you've been working on something for a long time. In such circumstances, the reference tracks should act like a user reset button for your ears.

For more on compiling a reference CD, see the SOS articles at /sos/sep03/articles/testcd.htm and /sos/sep08/articles/referencecd.htm.