Q. What mics should I use for a bigger drum sound? Skip to main content

Q. What mics should I use for a bigger drum sound?

I'm trying to get a bigger sound when recording the drum kit and, after reading the mic guide from SOS July 2005, I was wondering what type of mic I should use. In the article, a matched pair of Neumann U67s was used, but I think these are out of my price range! What polar pattern would be required and would I need two spaced mics? If so, do I need matched pairs?

Editor In Chief Paul White replies: I don't think large-diaphragm mics necessarily equate to a 'bigger' sound, and in the case of drum kits, I'd nearly always stick with small-diaphragm condenser mics as overheads where possible. As a rule, small-diaphragm mics are more accurate off-axis and, as a drum kit has a pretty wide spread, that can help. The main problem with drum sounds — after considering the kit, its tuning and the way it's played — usually turns out to be the room itself, which doesn't affect the close-mic sound too much, but can really ruin what you get from the overheads. If you haven't got a high, great-sounding room, it's often better to try to dampen the room by putting absorbers — such as foam or rockwool slabs — above the overheads to kill reflections. You can then add your own choice of room ambience using a good convolution reverb, if you have one. Rolling off some low-end from the overheads can also clean up the sound, as will gating the toms to lose all that boomy spill. In my experience, unless you have a fabulous room, spending a lot on mics doesn't improve the end result by as much as you might hope, though it is worth experimenting with ribbon mics for overheads, as an alternative to condenser models, since they can give a richer sound. 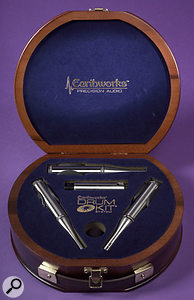 Earthworks' DK25/R drum-mic kit: small-diaphragms make the mics ideal for overheads, but they're not cheap.

Whether you need to match the mics depends on how closely they are specified in the first place, but I'd say that in most cases you can get away with two of the same model that haven't been matched, as long as you adjust the mic-preamp gains for the same level.

I think you're right to rule out the U67s, as they will cost you a lot of money. If you are particularly budget-concious, take a look at SE Elecronics' SE1A, which you can pick up for around £70 each on the street. If you've got more cash to spend, think along the lines of the Rode NT5s, which cost around £270 for a pair. Look out for the NT55s, which are updated versions of the NT5s; they feature a 10dB pad and a low-cut filter, so could be of more use as overheads.

DPA make a selection of suitable mics. The 4091, which uses one of DPA's popular miniature omnidirectional condenser capsules, is best for drums, as it can handle higher SPLs than others in the DPA range. Check out the review in SOS August 2006 and on-line. They'll set you back around £345 each.

Higher up the price ladder, you'll find Earthworks' drum mic kits that also use miniature capsules. The DK25/R (pictured) and DK25/L will both cost around £1450 per set, and if you're wondering which set to buy, remember that 'L' is for live and 'R' is for recording. Interestingly, both sets come with Kick Pad, a useful little gadget that supposedly gives you a 'perfect kick-drum sound' using any bass-drum mic you fancy — such as AKG's D112, Shure's Beta 52 or an Electrovoice RE20 — without the need for EQ.