Q. What PC recording setup should I start with? Skip to main content

Q. What PC recording setup should I start with?

I'm wanting to get a recording setup on my PC, but I don't want to spend a great deal of money. Ideally, I'd like a freeware PC software package with which I can lay down some basic tracks. I need to be able to input MIDI data using my controller keyboard, so something with various sound banks would be ideal.

PC music specialist Martin Walker replies: Many musicians find that the easiest (and most cost-effective) way to get started in PC-based sequencing is to buy a decent audio interface, since many of these are now bundled with cut-down versions of flagship sequencer applications which, despite their 'entry-level' status, are extremely capable. Such bundles change from time to time, but a visit to the interface manufacturer's web site should soon tell you what's currently included. For instance, many M-Audio products bundle Ableton Live Lite 5, while others may feature a cut-down version of Steinberg's Cubase.

If you've already got a suitable audio interface for your purposes, then you could consider a freeware Windows XP sequencing package, such as those I reviewed in last month's PC Musician feature (www.soundonsound.com/sos/sept07/articles/pcmusician_0907.htm). For laying down basic tracks with a MIDI keyboard you might like to try Luna Free (www.mutools.com), which supports both audio and MIDI recording and playback, and provides both piano-roll and event-list editors, as well as supporting VST plug-in effects and VST instruments. Another one to try might be the freeware version of Anvil Studio (www.anvilstudio.com), a more traditional MIDI-based sequencer offering comprehensive Staff, Lyrics, Piano Roll, Drum, Loops, Audio, and Event editors, along with support for a single mono/stereo audio track, which may appeal more if you 'read the dots'. There are also plenty of entry-level applications for sale from developers including Cakewalk and Steinberg (I discussed many of these in SOS April 2005 as part of my 'Easier Alternatives To Flagship Music Apps' feature). 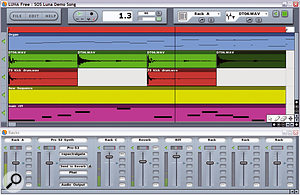 Luna Free is a simple yet effective application which, as its name suggests, is free! It works on Macs and PCs, and can be upgraded (at a small cost), should the limitation of only being able to run four VST instruments simultaneously put you off. Some sequencers do include various software synths that will provide you with a basic set of sounds to help lay down your tracks, but if you want a more comprehensive collection of instruments for a minimal outlay, there are several approaches.

Some people get by with Microsoft's GS Wavetable SW Synth (bundled with Windows), which features a set of General MIDI sounds derived from Roland's well-respected Sound Canvas technology. You simply point to this synth in your sequencer as the output device for MIDI playback, but I suspect this synth will prove unequal to your particular task, since it has a high latency (the time between pressing a key and hearing the sound).

A better solution for you might be a freeware Soundfont player, which is effectively a VST Instrument that you can use inside any VST-compatible sequencer application, in conjunction with your audio interface's low-latency ASIO driver (Soundfonts were originally sample banks in a format that was compatible with Creative Sound Blaster soundcards, but Soundfont files can now be loaded into some software synths). One Soundfont player that I can recommend is RGC Audio's freeware SFZ (www.rgcaudio.com/sfz.htm). Windows already includes a 2MB General MIDI soundbank in Soundfont format (CT2MGM.SF2, which you'll find in your C:\Windows\System32 folder), and you can load this into the SFZ player. A good source of other freeware Soundfont sample banks is Hammer Sound www.hammersound.net).

If you want a versatile selection of more up-to-date sounds and you're prepared to spend some cash, then you may instead prefer the all-in-one approach of one of the virtual studio packages: a single software application that contains a virtual version of everything you might find in an electronic music studio, including synthesizers, sample players, drum machines, effects, a sequencer to record and play back the notes, and an audio mixer to mix them all together. Examples include Arturia's Storm (www.arturia.com), Cakewalk's Project 5 (www.cakewalk.com), FL Studio (www.fruityloops.com), and the one that started it all, Propellerhead Reason (www.propellerheads.se). Demo versions of all of these are available, and are generally fully functional except that you can't save your work.