Q. What pocket recorder should I buy to record my music? Skip to main content

Q. What pocket recorder should I buy to record my music?

I'm interested in buying a small digital stereo recorder that I can use to record my band in a variety of situations, including rehearsals and at gigs in small venues. It would also be handy to be able to record acoustic guitars and so on for possible use on a demo or in a track. There seem to be loads of products on the market, so what would be the best one to go for?

SOS contributor Tom Flint replies: There's a great number of pocket‑sized digital recording devices that incorporate low‑cost condenser mics and exploit the latest generation of SD and Compact Flash cards as a means of storing audio and transferring data. Just about every one of them now has USB connectivity, a speaker for quickly auditioning what has been recorded, data storage capabilities and some basic record and playback processing options. Even handy extras like remote controls, guitar tuners, overdubbing and four‑track recording facilities, effect processors and metronomes are becoming standard as the manufacturers battle to outdo each other.

Generally speaking, though, however comprehensive the spec sheet may look, you get what you pay for on some level. Up to about the £200 mark in the UK, the record quality will be more 'demo' than professional, even though the latest generation of budget recorders are capable of recording at 24‑bit, 96kHz. This is due to the lower‑quality preamp circuitry and microphones producing a relatively high noise floor and compromising the audio in other, subtle ways. That said, even the cheaper ones are still capable of making surprisingly well‑balanced recordings, and a standard feature is an external mic input supplying some level of phantom power, so there is the option of hooking up better microphones, albeit at the expense of the pocket recorder concept! 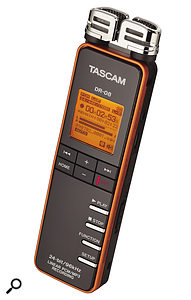 Though, in many areas, you get what you pay for in hand‑held recorders, the features of some less expensive models sometimes outdo their expensive counterparts. The flexibility of the Tascam DR08's adjustable capsules offers more recording options than the higher‑quality DR2d, for example. 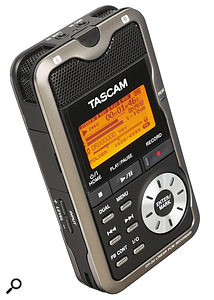 What is a little curious is that many budget products outdo their high‑end counterparts in some areas. Tascam's new DR‑08, for example, has a pair of highly adjustable, independently articulating capsules on the front, offering a range of recording possibilities, whereas the manufacturer's more expensive and better-sounding DR2d has fixed mics and is only configured for omnidirectional recording. Similarly, Yamaha's W24 has to be connected to a computer using a USB cable, whereas the cheaper C24 has a more convenient, memory stick‑style retractable USB connector. Furthermore, some professional products don't bother with MP3 or 96kHz recording. In other words, paying more does not necessarily mean extra options or convenience.

Paying more does tend to translate into quality, however, and products priced from about £200 up to £400 in the UK offer much better shielding from handling noise, superior build quality, improved metering and, of course, better mics and preamps. If you can afford it, and the recordings to be made are intended for commercial use, these are certainly the ones to go for.

The problem at this level is deciding which microphone configuration best suits the sort of recording jobs the product is going be used for most often. To record guitars, for example, something with an X‑Y (coincident pair) mic configuration is arguably more desirable than other designs, as the setup tends to result in focused recordings with good stereo imaging, so long as the capsules are well matched. Yamaha's W24 is a good example of a product of this kind, as is Zoom's H4M, although the latter can also be adjusted for wide‑angle recording.

Omnidirectional setups might be a better bet for band rehearsals, though, as the recorder could be mounted on a mic stand in the middle of the room (a metal screw thread is usually embedded in the underside for stand mounting), capturing the sound from all around. Tascam's DR2d and Sony's PCM M10 are both designed with omnidirectional characteristics, the latter using electret condenser capsules.

It becomes necessary to pay a little more for products that are capable of both omnidirectional and coincident‑pair recording. Tascam's DR100 and Sony's PCM D50 are serious professional products that fall into this category, and can be bought for a little under £500 in the UK. Naturally, these also come with a host of other professional features, although, on the down side, they are relatively heavy and large and, therefore, not so pocket‑friendly.

For live gigs and use in darkened rehearsals or atmospherically lit recording sessions, a large bright screen, displaying clear metering, is vital. If record levels are set wrongly, the mistake could compromise or ruin a take, so accurate visual feedback is important. It tends to be the mid‑priced recorders that supplement the metering with warning LEDs, indicating when clipping is occurring, and some, like the PCM D10, also have green LEDs that illuminate when a level of ‑12dB is reached. In most cases, these provide extremely useful feedback, particularly for the self‑recording musician.

A remote transport control is another very useful thing to have when working in rehearsal spaces and small venues, as it enables someone on stage to discreetly trigger recording from afar. Several recorders ship with remotes as standard; the Yamaha Pocketrak and Tascam DR2d both have remotes with a range of seven metres. Others, like the Sony PCM D10, use cables, which is clearly less convenient.

Looking at the market as a whole, there isn't one product that is best for every recording situation, so the choice as to which one to buy will have to depend on what it is going to be used for most frequently.

Top 10 Boring Things That Are Really Important In The Studio
1 week 5 hours ago.