Q. What setup should I adopt? Skip to main content

Q. What setup should I adopt?

I have just purchased a Macbook Pro and will be buying Ableton Live 6 soon. I have also bought a Korg Electribe MX1, with the intention of making house and techno music.

Next on my list is an audio interface, a pair of monitors and, if there's any change from £550, a controller. I've been looking at the M-Audio Firewire 410 and Focusrite Saffire interfaces, and either Tapco S5 or Fostex PM1 monitors. If I do have enough money for a controller, it'll have to be quite small, as I have a bedroom setup with limited space.

News Editor Chris Mayes-Wright replies: I think you're on the right lines with the products you've mentioned in your question, but there are a few things to consider. Let's start with the audio interface. As you're using a laptop, it would be handy for you to get an audio interface that can be buss-powered, meaning that you don't need a dedicated power supply to operate it and you can use your system in a completely 'mobile' manner. Also, your Korg Electribe MX1 has four mono audio outputs — a main stereo output and a pair of assignable 'individual' outputs — so another consideration would be to ensure that you get an interface with at least four analogue inputs, so you can make the most of your MX1's output capabilities. 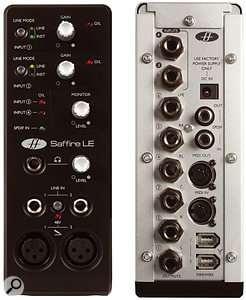 A rare case of less is more: Focusrite's Saffire LE has two more audio inputs than the higher-end model.

And here lies the first problem: despite both the M-Audio Firewire 410 and Focusrite Saffire having four inputs and 10 outputs, two of each of those are used by the digital S/PDIF buss, and you'll need an analogue-to-digital converter to get all four of your Electribe's outputs into your computer. However, if you're not too bothered about the on-board DSP that the Saffire boasts, the cheaper Saffire LE (which has an RRP of £229, compared to £299 for the standard model) features the extra pair of balanced line inputs you need, plus the stereo S/PDIF and combination analogue inputs that its older brother has. The closest thing M-Audio have is the Firewire 1814, which is good, but a little over-specified for your purposes; besides, it would gobble up most of your budget, so I'd recommend checking out products from other manufacturers, such as Edirol and Emu, before committing yourself.

On to monitors then, and your initial thoughts about the Tapco S5s and Fostex PM1s. It's almost impossible to recommend a pair of speakers just from looking at the spec sheet, so the best advice I can give is to visit your local retailer and try some out with reference material that you're familiar with. Often, the retailer will have a listening room, but if you can twist their arm enough to get some speakers on loan, you're on to a winner. It may be the case that they'll only do this if you're spending top-dollar on some speakers so, within your budget, I think this option may be unrealistic, but it's always worth a try.

Considering that you'll probably have to spend around £250 on the audio interface (don't forget some decent cables), there should still be around £300 in your pocket. Monitors in this price bracket include the two that you've mentioned, plus models from Tannoy — the Reveal Active 5A, costing under £230 per pair including VAT; Alesis, with their M1 Active 620 (£300 in the shops); KRK (the RP6, at £299); Tapco, whose S8s cost £150 each; and Yamaha, whose MSP5s are discontinued but are still available at the larger retailers and are a bargain at £240 per pair.

At this stage, if you've kept within the budgets, I'm afraid to say that you'll be broke, with only a few pence left for some milk and bread and maybe a trip to the launderette; certainly not a control surface. But if you're in the market for one in the next few months, can I make you aware of the Presonus Faderport, which should have landed in the UK at the end of September. We haven't seen it in the flesh yet, but it promises to be a useful little gadget. It's a neat desktop unit with one motorised fader, transport control and a host of general workflow-enhancing buttons. The best thing is that it will cost just £159! For house and techno, however, you'll probably want a swarming expanse of knobs so you can tweak those filters like there's no tomorrow. With this in mind, look out for Novation's Remote Zero SL, costing £229 (it's reviewed in this November 2006 issue). It has 16 knobs, eight faders and loads of assignable buttons, plus transport control and an impressive LCD. Usefully for you, as an Ableton user, its Automap software has a template for Live, so you can just plug it in to your Mac (it's class-compliant, too, so no drivers are required) and start making tracks. On the lower end of the scale, there are plenty of different models — from pad controllers to more knobby units — available from the likes of Akai, Kenton, Korg, M-Audio and Novation; visit their web sites for more information.

It's worth mentioning that, when buying your items you may be able to get a bit of discount if you buy them simultaneously. Purchasing like this often gives you a bit more leverage to haggle; think along the lines of "I'll buy this as well, if you throw in some cables".