Q. What should I consider when recording outside? Skip to main content

Q. What should I consider when recording outside?

Hugh: Recording outside presents a whole different range of problems and challenges than working in the studio, but almost all are of a technical nature. The basic concepts and practices of mic placement are unaffected; you still need to position a mic where it can 'hear' the best balance of sound emitted from the source, and where the rejection null (or nulls) of its polar pattern reject the most unwanted noise. 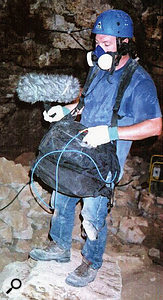 Photo: Picture supplied by Steve Whitford Paul: But perhaps the most obvious problem with working outdoors is that of wind noise, and it's crucial to take measures to keep the air currents caused by wind away from the mic capsule. Simple foam windshields can help, but only to a limited degree. If you look at the setups employed by professional TV and film sound recordists (such as the one of Steve Whitford (right), recording in a bat-populated cave in Israel), you will usually see them working with microphones mounted inside large zeppelin-shaped devices, often covered with fake fur: the proverbial 'dog on a stick'. Several different manufacturers produce such things, but the best known is Rycote (based in Stroud, UK), to the extent that some people use their trade name as a generic term for all such products.

Hugh: The main basket of the Rycote system is designed to set up an area of still air around the microphone capsule, and the larger this volume of still air, the better the wind-noise attenuation will be, which is why effective windshields are inherently large things. Moving air has to flow around the basket, keeping turbulence well away from the microphone and its mountings. However, pressure changes, including those caused by sound waves, still affect the pressure of the internal still air, and so the microphone still 'hears' the sound, without the rushing wind noise that would previously have rendered any sound unusable.

Paul: The fake fur used on the outside of the basket works on the same principle as the fur on an animal. The energy in the wind is dissipated by having to force all those hair fibres to move about, with the result that there is even less turbulence and wind noise at the 'skin' surface. Usefully, the fur also helps to reduce the obvious pitter-patter of rain too, by decelerating the rain drops slowly as they hit the fibres; at least up until the fibres become saturated and matted. 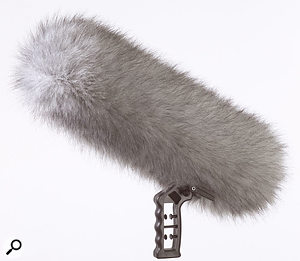 Photo: Picture supplied by Steve Whitford Hugh: Alongside the need to reduce wind noise, there is often a requirement to suspend a microphone, particularly for film and TV work, where the mic has to be out of camera shot. This requires the use of a 'fishpole' which, these days, will be made from lightweight carbon-fibre. Even so, it requires a skilful technique to avoid transmitting handling noises up to the microphone via the pole.

Paul: Recording out of doors obviously involves working with ambient noise all around; that's often why we're recording outside in the first place. Stereo recordings capture a broad sound-stage area, with all the appropriate ambience in the appropriate spatial positions. However, if you are looking to record an individual, isolated sound you can have a problem. You can't ask the birds to stop singing, or get the traffic on the motorway to stop for 10 minutes while you try to record the sound of a quiet croaking frog, for example! So the only option is to use very directional microphones and work in mono, to try to exclude as much ambient sound as possible. You can then mix your isolated mono sound with a separate stereo ambience to create a pleasing ensemble, if necessary.

Hugh: Cardioid and supercardioid mics can be used for location recording, but often something more directional is needed, and that's where the shotgun or rifle mic comes in. Essentially, this is a hypercardioid capsule arrangement with a long 'interference tube' attached in front of the diaphragm. The tube helps the mic to become much more directional at high frequencies, helping to reject more of the unwanted ambient sound. The longer the tube, the lower the frequency at which the mic is very directional. Most mics of this type are about a foot long and pretty directional from about 1kHz upwards.

Paul: The down-side of the interference tube design is a very 'phasey' character to off-axis sounds. If you look at the polar response of a rifle mic, it looks like a squashed spider, with narrow peaks and deep nulls all over the place. Those peaks and nulls are in different angular positions at different frequencies, so any off-axis sounds that move in relation to the mic will tend to sound as though they are going through a phaser or flanger, which is obviously not good. You therefore have to be careful about moving the mic, and when recording near moving sources.