Q. Which mixer should I choose for drum recordings? Skip to main content

Q. Which mixer should I choose for drum recordings?

I'm looking for something to record my latest project with. I currently own an Apple iMac running OS X Tiger, and the main program I use for recording is Apple's own Soundtrack. I'm thinking of upgrading at some point to Logic Pro 8, but for the moment I'm with Soundtrack. I have eight Audio Technica mics for the drum kit and I'm really looking to record through a mixer into Soundtrack (Logic in the future). However, I still want to be in control of individual mic levels after I've recorded within Soundtrack or Logic, even having those individual mics on different tracks.

I'm wondering if you could help me in choosing some kind of mixer with eight XLR inputs that will let me control individual tracks within the drum mix afterwards? 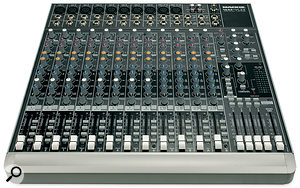 SOS Reviews Editor Matt Houghton replies: Dilemmas like this are rather difficult to advise upon without knowing anything about your budget, but I'll try...

Let's start with the cheapest and simplest option. If you plan to do all the mixing and processing 'in the box', you don't really need a mixer at all: you just need an audio interface and sufficient mic preamps. Something like the recently announced Focusrite Saffire Pro 40 would give you all of this in a single unit, and although I've not used it myself I hear good reports, and it looks to be very decent value. Alternatively, you could choose an interface with eight line inputs and use external mic preamps — or, of course, a mixer. There are so many interfaces you could use with this, at so many different prices, that I can't really list them here, but most recent 24-bit interfaces should be up to the job.

If you want to use an analogue mixer to feed the line inputs of your interface, I'd suggest something like the Mackie 1642 VLZ3, taking a feed from its direct out sockets. It will probably have more functions than you need, but I doubt you'll find eight preamps of this quality in anything cheaper — the VLZ3 series preamps are neutral sounding and offer plenty of headroom. Mixers, of course, can be useful if you want to add some processing while recording — meaning that if you like to tweak EQ and compress to get the right sound before recording, so that you only need to do smaller tweaks in the computer, a mixer would still be a good option. Personally, unless you're used to working in that way, I'd opt to do that in the computer, but mixers can also double up as monitor control systems, without running the risk of latency in your computer, which is useful if you're doing a lot of recording. Alternatively, choosing a mixer with Firewire or USB2 connectivity would mean there's no need for a separate audio interface. Something like the Alesis Multimix Firewire 16 would do the job, offering you all the preamps and I/O that you need to record your eight tracks simultaneously. Whichever option you choose, you just need to select the appropriate audio interface driver in your DAW and assign the physical input channels of your interface to separate software input channels in your DAW. In this way you can record several tracks simultaneously, so that you can do whatever you want with them in your DAW software.

Speaking of your DAW, I must admit that I'm not that familiar with Soundtrack Pro. I believe it offers sufficient input tracks and I know that you can do plenty of processing in there, but I suspect it will lack some of the useful features commonly found in music-oriented DAWs such as Logic, Cubase and Pro Tools. You could certainly do worse than purchasing Logic, as it comes with a great bundle of plug-ins as standard and the current price is very competitive. If that's too pricey, there's always Logic Express, from which you can upgrade to Logic Pro when you can afford it.