Q. Which settings should I use to encode tape cassettes? Skip to main content

Q. Which settings should I use to encode tape cassettes?

I need to digitally encode some old tape cassettes and am wondering what bit depth and sample rate would be optimal. The source material is a mixture of old demo tapes, pre-recorded music tapes, and speech (lectures and audio books). I'll be recording on a Mac via an audio interface. I'm also wondering whether I should have Dolby switched in on the tape deck.

SOS Technical Editor Hugh Robjohns replies: The audio bandwidth of old cassettes will struggle to reach 20kHz, and the dynamic range will be 60dB or less, so ingesting (converting and importing) the audio at 16-bit/44.1kHz would capture all there is to capture, and provide easy compatibility with whatever storage or replay format you are likely to want to use. 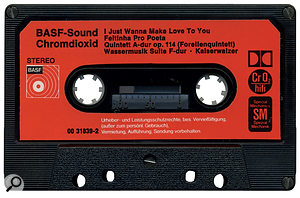 The audio bandwidth of an old cassette is unlikely to exceed 20kHz, so digitising at 16-bit/44.1kHz will produce a perfectly usable file with good compatibility across systems.

It's usually very easy to audition the effect of switching Dolby noise reduction in and out, and you can then decide for yourself what sounds best. However, I usually find that the dynamic HF boost applied by the Dolby B encoding process is countered pretty well by the inherent self-erasure of high frequencies that afflicts old cassettes. I thus generally prefer to ingest old cassettes that were recorded using Dolby B with the decoding switched off.

The Dolby C situation is a little less clear cut, because Dolby C is a much less benign noise-reduction system and far more prone to unpleasant mistracking side effects. It's often necessary to get into the cassette machine and tweak the replay level into the Dolby C decoder to optimise the output quality, but that's not really something that the novice should be experimenting with!