The focus this month is on checking and improving the performance of your PC, with a new benchmark test just released and news of a useful tool that could help you pin down the source of latency-related problems.

As the majority of hi-tech musicians these days run lots of plug-in effects, how many simultaneous plug-ins a particular PC can run is a good indication of its limitations. A 'benchmark' test such as DAWbench (www.dawbench.com), which started life as a real-world song and then ignored the application's 'CPU meter' in favour of adding more and more plug-ins across 40 audio tracks, until audio glitching was heard, is therefore a good way to compare the relative performance of different PCs, or check whether your PC performance is all it should be.

While the original DAWbench Blofelds DSP40 test was for Cubase/Nuendo users only, this month sees the release of a new 'DAWbench DSP Universal' benchmark test that will be able to run on any multitrack audio application, and finally lets us compare the performance of different sequencers running the same plug-ins.

The new test relied on finding a plug-in that was sufficiently taxing to fully load today's fastest PCs without requiring hundreds of instances to be launched, yet was freely available to all. Over the last six months or so, Vin Curigliano and other members of the DAWbench forum have evaluated various alternatives, including iZotope's freeware Vinyl and the 30-day demo version of Sonalksis' CQ1. However, the most suitable candidate proved to be ReaXcomp, the multi-band compressor bundled with Cockos' Reaper, which is now also available in a freeware VST plug-in version (www.reaper.fm/reaplugs). 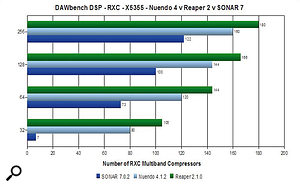 The new DAWbench Universal benchmark not only lets you compare the audio performance of different PCs, but also of the same PC running different sequencer applications. These initial results are for three separate applications running on an Intel eight-core machine.As I write this, the DAWbench DSP Universal benchmark is already downloadable as a song template for Cubase, Nuendo 4.1.2, Reaper 2.1 and Sonar 7.02, with more applications to follow. It comprises four stereo audio music tracks, one stereo sine-wave audio track with no effects, so you can easily hear the first signs of audio glitching, plus 40 stereo sine-wave audio tracks, loaded with a variable number of plug-ins, which you activate one by one until you hear audio spikes or break-up.

Initial tests with quad-core and octo-core systems suggest that Reaper is consistently in the lead, letting you load every available CPU core to almost 100 percent (as shown in Windows Task Manager) before audio glitching occurs, whereas the other applications don't manage to balance the load as evenly between cores, and therefore can run fewer identical plug-ins before glitching kicks in.

The differences between Nuendo and Reaper increase as buffer size reduces, but can be up to 10 percent at 64 samples and below with a quad-core system, and 20 percent with an 'octo'. The current version of Sonar is lagging behind the other two applications at the moment.

While sequencer feature sets may differ hugely, for the many musicians who judge performance by how many plug-ins they can run on a particular PC these results will be a revelation. Now that we can directly compare the performance limits of different applications running the same audio tracks and plug-ins it will be interesting to see how users react.

In SOS January 2008 I discussed multi-core processors, and in particular the benefits they might provide with audio applications. I also mentioned that Cubase 4 and Nuendo 4 didn't currently provide all the benefits they could at low latency with a dual quad-core system, and that Steinberg developers had already acknowledged the problem and promised to address it in the first maintenance updates after the release of Nuendo 4 and Cubase 4.1.

Well, there's been an unexpected twist in this tale. Although plenty of musicians with cutting-edge octo-core systems experienced the low-latency limitations of both Cubase and Nuendo, one of the people who spent the most time and energy investigating these issues, using his DAWbench tests, was Vin Curigliano, who has also stumbled recently across a way to improve matters.

All he did was perform a routine BIOS update on his Dual Xeon quad-core 5355 PC (with eight cores running at 2.66GHz), and was flabbergasted to find he could run around 30 percent more plug-ins with a buffer size of 256 samples before his PC starting glitching, and a massive 130 percent more at 32 samples!

Although this BIOS update was specific to his particular motherboard, and the list of fixes in that update didn't mention anything that might suggest the source of these improvements, it's surmised that they are due to Intel 'microcode' updates — tweaks and bug-fixes for Intel chips that are installed by the BIOS (or the operating system) each time you boot your PC. Chip manufacturers sometimes send these out to motherboard manufacturers, and they then get discreetly bundled into the next BIOS update.

This supposition was strengthened when other users of octo-core systems featuring Intel's 5000X motherboard chipset (including Dell's Precision 690) discovered similar improvements after their own routine BIOS updates. Octo-core performance with other applications (including Sonar) also improved after these BIOS updates, but not by such a significant amount, perhaps due to the different ways in which each application splits the various audio tasks into multiple 'threads'. It will also be interesting to see if owners of eight-core Mac Pro computers featuring Intel Xeon 'Harpertown' processors experience similar improvements as a result of an EFI (Extensible Firmware Interface) update from Apple.

So many musicians are now running audio software on PCs while connected to the Internet that I make no apology for returning to the subject of virus and spyware utilities and their impact on PC performance. 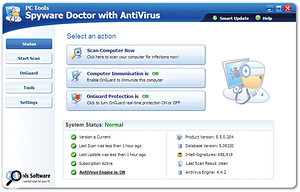 Why run separate spyware and anti-virus utilities on your PC for Internet protection, when you can run Spyware Doctor with Antivirus 5.5 as a single task, and potentially reduce operating system overheads?In PC Notes October 2007 I discussed ways to adjust virus checkers to run on demand, rather than constantly in the background, thus minimising their effects on real-time audio performance. In my experience, virus attacks are becoming far less frequent, so I wasn't too concerned about offering this advice, but other 'malware', including spyware, auto-diallers, keyloggers and trojans, is still on the increase, and its components can reside in many different areas of your PC. So, if you insist on connecting your music PC to the Internet, I would recommend that you always leave a background spyware checker running while you're connected, since it's generally far better to stop nasties getting into your system in the first place than attempt to remove malware that's already infested your PC.

In June 2007's column I reviewed the excellent Spyware Doctor version 5.0 from PC Tools (www.pctools.com). I mentioned in that review that you could buy it with an optional upgrade to integrate the functions of the PC Tools Antivirus utility, and also that combining spyware and virus searches was likely to speed up scan times and reduce the potential for conflicts, compared with using two separate utilities.

When Spyware Doctor was recently upgraded to version 5.5, I decided to check out this integrated approach myself and see whether I found running Spyware Doctor with AntiVirus 5.5 better than running separate spyware and virus-checking utilities. Version 5.5 incorporates further advances in removing 'rootkits' (stealth programs that run at a 'lower' level than the user can see with normal software utilities) and protecting network Registry settings, and can identify potentially malicious threats earlier, for enhanced real-time protection. It also provides a simpler categorisation of threats and has a smaller RAM footprint.

After installing Spyware Doctor with AntiVirus and accepting its offer to activate various OnGuard real-time protection routines, I disabled my previous real-time virus-checking utility (Avira's freeware AntiVir PersonalEdition Classic, from www.free-av.com), and let SDAV carry on as the sole spyware and anti-virus monitor. During the following weeks it caught every nasty I exposed it to, blocking downloads from suspicious web sites, preventing Windows Explorer from opening infected files or emails, preventing malicious changes to my browser, and so on.

I experienced no noticeable extra overheads as a result (there's a 'Lower scan priority to reduce CPU usage' option that helps), but those who want to selectively disable real-time Internet security tasks while off-line, to squeeze the maximum performance from audio applications, can enable and disable the entire suite of OnGuard tasks using a single key-click. Make sure, also, that you remove the default Scheduled Task so that scans only occur when you ask for them.

As long as you always leave the OnGuard tasks running in the background while you're on-line, you shouldn't need to perform a more comprehensive scan of your hard drives very often. A full system scan using SDAV can take a long time, because it's relatively thorough, but for more general use the Intelli-Scan option will detect and disable active threats in just a few minutes.

You might ask why I was interested in investigating SDAV when I was already running a perfectly good freeware AV checker alongside the original Spyware Doctor. Well, the overall subscription for installation of SDAV on up to three computers, including new versions, unlimited smart updates and customer support for one year, is just £5 ($10) more than SD alone ($39.95 instead of $29.95), making the anti-virus components very good value for money. However, compared with running separate spyware and anti-virus utilities, the most practical day-to-day benefits for me were a speedier boot-up time for my PC and the time-saving aspect of only having to download updates for a single security tool instead of two.

Some musicians buy or build a new PC and achieve glitch-free, low-latency audio recording and playback fairly easily, while others experience occasional clicks and pops whose cause can be difficult to track down. I've devoted thousands of words to the many and varied causes of such interruptions (most notably in the SOS October 2006 PC Musician feature), but here's a handy tool that you can use to both check your system and investigate the causes of audio drop-outs. 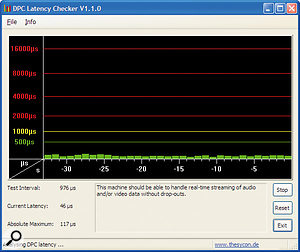 If you find you can't run your audio interface at low latency, this DPC Latency tool may help you track down the cause of the problem. Thesycon's DPC Latency Checker (www.thesycon.de/eng/latency_check.shtml) is a Windows utility that polls the DPC (Deferred Procedure Call) latency once every second and displays the results in a horizontally scrolling graph. Hardware drivers issue periodic interrupts, and Windows deals with these as soon as it can, on a first come, first served basis (the DPC).

Unfortunately, some hardware spends too long dealing with its DPC routine. Readings under 500 microseconds (the green zone) are fine; those between 500 and 1000 microseconds (or 1ms) are borderline; and those beyond (the red zone) may result in audio interruptions. The beauty of this tool is it lets you spot occasional spikes above the norm and see how often they occur, which can be a great help in tracking down the culprit.

My PC typically measured around 50 microseconds, with occasional peak values of about 100 microseconds, but other musicians have reported occasional peaks of over 2000 microseconds (network adaptor cards are often the worst culprits, and particularly wireless ones). If you measure occasional high peaks you won't be able to run your audio interface at such a low latency, and should disable individual devices one at a time in Device Manager to find out which one is causing the problem.