Just as Superspeed USB 3 is starting to appear as standard, there's a new kid on the block. So what's so great about Thunderbolt?

Ironically, now that musicians are finally seeing 'Superspeed' USB 3 ports appearing routinely on new PCs, musicians already seem to be getting very interested in the next contender: Intel's 'Light Peak' technology. I first mentioned this in PC Notes August 2010, when, as its name implied, it used optical cables that could remarkably be up to 100 metres long, and, of course, completely removed any chance of ground-loop problems.

However, along the way, Apple collaborated with the project to help get it onto the market, the optical cables were temporarily dropped in favour of cheaper copper ones with Apple's Mini DisplayPort (mDP) connectors, and the technology was renamed Thunderbolt (which I'm finding very hard to remember).

Coming soon to a PC near you: 10Gbps Thunderbolt technology is intended to replace PCI Express, SATA, USB, Firewire and external video connections, and could become the new audio interface standard.

Name changes apart, Apple's collaboration should ensure Thunderbolt a very rosy future, since it will now appear on both PCs and Macs, further encouraging third‑party manufacturers to design peripherals for it. By offering a direct connection to the PCI Express bus, the bi‑directional Thunderbolt ports are capable of an impressive 10 gigabits per second (a full‑length HD movie can be transferred in less than 30 seconds), which translates to 20 times faster than USB 2 and 12 times faster than Firewire 800.

With this level of performance, it's hoped that it will become a universal replacement for PCI Express, SATA, USB and Firewire, and it can also double as a connector for a high‑resolution video display, so you could use your monitor as a hub to attach further Thunderbolt peripherals. Apple have already launched the first computers on the market featuring this new I/O technology (the latest MacBook Pro models), while Apogee R&D and Universal Audio have also announced their intention to develop audio hardware for it.

One of the big attractions is that Thunderbolt cables can carry video, audio, data and power at a real‑world speed of 800MB/s, and can be daisy‑chained, so we might find fewer cables sticking out of our PCs in future. Even better, with this amount of bandwidth on offer, we might finally see an end to the 'USB or Firewire audio interface?' arguments, since Thunderbolt also offers low latency and highly accurate time synchronisation. It could indeed become the new peripheral standard.

I've mentioned the excellent MIDIOX (www.midiox.com) freeware utility for MIDI fault‑finding on many occasions in this column; it's amazing how often the cuase of problems turns out to be data being sent on the wrong MIDI channel. However, MIDIOX is capable of much more, so I thought that this month I'd explain how I use it to process the data from my controller keyboards.

I've got two (a little two‑octave job for editing and an 88‑key one for performances), so what I really need is a way to individually tweak them in different ways. This is where MIDIOX comes in, along with the freeware Maple virtual MIDI Cable (www.maplemidi.com/Maple_driver.html). Just install the latter, then in MIDIOX, open the MIDI Input ports connected to your keyboards, and one or more of the new Maple MIDI Output ports, so that incoming data is sent on to these after being modified. You then use Maple MIDI Inputs instead of the normal ones in your sequencer. 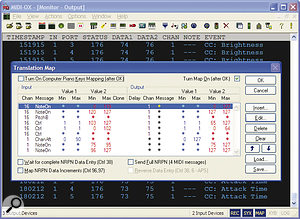 Here's how I individually process the data coming from two keyboards with the MIDIOX Data Mapping functions. Very handy!Now the clever bit. Get each of your MIDI keyboards to output on a different MIDI channel, and then you can use the MIDIOX Data Mapping option to change the velocity response, mod-wheel action, aftertouch — anything you like — on each channel separately. Finally, change this MIDI channel in the output area of the mapping window to its final channel (for instance, in the screenshot below you can see that I've 'massaged' incoming Channel 16 data and converted it to output on Channel 1). This way, all your keyboards can be tweaked individually but end up outputting on the same channel. It works for me!

Sandy Bridge Under Control: As I write this in mid‑March, Intel are starting to ship their revised Cougar Point controller chips after the recall of the ones with the 'design issue'. Audio PC builders tell me that updated Sandy Bridge motherboards are now trickling through, while MSI have already launched several new SB notebooks.

AMD Fight Back: Meanwhile, AMD are apparently claiming that their forthcoming high‑end 'Bulldozer' CPUs, such as the eight‑core FX‑81x0 models, will give comparable performance to Sandy Bridge, since they offer more cores and overclocking potential. Let's wait and see.