Seven top 10 singles isn't bad going for a career, let alone one album, yet that's precisely what Bruce Springsteen achieved with his smash hit 1984 LP, Born In The USA. This is the story of how it was made... 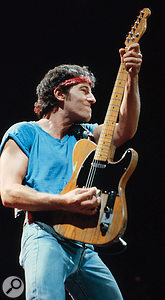 The mid‑'80s were the apex of Bruce Springsteen's still‑flourishing career. Not only did Born In The USA become the most successful album he has ever released — selling more than 15 million copies in America and 30 million worldwide — but it spawned seven top 10 US singles, tying it for the record that is currently also held by Michael Jackson's Thriller and Janet Jackson's Rhythm Nation 1814. To date, those songs — 'Dancing In The Dark', 'Cover Me', 'Born In The USA', 'I'm On Fire', 'Glory Days', "'I'm Goin' Down' and 'My Hometown' — still comprise more than half Springsteen's present tally of 12 top 10 hits, while the title track is a radio staple and a regular at Fourth of July celebrations.

Nevertheless, despite its anthemic chorus and the fact that President Ronald Reagan tried to utilise the song for his 1984 re‑election campaign, 'Born In The USA' is not the energetic paean to flag‑waving patriotism that many people initially thought — and some still think — it to be: "I got in a little hometown jam / And so they put a rifle in my hands / Sent me off to Vietnam / To go and kill the yellow man.”

Focusing on a small‑towner who, after trading jail time to serve his country, returns home an outcast and can't even find work at the local refinery, Springsteen's song, far from appealing to the jingoistic, actually flushes the American Dream straight down the toilet. And it does so with a intense passion that is stirring and infectious. That is, on the hit version, with its thunderous drums and then‑contemporary synth backing. Yet, as originally recorded by 'The Boss' and eventually issued on his 1998 Tracks four‑CD box set, the acoustic demo is, in line with its desolate message, both stark and funereal. 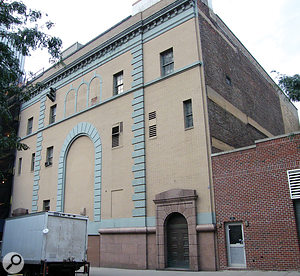 The Power Station on West 53rd Street in Manhattan.

It was in 1981 that writer‑director Paul Schrader asked Bruce Springsteen to write the title track for a movie about a blue‑collar bar band. This had the working title Born In The USA, and Springsteen came up with the song of the same name while working on a track called 'Vietnam'. Schrader would eventually rename his film Light Of Day after Springsteen, who turned down the lead role that subsequently went to Michael J Fox, provided him with a replacement song in the form of '(Just Around The Corner To The) Light Of Day', recorded by Joan Jett.

"'Born In The USA' didn't sound like the Bruce Springsteen that I had mixed on his previous two records,” says Toby Scott. "I didn't know what Bruce wanted the track to sound like, but what the producers and I definitely knew was that it sounded sensational.”

In addition to serving as an engineer on 18 Springsteen albums and numerous live performances, Scott has also recorded artists ranging from Bob Dylan, Natalie Merchant and Steve Perry to Manhattan Transfer and Little Steven & The Disciples Of Soul. Musically inspired by the Ed Sullivan Show TV appearances of both Elvis Presley in 1956 and the Beatles in 1964, Scott taught himself to play guitar as a high‑school student in Santa Barbara, California, during the mid‑'60s. Then, after playing bass in some local garage bands, managing a couple of them, studying music theory and orchestration in college, and working for concert lighting and production companies in conjunction with acts such as Jimi Hendrix, Led Zeppelin and Blind Faith, he began engineering, recording his own songs with a TEAC 3340S simul‑sync four‑track tape recorder and six‑channel Sony mixer.

In 1975, two six‑week engineering courses led to Scott securing a job at LA's Clover Studios, owned by A&R/producer Chuck Plotkin. There, in the course of assisting on an album by Robert Palmer and recording others by Booker T & The MGs and Harry Chapin, he honed his craft by learning from the likes of Steve Cropper, producers Tom Dowd and Steve Smith, and engineers Phill Brown and Richard Digby‑Smith. It was quite an education, yet Scott still had plenty to learn about Bruce Frederick Joseph Springsteen when, in the spring of 1978, he first encountered the man with whom he would forge his most prized professional relationship.

"I had heard of Bruce some time earlier as being 'the next Bob Dylan', but that was about it,” Scott now recalls. "Then, when Chuck Plotkin came in with this kid, I quickly realised he was about the same age as I was, about the same size, about the same everything — we were like two peas in a pod. We both weighed about 130lbs; I'm 5'11”, Bruce is 5'10”, and he was very down‑to‑earth. Chuck needed to mix one of the songs for the Darkness [On The Edge Of Town] record, and after we spent one or two days on it we sequenced the record and mastered it.” 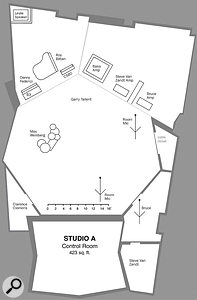 The layout for 'Born In The USA' in the Power Station's (now Avatar Studios) Studio A.

Following this assignment, Toby Scott became Clover's manager and chief engineer, and just over a year later he began combining these roles with independent work at other studios. In 1980, he assisted Chuck Plotkin on the mix of Bruce Springsteen's album The River. This was after Neil Dorfsman and Bob Clearmountain had already tried their hand at it.

"I went into Clover on a Monday and put up a mix,” Scott recalls, "and Bruce, who would always stay in the upstairs lounge, came down to listen and said, 'It sounds pretty good, but it sounds funny. It doesn't sound right.' I said, 'Well, what's wrong?' and he walked behind the console and said, 'The drums. Didn't we use some room mics?' I said, 'Yeah, they're on these two faders.' I had them all the way down, about an inch from the bottom, and Bruce took them and jammed them all the way up to the top. Immediately, the sound was all room, and so I said, 'Oh, OK... Well, now that I've got the concept of what you're looking for, let me just rebalance stuff.'

"I can't remember which song it was, but clearly he wanted the room in there, and that was fine — I roll with the punches. So, I rebalanced it for the room, readjusting stuff to account for the drums sounding like they were coming from the other end of a basketball court, and when Bruce came back down and listened he went, 'That's it! Great! Good deal!' The next day, we did another song. At that point, Neil [Dorfsman] was coming in, looking over my shoulder for the first 10 or 15 minutes and going, 'Now, this is the saxophone that we use, and then you use the guitar on this track for the first part of the solo and the guitar on that track for the second part of the solo...' This was how we worked on the Monday and Tuesday, and then on the Wednesday, after a couple of hours working on another song, I took a break, saw [Springsteen's manager/producer] Jon Landau out in the hallway, and when I asked him where Neil was he told me Neil was in New York. 'You're doing fine,' he said. 'Don't change anything, just do what you do.' Whatever the differences were in our mixing, they apparently liked my style.”

The track sheet from a safety copy of 'Born In The USA'.

A couple of months later, Toby Scott found himself using the Record Plant's remote truck to record some Bruce Springsteen concerts. Then, after mixing Gary 'US' Bonds' On The Line album in March 1982 — for which Springsteen wrote seven of the songs, co‑producing them with Steven Van Zandt — Scott was asked to fly to New York to not only mix Van Zandt's own Men Without Women, but also to record Springsteen's Born In The USA at the Power Station.

"From noon until six, I was working at the Hit Factory, mixing Steve Van Zandt, and then from seven until one in the morning I was with Bruce at the Power Station, recording basic tracks,” Scott explains. "Eventually, Steve was so excited by the mixes and the perspective, he wrote four more songs that I recorded and mixed, and in all I ended up spending about four months in New York.

"Bruce had recorded The River at the Power Station, which he liked because of the ambience of the main room, but I had never worked in a control room like that. Most all of the control rooms in Los Angeles were of the dead variety, or acoustically treated so that anything by the speakers was live while the back of the room was dead [or, later, the other way around]. It was therefore strange being in the Power Station environment where everything was very live.

"The floor in the control room was wood, all of the walls were wood, the ceiling was wood, and the ceiling was not sloped whatsoever, whereas Los Angeles studios in the '70s and early '80s had gotten into this design that had a focused mix point. The Altec 604E monitors would be up on the wall above the control-room glass, pointed at an angle down towards a focused mix point. From there, the ceiling would be sloped down to about six or seven feet above the head of the focused mix point, and it was like sitting at the cone of a big speaker. The Power Station was just a rectangular room, with the speakers actually hanging from cables or track on the ceiling, and it was fabulous. To this day, I will declare the best rooms I have ever worked in are those that are either designed or run by active engineers: not people who used to do it, not people who think about doing it, but people who are doing it.

"Tony Bongiovi designed the Power Station, having worked at Media Sound for a long time with Bob Clearmountain as one of the assistants, and the whole place was set up for an engineer, or, more likely, an engineer/producer. It was ergonomically very functional and Tony had gone to extremes to get the main Studio A [live] room right, building multiple sides of unequal lengths that went into a pyramid shape and, after being dissatisfied with the initial sound, adjusting the distances between the vertical panelling boards of the walls. By the time I got in there, it was just a great‑sounding room — provided you used a little bit of sense, the drums sounded incredible.”