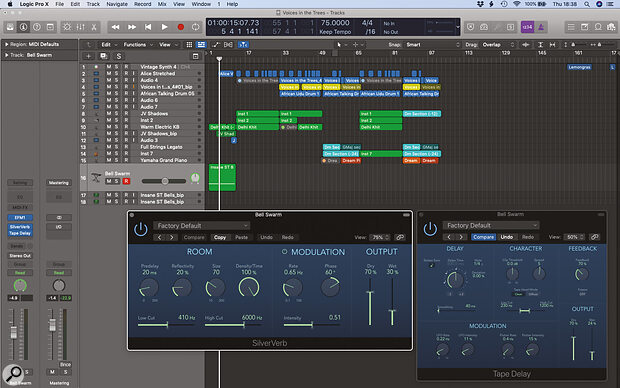 Putting a delay without repeats before the reverb is no different from using the pre‑delay parameter of most reverbs. But setting a delay (before or after the reverb) to produce a repeating echo, and using its onboard filters to roll off the lows (around 300Hz) and the highs (above 1.2kHz or so) achieves a very different effect. It makes the delay sound less obtrusive, and helps the repeats recede into the distance as they decay. Whether using the plug‑ins as inserts on a track or on a bus fed from an aux send, the wet/dry mix controls on each effect need adjusting so that you hear the desired contribution from each effect. When used as sends, one of the plug‑ins, usually the reverb, should be set fully wet.

Placing a compressor or saturator before the reverb can create a really dense‑sounding effect.

Sometimes, you want a really dense reverb sound, with the tail remaining high in level during the initial part of the reverb decay. One way to achieve this is to put a compressor before the reverb. A saturator or even an amp modeller can work too, while also warming/darkening the sound somewhat. Go too far, and you may hear obvious distortion in the reverb, but because a reverb tends to diffuse what passes through it, you can add more dirt than you might think before things get rough. 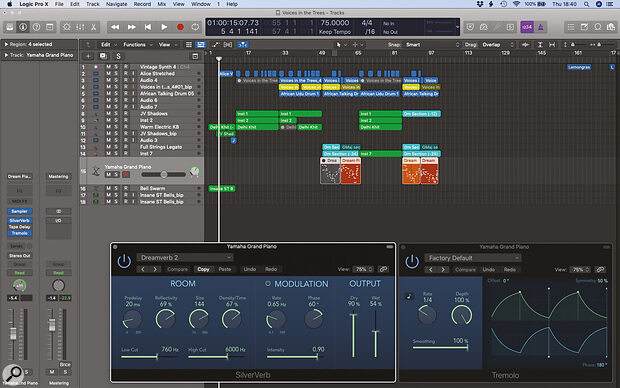 Using a tremolo to alternately autopan a piano sound and its reverb.Most of the time, people tend to use the stereo output from a reverb, with each channel panned hard left and right. That maximises the illusion of spaciousness and emulates the way reverb occurs in nature. But working this way can also dilute the sense of location for the original sound. A different approach, used by a number of classic producers and engineers including George Massenburg, is to use multiple mono reverbs and pan each one to the same left/right position as the source sound to which they relate. This preserves the position of the sound source and still sounds suitably wide once a few other tracks have been treated in the same way.

Another approach is to use a mono or narrow‑stereo reverb, such that the source is panned to one side and its reverb to the other. This can work well for creating a sense of distance and width. If you really want to mess with your listeners, though, put an autopanner on the dry sound and another, with identical settings but 180 degrees out of phase with the first, on the reverb; the source will always move in the opposite direction to the reverb! 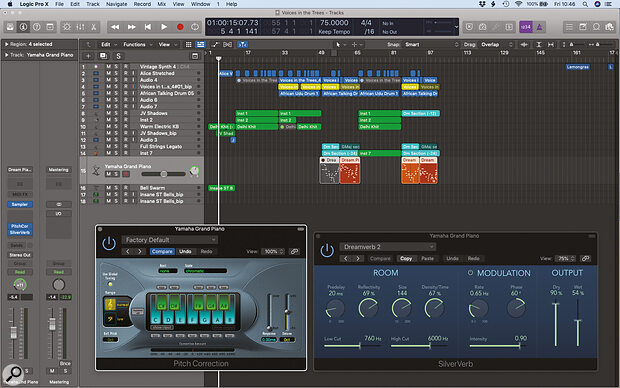 If placed on an aux channel before a reverb, a real‑time pitch‑corrrector can be used fairly assertively to create a lovely thickening effect.

You can make a vocal reverb really pop out of the mix by putting an automatic pitch‑correction plug‑in directly before the reverb. If you set the pitch‑corrector to act fairly assertively, the reverb tail will essentially be pitch‑quantised while the dry vocal remains natural. The slight pitch variations between the dry vocal and reverb tail make for a very rich sound, but without anything sounding too obviously processed.

I covered shimmer reverbs recently (https://sosm.ag/shimmer-reverb-effects) so I won’t go into detail here. But, essentially, a pitch‑shifter before the reverb adds some ‘octave‑up’ sound. Happily, while many pitch‑shifters can sound grainy and unnatural on dry sources, a fully wet reverb will knock most of those rough edges off.

You can make a vocal reverb really pop out of the mix by putting an automatic pitch‑correction plug‑in directly before the reverb.

You’re probably familiar with the fake double‑tracking effect that uses a stereo pitch‑shifter to add a couple of extra parts to a vocal or instrument, usually one part between three and six cents sharp on one side, and the other opposite and flat by the same amount. Well, instead of applying this effect to the main vocal, try putting the pitch‑shifter before a vocal reverb. Again, this will make the reverb sound more expansive. 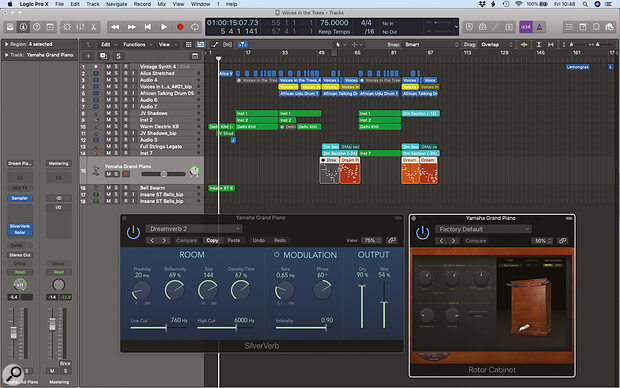 A rotary‑speaker effect used after a reverb can add an interesting sense of movement — it’s much more subtle than using it on the source you’re sending to the reverb.

When using reverb to create ambient guitar sounds, combining compression, delay and reverb is often a good way to go. Sometimes, though, putting a slow rotary speaker emulation after the reverb will add a nice, slow, cyclic wash to the sound. Using an emulation of a Roland Dimension‑D after a reverb can also add a useful texture without becoming too obvious; it can work extremely well on minimalist acoustic piano parts.

Reverb can be turned into a rhythmic element, simply by passing the reverb output through a tempo sync’ed chopper or a stepped filter plug‑in. When doing this, don’t be afraid to use really radical EQ to squeeze the sound into the audio band where it works best. 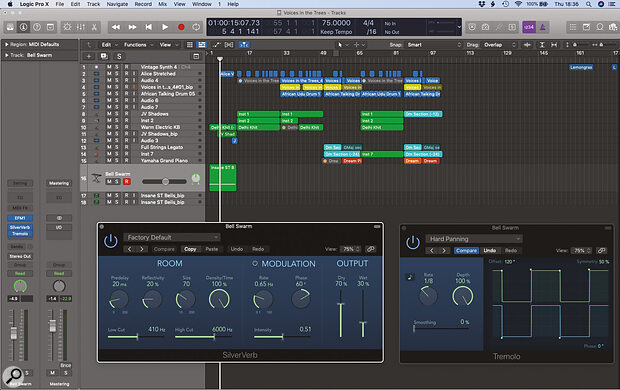 Feeding a long reverb into a tempo‑sync’ed chopper (ie. a square‑wave tremolo, as used here) can turn the reverb into an interesting rhythmic element.

One of the best‑known reverb effects is gated reverb. Originally this was created either using natural room reverb or a conventional synthetic reverb, then using a noise gate triggered via its side‑chain input to interrupt the reverb. Folklore attributes the effect to Hugh Padgham, who first used it in 1979 and later, more famously, on the classic Phil Collins single ‘In the Air Tonight’. The story is that it was discovered by accident when a drum overhead mic was fed into a heavily compressed and gated talkback mic channel by mistake. Earlier still, Tony Visconti had used gates on room mics for David Bowie’s voice: he set up several mics at different distances from Bowie, and each was processed by a gate with a different threshold. More gates opened up as the voice got louder, so the louder the voice the more ambience was added to the sound. 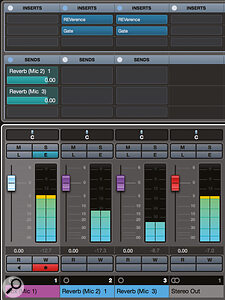 Using reverbs and gates to emulate the Tony Visconti ‘Hansa reverb’ technique famously used on David Bowie’s ‘Heroes’.Assuming you don’t have a huge stone drum room in your house, you can set up a gated snare effect by sending a drum overhead mic (or just the snare mic) through a reverb and then through a gate. The close snare mic signal also feeds the gate’s side‑chain, and you adjust the gate’s threshold so it opens on each snare hit. By setting a fast attack and fast release, with a hold time of maybe a quarter of a second, you should hear a short burst of reverb following each hit. If the signal is heavily compressed, by putting a low‑threshold, high‑ratio compressor before the reverb, the gated sound will sound big, dense and punchy. Many reverbs offer a synthesized gated reverb, but they don’t usually sound like the real thing in my experience; they’re actually a fairly coarse burst of early reflections. Using something like a plate or large room reverb followed by a gate that’s triggered via its side‑chain will get you much closer to the sound of the real thing.

You can also mimic the Visconti/Bowie effect in your DAW by setting up a few reverbs, each simulating a position further back in the room than the last, and sending the vocal to them all. Insert a gate before each reverb and set the gates’ thresholds so that the more ‘distant’ the reverb, the more signal is needed to push the gate open.

The Right Path: What To Put Where

Any effect can be combined with reverb but you should always consider what to put where in the signal chain. There aren’t always ‘right’ or ‘wrong’ answers here, but your choice will often have a significant impact on how the effect sounds.

With EQ or clean delays, you should hear little if any difference between having the reverb or the delay first in the chain, other than for the effect of any wet/dry mix controls. Where level‑dependent plug‑ins (eg. saturators or compressors) follow a reverb, they’ll respond to the extended envelope created by the reverb, but if you swap the order then the non‑linear processor will respond to the shorter envelope of the original source.

The difference is more obvious when the second effect incorporates time or pitch modulation. For example, put a flanger before a reverb and the blurring effects of the reverb will diffuse the sweeping modulation; you’ll hear a reverb with a modified texture but without the whooshing sweep of the flanger. Put the flanger after the reverb, and the whole reverb tail will be flanged. The same is true of chorus effects, and putting a chorus or flanger plug‑in before a reverb can often help you achieve a more interestingly textured reverb sound.