To kick things off, here's British engineer and producer Ian Button, known for his work as guitarist with Death In Vegas (including their collaborations with Iggy Pop, Liam Gallagher, Paul Weller and so on), Arthur Baker, Dot Allison, Brandon Block and more. In recent years Ian has turned his hand to production, engineering and mixing, and has recently worked on tracks for Mary Epworth and Go Kart Mozart. Like many well-known engineers, he also does a lot of work with up-and-coming bands who might not have the budget to spend weeks in the studio, and so it is with Lucy's Diary (Blang Records)... 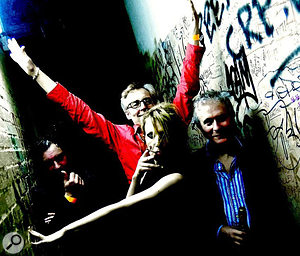 Tip 1: Know your artist and style of music

I knew Lucy and JJ Crash from the anti-folk scene, where Lucy had been performing on her own and in duos. They had talked for a while about doing a ‘band’ type album of Lucy’s songs for Blang, the label JJ co-runs. I got involved playing drums and producing on a few tracks, and then mixing the whole album.

We’re now working on tracks for the second album. An initial session from last year produced the basic tracks for four songs, with drums and bass plus guide guitar and vocal tracks from Lucy. Since then I’ve done a little work on the tracks at home, building the drum sound (some subtle triggering of kick and snare samples using Aptrigga), adding percussion, and on one track some layers of Indian harmonium to replace the guide guitars.

The general plan for some of these tracks is to move away from the basic rock guitar approach we had before, and try for a different approach to instrumentation and arrangements. Lucy’s songs are interesting in that they don’t always follow regular verse and line lengths or standard verse/chorus patterns, and as the ‘producer’ I’m keen to keep that interest there. It involves the band learning the songs by following the vocals rather than counting bars, and that’s how most of these songs are developing.

Tip 2: Research your studio, and take the best gear you can

We are in Kafri Studios, a very friendly and affordable rehearsal room near Hoxton, for a day of overdubs of vocals, guitars and so on, with the aim of getting this first set of songs ready to mix. 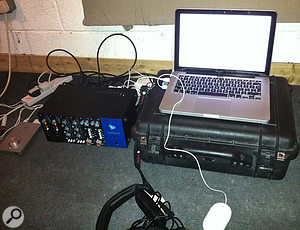 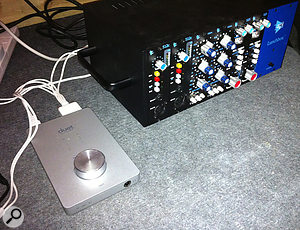 Equipment-wise, I’ve brought my Macbook Pro, a bag of mics, leads and headphones, my Apogee Duet interface with two ins and outs (we’re not going to be recording more than two channels at once), and my API Lunchbox -- basically a miniature outboard rack with two channels of high-end mic/line preamps, EQ and compression, which all the overdubs will pass through before they get recorded into Logic.

Tip 3: Plan your recording session, and be ready to change it!

I’m keen to get Lucy’s vocals on the tracks earlier rather than later in the day. This is partly because the place is quieter then; although spill from the other rooms is never usually a huge problem, it’s in the evenings when you’re most likely to end up surrounded by metal bands, and I’m hoping we’ll be on to loud guitars ourselves by then. I also want the main vocals to shape the other instrumentation to some extent: guitars or other melodic parts can be inspired by Lucy’s delivery and phrasing. We’ll probably end up putting fewer instruments on if the vocals are done first.

However, just after we arrive we hear from Lucy that she’s running late -- a broken-down bus followed by a broken-down taxi have both delayed her journey, so we decide to work on some guitar overdubs first. 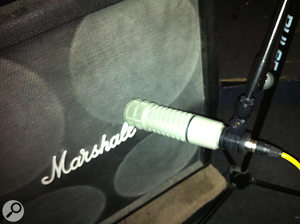 I set up an Electro-Voice RE20 in front of one of the studio guitar cabs and we get an amp sound that can build from fairly clean to crunchy to power-chord as JJ plays harder. The mic signal is going through the preamp, EQ and compressor in the Lunchbox. The input gain of the API 512c preamp is set to show a level of about +3dB on LED VU meter (the RE20 is a dynamic mic and needs quite a boost from the preamp), the 550A EQ is switched in but set flat, and the 525 compressor is set to compress rather than limit, with the fastest 0.1ms release setting. I then usually adjust the input level and ceiling controls until I see no more than about 4dB of gain reduction, and use the output control to set the record level into Logic. That’s pretty much how I leave the API gear set for the whole day – all the guitar and vocal overdubs are tracked this way, with just minor level adjustments to achieve subtle gain reduction as the performances and parts change.

Tip 5: Leave your sound processing until after recording

We record one track of miked guitar on one song, ‘Am I Strong’, then move on to other parts and overdubs, this time plugging straight into the Lunchbox and using Logic’s Amp Designer and Pedalboard plug-ins to build the sounds. We have been using headphones, but we can monitor through the PA speakers in the room now, as there are no mics open.

JJ is not an amp purist and neither am I, so we’re happy to have the flexibility of getting guitar sounds using software simulation. We record a double-tracked punky stabs part, and a cleaner, more reverb-y tremolo ringing chord part on this first song. I’ll be able to tweak these and refine the sound at a later stage in the production process.

Tip 6: Use mics that work with the tone and style of the vocalist

By now Lucy is here, and we set up for vocals. I have several mics that I could use: the RE20 would be great, and I also have some very inexpensive Gauge ECM87s which are excellent. Today I’ve also brought an AKG C414 -- an old one (no fancy LEDs) that I got from eBay a year or so ago. It’s set to cardioid, with no pad or bass roll-off, and I set up a pop shield to stop plosives and to help keep Lucy the right distance from the mic. I’m confident the 414 will capture the high-end breathiness that’s a crucial part of Lucy’s voice. 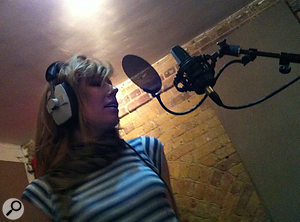 The Lunchbox settings are as above – it’s such lovely equipment to use, and easy once you have the confidence to almost set it and forget it. I’m reluctant to do too much EQing in this environment where I don’t really get a clear listen to everything, but I can trust the preamp and compressor settings to give me very useable, not over-processed results.

Once the levels are set, Lucy records a couple of complete takes of the song to warm up, monitoring with a little reverb, and when we have a good take, we double- and triple-track it throughout. We love the sound of tracked vocals, and although we may not ultimately use all three takes all the time, we make sure we have them recorded. We’re also not slavish about getting the takes super-tight. Lucy’s good at singing with herself, but little discrepancies in timing or pitch are good. They might be ironed out in editing, or just left.

And that’s pretty much the process for the rest of the day. We look at three of the tracks we’d already started, recording lead vocals and guitars as we go. Between us (me, JJ, Lucy and Mike) we decide on guitar sounds, vocal takes and ideas for parts. There are plenty of smoke and drink breaks and it’s a very easy-going session. Lucy introduces us to her new friend and studio neighbour Sireeta, who she’s just borrowed a light from outside, and Sireeta joins us to watch part of the recording. It all turns into a rather nice social occasion! 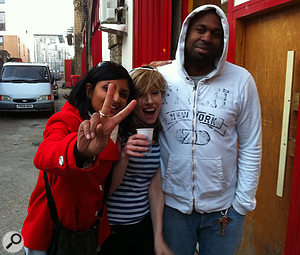 As it’s getting close to eight o'clock we decide we decide to have a go at one more vocal, this one on a cover Lucy wants to do: ‘Girl’ by the Beatles.

Tip 8: Don't be afraid to try out new ideas if you have time

For this track, I had the idea of downloading the MIDI/ringtone version of the song as a template. I’ve already changed the (awful) General MIDI instruments to some nicer sounds and we record three takes of Lucy’s vocal (she knows it off by heart, first take). The next time we get together we’ll start to remove and replace the guide MIDI parts with our own -- when we’ve learned the chords...

Next day I check what we’ve got at home, tweak the EQ a little on the vocals (a little 200-400 Hz needs scooping out -- maybe I should have done that on the 550A) and start working on some rough mixes to send to everyone. 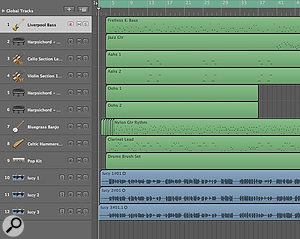 This way of working is the one I tend to use the most with bands and artists I record. You can read an earlier overview of my recording methods and general production outlook here, while there's more about Lucy's Diary here. You can listen to a short ‘teaser’ mix of the LD tracks we’ve been working on – you’ll hear them fade from the raw, guide versions into the updated versions from this week’s session.

Recording on a budget: summary
• Have a recording plan that works for the artist and the music, then be ready to change it on the day.
• Research your studio, check soundproofing and gear, make sure the local death metal band isn't rehearsing!
• Remember the signal path into your recording rig is the most important. Use the best gear you can get your hands on.
• Be cautious when applying compression and EQ, and don't over-process at the recording stage.