Thanks for everyone's help on this.

I'll update on how it went. Thanks for the offer of equipment, but I'll see how I get on with my stuff

Sorry about the double post. Not sure what happened there.

I've just had confirmation I'm doing the rehearsal on Sat at 1.30.

You may not have the equipment for a true stereo recording. But I'd suggest that even an 'untrue' one, made with an un-matched pair, will sound better than mono.

You ask: "Would any of my setup sound better than a handheld recorder like the Zoom models?" Have you GOT a Zoom? I'd certainly consider stationing someone to hold it in 'the best seat in the house'. Maybe a pole? I've made some excellent recordings with the likes of a Zoom on a 'Deadhead' pole. 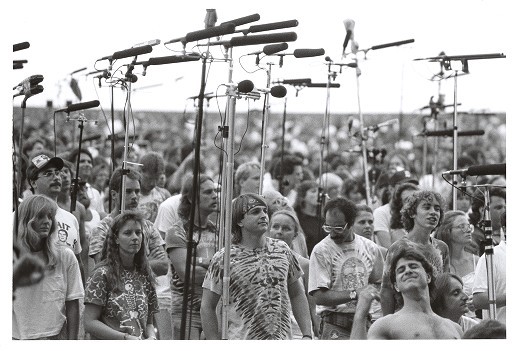 You don't have to write songs. The world doesn't want you to write songs. It would probably prefer it if you didn't. So write songs if you want to. Otherwise, dont bore us with beefing about it. Go fishing instead.
Top

Exalted Wombat wrote:You may not have the equipment for a true stereo recording. But I'd suggest that even an 'untrue' one, made with an un-matched pair, will sound better than mono.

You ask: "Would any of my setup sound better than a handheld recorder like the Zoom models?" Have you GOT a Zoom? I'd certainly consider stationing someone to hold it in 'the best seat in the house'. Maybe a pole? I've made some excellent recordings with the likes of a Zoom on a 'Deadhead' pole.

Agree with both comments.

The very first time I used my Zoom many years ago was at a very small venue where the manager would not allow any mic stands or cables. In any case I was preoccupied with operating two video cameras so I had a friend who was sitting in the best seat in the house ( we had arrived early) to hold the Zoom.

The only proviso might be to train the assistant to handle the recorder carefully to avoid handling noise. Alternatively, the assistant could place the recorder on a short, lightweight mic stand directly in front, in between the knees if needed. Since then I've always include a shock mount to isolate the Zoom mics from floor vibrations that may transmit up the mic stand.

I think i confused people there. The people i am recordinghave prviously used a hand held device to record, so was just asking if my equipment would sound better.

Another quick question. I've decided to go for ORTF for the main pair with the 2 Rodes left and right. Possibly my SE X1A as the centre mic filling in the middle, but I have a few more questions.

1. For the centre ORTFs, is it ESSENTIAL that they are exactly 17cm and 110 degrees, as I will probably be doing it by sight, and my stereo bar isn't that adjustable?
2. Should the ORTF go quite near the orchestra or should they be further away, or is the only difference how much of the room they pick up?
3. Does the lack of bass of using cardiods at distance affect the sound to a large degree.

Word of warning - ORTF requires your microphones to be matched...you’re trying to use different models which have different responses which may give you some unexpected results....didn’t Hugh suggest a L-C-R which gets round that?

By definition ORTF uses that spacing and angle...or it isn’t ORTF ;)

Not really sure what you’re getting at wrt filling in the middle? There shouldn’t really be one.

Don’t be overly concerned about a lack of bass. This a standard bear coincident array that’s used for this kind of thing a lot.

Cheers Aural, but the ortf mics are the same model. They're not matched, but the same model so there shouldn't be too much of a difference between them. Plus it's not a critical recording as it's only recording their rehearsal. The mid mic is there for what Hugh suggested and to also fill in the middle if I decide to go with the ortf instead of the l-c-r as I know you can lose a little of the middle with ortf.

As I say, I'm doing this both for fun and to learn via mistakes :tongue: I know it's not going to sound as good as professional mics with different polar responses, but looking forward to having a good.

Thanks for everyone's help though, I'm a lot closer to getting a good sound than I was a fortnight ago. :thumbup:
Cheers

Have you bought additional mics since you started this thread?

If not, I fear you may be misunderstanding. The Rode NT1 and NT1a are different mics with different characteristics. ORTF - or any of the 'pair' stereo recording systems - require, ideally, a matched pair or at least two mics of the same make & model within the same version edition.

Hugh suggested a spaced pair of the Rodes as spaced pairs aren't so critical about the same characteristics. 'Spaced' in this context means the order of a few feet apart. That's why he also suggested a middle mic to fill the hole in the middle if necessary.

If you do have two mics of the same make/model then setting up in ORTF is made much easier if you make up a template of the required dimensions and angles. I have one in my mic box which I can deploy if needed - although my stereo-bar has specific markings for ORTF.

jimh76 wrote:
My mics are'nt top of the range, so I've listed them below:

I suspect the ORTF pair are the Red5 RV4s.

The Rødes are the L and R of the LRC set.

Mike Stranks wrote:Hugh suggested a spaced pair of the Rodes as spaced pairs aren't so critical about the same characteristics. 'Spaced' in this context means the order of a few feet apart. That's why he also suggested a middle mic to fill the hole in the middle if necessary.

If you're referring to where Hugh said:

Hugh Robjohns wrote: ... I'd go down the spaced mics route -- Bob Fine stylee... :-) (check out Mercury Living Presence if the name means nothing!) .

The lack of matching between mics won't be so noticeable if they are widely spaced and capturing different parts of the orchestra anyway. So I'd place one beside the conductor, one half-way between the conductor and the back desk on the left, and another half-way to the back desk on the right. Pan the outside mics fully left/right, and the central one.. er... centrally!

Then you may want to read up on Bob Fine and the Mercury Living Presence recordings.

As Hugh explains, the spacings involved are way more than the few feet or so more commonly in spaced pairs. Positionally, think more in terms of the centre mic bisecting the image and each of the outer mics again bisecting their respective left and right halves of the image. (Of course the exact spacings will probably be fiddled with and adjusted to account for specific circumstances.) And they don't work as a spaced pair with an added centre fill, nor as some kind of bastardised Decca Tree type setup. They need to be considered as a 3-mic array in their own right that all works together as a single system. It's particularly worth learning what the centre mic contributes and how it's mixed.

And with the OP's mic selection I'd probably try Hugh's suggestion first (assuming that there are some reasonably tall, stable stands available).

I suspect the ORTF pair are the Red5 RV4s.

The Rødes are the L and R of the LRC set.

I've tried my stereo bar and it won't do an ortf, so i'll try the x/y for the middle, the rodes for the far left and far right and add in the SE X1A as the centre mic. This way, i have 2 separate ways of recording and i can see which sounds best. The simple x/y stereo Red5s, or the L-C-R using the 2 rodes as far eft and right and the se mic as the centre.

As i say, i'm really looking forward to it and it's a freebie, so if it doesn't sound studio recording, i'm not too worried.

Ah, apologies - I read it as ORTF with the Rodes.

What's your stereo bar? I'm surprised you can't fashion something in ORTF even with one of the generic style bars....or is it that you're concerned about the mics not being on the same horizontal axis?

I quite often use ORTF with outriggers at the front (often with another pair at the rear) as an archive rig, though it depends on lots of things what I choose.

Be aware, though, that the spacing of the front outriggers may not be the same as that required for the Bob Fine method described by Hugh then in more detail by forumuser840717 (who happens to rather more of an expert at orchestral recording than most). It's worth having a read up as they've suggested, as it's perhaps not as simple as it first seems.

As you say, though, it's all part of the learning experience....so try it, and if it doesn't work, try something else.

jimh76 wrote: I've decided to go for ORTF for the main pair with the 2 Rodes left and right...

Ah! Both Aural Reject and I misunderstood what you meant. Apologies.

I hadn't understood that you were going to use an ORTF pair AND spaced mics.

... and to others... Yes, I put my hands up that I hadn't read the article(s) cited on particular spaced techniques. I was just trying to make the point that 'spaced' means feet and not inches...