Print view
For current or would-be users of Apple Mac computers, with answers to many FAQs.

dbfs wrote:I really have to take this opportunity to warn people away from Apple.
They have big announcements, fill the internet with hype and just look at the state of the machine they sold. It really is a disgrace.

I totally get your frustration, it's really annoying to have to deal with issues like the ones you're faced with at any time, let alone with a brand new device. But there seems to be quite a few of them not doing the same so it doesn't seem a totally fair conclusion.

For example, I've had multiple Apple devices over the years and I haven't had a single hardware or software issue with any of them, I seriously think I could even count the amount of crashes that required a restart on one hand, and that's over many years doing lots of work with them every day. Despite that, it would be unreasonable of me to come here and thoroughly recommend Apple and say they've never made a bad bit of hardware or software just because I've never been bitten.

Not an attack, just my thoughts. :thumbup:

I know you're frustrated, but please don't post the same thing multiple times on all the Mac threads - if you stick to one, we'll be able to make sense of the thread and hopefully find a solution.

Well, the kiddo's got the order for the M1, let's hope he fares better than dbfs when the laptop gets at his place.

I suspect (and, indeed, hope fervently) that the odds are in his, and my, favour :blush:

Two shiny new MacBooks arrived at around 10:45 this morning, both have gone through the setup process without a hitch. Mrs S thinks her Rose Gold MacBook Air is "very pretty" :D

I think the screen, keyboard and touch pad are excellent, boot up times are not much different to my SSD equipped 2012 MBP but overall is seems more sprightly and iCloud has worked it's magic so just the other stuff to transfer from the various archives. Every time I get a new ssd or, in this case computer I am full of good intentions about the lean mean machine It's going to be then it ends up with everything including the kitchen sink on there :headbang:

Hi - newbie on here, normally hang around The Gear Page :-/

Just about to upgrade my 2013 iMac 21.5 inch with 8gb ram, and my - ahem - Financial Advisor is asking me whether the M1 Mac Mini basic model will be OK.

I record for fun, using GarageBand (but will upgrade to Logic when I get a capable Mac) but also need to do a regular film of about 20 minutes each week. I'm thinking I should go for 16 gb, but just upgrade the storage with an external SSD which should perform as well but be about a quarter of the cost of Apple internal storage.

Anyone using a new M1 with just 8gb, for more intensive recording/movies, and if so, how does it do?

I went for 16GB and external storage myself.

It is pretty easy to go above 8GB of used ram.

Any more reports on how the new M1's are performing in the wild?

BobTheDog wrote:I went for 16GB and external storage myself.

It is pretty easy to go above 8GB of used ram.

More than that - you can't upgrade the RAM in a new Mac under any circumstances, you'll always be stuck with what you had at the beginning. So I would also advise you go for as much RAM as you can, 16GB in this case. External storage is much easier. I've got 3TB's worth of SSDs hanging off my machine using USB 3.1 gen 2 (or whatever they're calling it nowadays) and the performance is way more than adequate.

I would agree with this if buying a music recording specific machine (I wasn't) but for a general purpose laptop I considered the SSD the more important upgrade. If/when I eventually replace my ageing Mac Pro with an M1 powered Mac mini (which is where my thinking is at present) I would go for the smallest SSD and add external drives but doing so on the MacBook is much less convenient.

I can always find out how close I'll be to needing more RAM for my recording activities by running a project or two on the MBP. I suspect I won't need more than 8GB often enough to justify the extra cost as I use Reaper and don't use any VSTi's or many plug ins. Should it prove that I do need 16GB then that is where the extra cash will go.

For the moment my old Mac Pro 3.1 gets the job done adequately so hopefully I don't have to make a decision for awhile.

The thing is even with a laptop these drives are so small and light now you can just have one hanging off the laptop with no problem, also you can just install all your "normal" stuff on the small internal drive so most of the time you don't even need the tiny drive attached.

Here is a 1TB t5 disk, much smaller than a magic mouse: 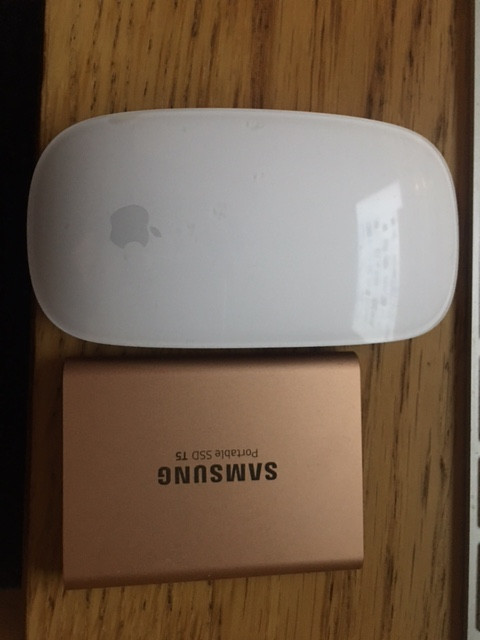 I will say that my perspective is coloured by my use of desktop machines. If you're using a laptop then I guess you really don't want to have to carry around an essential external SSD, whatever the size.