Record it at home, play it back at the gig

The OP wants to play a DrumKat live.

OneWorld wrote:That is exactly it, too many variables to be factored in and people saying "Well I've never had a problem" doesn't fix a thing.

Maybe not, but it needs to be said. People often blame the technology; the easy target. If others can make it work it's not the technology per se.

merlyn wrote:One way of looking at it is that home users are beta testing Windows 10 for the actual version -- the enterprise version.

It's been many moons now since Microsoft made money with Windows. They have long moved on and they keep making Windows because, well, it's good marketing I guess.

The secret to having a reliable computer is to treat it as a single function device. If you are using a laptop live then it should never be set up as a general computer for web browsing or any other non-music tasks.

I don't use a laptop for live performance but both my recording laptops have networking disabled whenever they are recording a gig. The only application running is Reaper. My Windows 10 laptop has updates deferred permanently (it runs the Pro version of Windows 10) so it shouldn't go off and do anything else while the recording is happening.

James Perrett wrote:The secret to having a reliable computer is to treat it as a single function device. If you are using a laptop live then it should never be set up as a general computer for web browsing or any other non-music tasks.

And yet I can tell you that my humble PC World PC lappy does not conform to this secret! And neither have any of my performing/recording laptops for as long as I've been using them. And yet they all work just fine. I neither keep them off the 'net, nor switch off any functions.

If there's any secret I believe it to be about being sensible and tidy, not installing any old stuff that takes you fancy for 20 minutes, and regularly making a point of cleaning up, updating., re-checking, backing up... The stuff that most people seem reluctant to do - and then call me when it goes wrong! :lolno:

The biggest problem I see with most computer-based systems being used live is that there is too much assembly and disassembly involved every time.

One of the bands I play with use a computer-based backing for synths, and sound effects. The laptop that runs lives live permanently in 3U rack case along with the audio/MIDI interface, PSUs DI boxes and patch bay. All the connections to the computer are fixed permanently in place and never touched. Apart from a single mains lead for the whole rack all the other connections to the outside world for audio and MIDI are made with XLRs.

The laptop sits on the top shelf of the rack case (it's one where the top as well as the ends come off) in a cut out made of flight case foam and held in place with effects pedal velcro. It never moves. All the cables joining the various devices in the case are held in place with cable ties. They can't move either. In 2 years of gigging this set up the only problems have been caused by dodgy leads from the PA system. I know that it's not a problem with my equipment so if the PA isn't getting the signal they were expecting the first thing I do is to replace their XLR leads with some of mine, and guess what? It works.

It takes less than 5 minutes to set this system up and get it running.

BJG145 wrote:...testing at home...? Worked great. At the gig...? No way. This was just a jam night so you get about five minutes to set up. I thought there was only about a 50% chance of getting it working anyway, but that was optimistic.

So I need to find an inexpensive MIDI sound module with a variety of decent sounds, because I'm never using Windows again. It's let me down several times too often.

That's all down to setup, and/or the kit you're running, as we run large shows from nothing more than a laptop and it's rare that we have any issues. Some of those shows are 35-40 track playbacks, with effects on the busses, so it's not as though the laptop is strolling along at 20%.

Never had a problem. Doing my solo/duo thing. I use Showplay and a Roland xv5050 sound module. Been using that set up for years.

I'm half-expecting another storm of angry protest for reviving this thread, but I don't care. Each to their own; it's a question of finding what works for you...

...and it's an XV2020 I just picked up on Facebook Marketplace. Finally all the MIDI controllers I've been accumulating make sense. I can plug them in (even USB ones like the Artiphon, via a Kenton box), switch on - and it just works, first time, every time. It's a 'Road to Damascus' moment.

So that was before Storm Ciara. 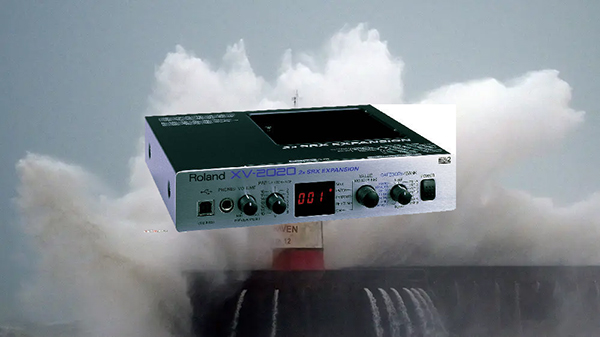 Two things about that.

1) I didn't remember that hail hurt so much? Either the hailing is increasing or my pain threshold is dropping. Today it was like, ow! That hurt. Even through my jeans.

2) This evening was the first outing for the XV2020 and the KX5. I thought nothing could go wrong. Tested it just before I left. "Making Plans for Nigel" would be triumphant. Could I get a note out of it? Could I heck.

I'm reluctantly coming to the conclusion that the gear is not the problem. I'm the problem. I just don't go into the operational details. Turns out there's a big rotary dial to select the MIDI input channel. Could that have been it...? Possibly.

BigRedX wrote:The biggest problem I see with most computer-based systems being used live is that there is too much assembly and disassembly involved every time.

Particularly WRT MIDI devices on Windows not enumerating in the same order on every boot, and lots of duff hardware / drivers making it impossible to just sleep the machine.

Aside from that, my experience mirrors The Elf (though on possibly better hardware than PC World jobs).

Which is not to say I haven't had my fair share of issues using a laptop to gig, but in every case the problem turned out to be of a deterministic nature and could be solved or otherwise mitigated.

CS70 wrote:
It's been many moons now since Microsoft made money with Windows. They have long moved on and they keep making Windows because, well, it's good marketing I guess.

Closer to the truth to say it's no longer considered a growth centre for the business, but it's certainly still a profit making venture.

I'm sorry the set wasn't good for you, but this is better in the long run.

For however many other musicians tell you a laptop is fine and nobody cares..THEY CARE.

And so should YOU.

It's just weak to get on stage with a laptop. It's like getting on stage to sing and then being completely obvious about cuing up a backing track to lip sync too.

In this day and age, EVERYBODY has music software, and most have put together techno jams to see what happens. Invariably they go: "That was easy! Sounds as good as any of those other guys, so it's true you don't need any talent, just get some software and let the computer do it for you."

It brings down EVERYBODY.....learn how to use some hardware Joe-six pack couldn't figure out in 30 seconds and put some SKILLS on display when you take the stage.

And this goes for EVERYONE, I saw Kraftwork in....2012? And it was just three of them standing at a table, each with a laptop.

I watched for three or four songs and gave up. They were just playing their records and allowing us to pay to watch them hit play on Itunes.

I asked for my money back, and I got it.

Other opinions are also available... ;)