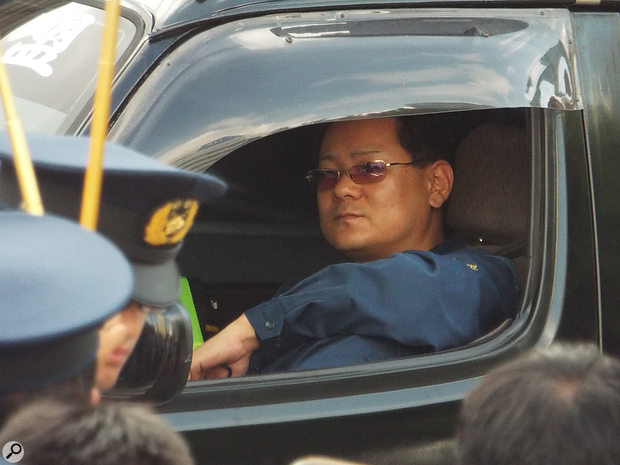 “Unfortunately his latest mix does not translate well to the car stereo. Has he got any thumbs left?”

The way composers are treated by some clients is just criminal.

A few years ago, one of Japan’s biggest organised crime groups, Yamaguchi-gumi, launched a web site to highlight their strong anti-drugs message, and trumpet how the gang often work to help their local community. Included in the video footage on the site are shots of syndicate members visiting shrines, making rice cakes and helping with disaster relief work following the Kobe earthquake in 1993 and the Tohoku tsunami of 2011. And, as you might expect with all corporate PR endeavours, there is a jingle. ‘Ninkyo Hitosuji’ sounds a bit like a folk song fighting to maintain poise and dignity in the face of a General MIDI onslaught from a mid-’90s library-music album. The crooning vocal wobbles along, with lofty lyrics hinting at honour, chivalry and courage.

Perhaps the clients came along to the studio with their girlfriends while the vocal was recorded. Perhaps they all stared at the singer through the control-room glass as they sipped tea, played record producer and told the engineer to make it sound more ‘intense’. Perhaps if the singer didn’t do it well he might expect to have his thumbs cut off. That would certainly explain the wobble in his voice. If you stumbled across this web site by chance you’d be forgiven for not thinking there was anything Yakuza going on here at all. In fact the greatest crime on display is the crappy sampled shakuhachi, which ditches all pretence of realism and seems happy to stretch the limits of instrumental authenticity with gay abandon.

We’ve all had clients that could be described as ‘tricky’. I was recently asked to pitch an idea for the title music for a high-profile TV show. The stakes were high. It was a big-money gig and, as always, many careers were riding on it. As it happened, the theme tune needed to sound quite a bit like a very well-known existing piece of music that they would have liked to use but weren’t allowed to. But my track shouldn’t sound too much like it. In fact they’d prefer it if it didn’t sound like it at all. Just as long as viewers would feel, within the first six seconds, that my tune was as familiar and beloved to them as the original song that they’d been hearing for years.

I’d rather they just cut my thumbs off, if I’m being honest.

Frustration was compounded by finding out that at least eight other established media composers (that I knew about) and at least three decent-sized music agencies had also been given the same brief, on the same day, for the same show. Over a drink shortly afterwards, a few of my fellow media composers and I were holding our heads in our hands bemoaning the futility of it all. We tried to guess how many other people had been asked to pitch, and concluded that there is no way the producers could ever possibly hope to pick the ‘best’ track for the show.

Each minute we spent on creating ideas and pitches for it was about as useful as wandering the streets of London looking in bins for discarded lottery scratch cards in the hope that they might contain an overlooked fortune. In other words, we were all equally invested in the outcome — which was not at all. We even had the idea that we could slash the odds by sending each other our demos and submitting them all to the production anonymously, then sharing the profits in the unlikely circumstance that one got picked. We’re all going to lose, so why not salvage a tiny percentage win as part of a group? A theme tune with 20 writers is still a theme tune. There’s safety, honour and chivalry in numbers. Almost like a union. Or a family. Or a syndicate.

All we need now is a web site. And a theme tune.