Pretentious hairy people have influenced the world of art in more ways than you might expect. 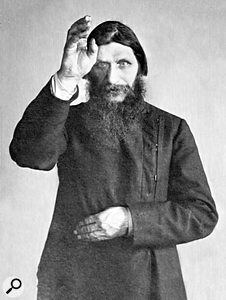 “And the number of people who emerge with any credit from my life story is...”Grigori Rasputin was a self-proclaimed mystic, healer and holy man who, in 1906, somehow managed to befriend the family of Tsar Nicholas II of Imperial Russia. Having impressed the Tsar’s wife by apparently healing their haemophiliac son he was gradually allowed access to the highest corridors of power, and despite looking like the bass player in a death metal band, this mysterious guru, prophet and pseudo-monk eventually came to exercise massive and unprecedented influence over the Tsar’s entire family — and, as such, the whole of the Russian Romanov Empire — for several years. He was notorious for drinking, womanising and waving his 13-inch penis around in restaurants (it’s pickled in a jar in a St Petersburg museum, if you are curious), and it wasn’t long before a gang of disgruntled Russian noblemen poisoned, stabbed, shot and eventually drowned the infamously hard-to-kill Siberian. It didn’t take Hollywood long to smell a hit, either, and Rasputin And The Empress was released in 1932 by MGM.

One of the princes involved in Rasputin’s murder saw the movie, took issue with the artistic licence that had been taken with the story and successfully sued the film-makers over damage to his (and his wife’s) reputation. All of which led to the now ubiquitous disclaimer you see at the end of all TV and movie productions made from that day to this: “This is a work of fiction. Any similarity to actual persons, living or dead, or actual events, is purely coincidental.”

It wasn’t the first time a massive cock has had an indirect but lasting influence on showbiz and it certainly won’t be the last.

The subject of similarity is an ongoing and tricky one for composers and writers. Everyone knows that where there’s a hit, there’s a writ; I’m not sure how many writers have now claimed ownership of ‘Uptown Funk’ but it’s certainly in double figures. For the media writer, pretty much every job will come with a list of other existing musical works which will variously be presented to you using phrases such as “things to inspire you”, “tracks our Executive Producer’s son quite likes” or “make it sound as close to this as you can without getting us sued”.

All music is informed by that which came before it, and there are lots of lawyers driving around in nice cars paid for by arguing about where homage stops and infringement starts. It’s a situation that reflects both a lack of confidence on behalf of those in charge of productions, who aren’t willing to put their faith in innovation, and the competitive nature of the game, which keeps composers perpetually terrified that there will always be somebody somewhere prepared to turn in a composition even closer to the temp track, for less money.

If you want my advice, the best way to stop the race to the bottom of the ‘being treated well at work’ pile is to join BASCA. The British Academy of Songwriters, Composers and Authors is a group of professional and semi-professional composers and writers who campaign on behalf of, support and celebrate British music creation. We aren’t a union or a club, but if you want proof that we are all in the same boat and you want to meet and socialise with your peers and competitors, it’s absolutely the place to be.

There are all sorts of membership benefits — workshops with big names in the industry on all sides of the production landscape, various discounts, invites to swanky award ceremonies — but best of all is the sense of solidarity. Meeting other composers makes you like them more and be less afraid of them. It makes you want to be inspired by them and collaborate with them. Membership starts from £20 a year and I’d encourage you all to join with us to try to make the composing world as inclusive, fair and friendly a place as it can be.

Jeez, listen to me. I sound like some sort of Communist.