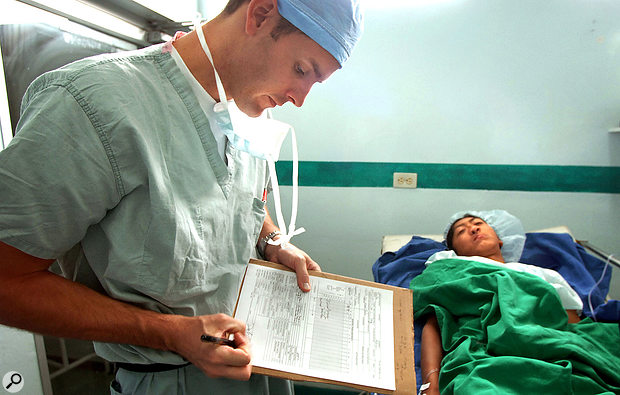 “So... it says here that you need plastic surgery in order to convince Logic to load your cor anglais samples. Is that right?”

Is it really still OK for our livelihoods to depend on a small piece of plastic?

In May 2004, I happened to find myself in New York the same weekend that Shrek 2 opened. Having grown up in rural England, where our Internet is in black and white and we still only have one type of coffee, I remember the buzz of excitement that went with seeing a movie in America on its opening night. Walking back to my hotel afterwards, I had to step over a man sitting on a blanket on the sidewalk selling counterfeit DVDs, handbags and sunglasses (I’ve never understood this most familiar, and yet peculiar combination of bootleg consumer goods). Pausing to have a look at the quality of his wares, I spotted he was selling Shrek 2. When I expressed my surprise at seeing a knock-off DVD of a movie that had only opened that same day, he swiftly produced a portable DVD player and screen, popped the disc in, and played it to me. It even had a director’s commentary on it. Not by the real film-makers, of course; it was a couple of Russian blokes chatting in broken English over the wobbly back-row-of-the-cinema footage, pretending they were involved in the production and swapping clearly made-up stories of what a cool guy Mike Myers was to work with.

The Keys To The Universe

I’m not sure about you, but one of the first things I’d grab if my house was on fire would be my iLok, my Mac, my cat and (time permitting) the majority of the members of my immediate family. In my world my studio computers never really die, they just get moved upstairs and replaced, meaning that at any one time I have as many as five different studio Macs I could use to hit the deadline and get the job done. But thanks to my friend on his blanket two blocks from Times Square and his Roy Bon (sic) sunglasses, I’d be seriously inconvenienced if I lost my Syncrosoft key, and I’d be royally screwed if I lost my iLok.

Copy protection is one of those odd things that massively inconveniences the genuine customer and simultaneously doesn’t bother the pirate in the least. And yet the reality is we live in a world where irreplaceable, tiny, fragile, plastic USB sticks are the gatekeepers to your being employed or not. It’s a silly situation, no doubt — but there is, at least, a bit of light at the end of the tunnel. And it comes in the shape of a telephone that allows you to animate and match your facial expressions onto the emoji of a cartoon poo in real time. Think different indeed.

The release of the iPhone X marks the world debut of industrial-quality 3D facial recognition, and whilst I couldn’t care less about using it to authorise the purchase of a flat white (whatever that is) at Starbucks, I desperately want it to migrate to Apple’s desktop computers and be rapturously adopted by third-party audio plug-in developers as a matter of extreme urgency. It took more than five years for Siri to migrate from the headline-grabbing billion-dollar prestige of the iPhone 4s to the smelly disabled parking space of Apple’s OS 10.12. But I’m hoping Face ID’s journey will be faster and grabbed with both hands by anyone who makes software. I want my Mac to know that it really is me trying to make a living slumped in front of it, and I’d like all the bags-under-the-eyes-forgiving, stubble-ignoring facial recognition software to tell all my plug-ins that it’s really OK to let this pale, shattered, frustrated lump hear those viola samples he paid good money for without redress to an unspeakably precious, awkward piece of plastic sticking out the back of a USB hole somewhere.

I’ve spent more than enough hours of my life gawping at my computer. It seems only fair that it recognises my presence in the relationship.