When it comes to telling composers what to do, job titles are no barrier to meddling. 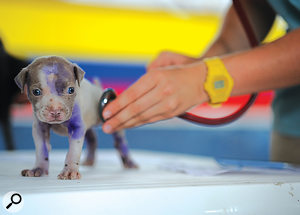 "What's that, Smudger? You think it needs an alpenhorn solo? Well, Daddy agrees.”

"Hi Paul! Thanks for the latest demo!”

"Overall, really positive. The Series Producer, the Executive Producer and Director all really loved it. The Commissioning Editor at the TV channel even sent a note saying how happy she was, and that hardly ever happens!”

"Terrific. So what's next?”

"You have to make some changes.”

"Our Stylist. Yeah, he's basically responsible for the creative overview of our output and he felt it was just a bit too 'daytime'.”

"But it's a daytime programme.”

"Yeah, he digs that, and he's cool with the whole post-retro-classical vibe, but he felt it could be more contemporary. He's sending over some dubstep tracks for you to listen to and riff off.”

"I think he needs to riff off.”

"Actually it's funny you say that, because he's done some DJ'ing in the past, so he really knows his stuff and can speak with some authority on this subject, which is obviously a big help.”

"But we're talking about a family history programme all about genealogy. It's aimed at the over-50s.”

"Which is why he thinks it could really benefit from a modern spin. You know like Harry Gregson Zimmer did with the King's Speech soundtrack? A fusion of that but with some old school trip-hop flavours. He thinks the mature youth market is going to be a huge demographic for us this year. He thinks that fusion approach is going to be much closer to the mark.”

"But if we change it all, won't the programme-makers prefer the old version?”

"Cool. Yeah. That's why we are going to have to be really clever. I'll let you into a secret. You know, a lot of TV people don't really know very much about music. They like what we tell them is cool, and my department carries lots of weight. And if we can get our Stylist on board they'll be really impressed with that.”

"Won't they just insist on the piece they actually, you know, like?”

"Well there's a world of difference between what they 'like' and what they 'need'. The Stylist thinks they'll prefer his vision and besides, he outranks them, but really doesn't want them to know this.”

"He doesn't want them to know that he's their boss?”

"No. Good heavens, he's not their boss! We completely respect the independence of our production and development teams' decisions. It's just that he's the CEO's nephew and it's a politically sensitive subject. I'm sure you understand.”

"I see. But won't they want to know why I've decided to change everything?”

"Not if you're subtle enough.”

"So you want me to add a load of trip-hop and dubstep elements to a 20-second waltz played on harpsichord and flute, hope no-one notices the changes, and I'm not allowed to tell them why I've done it if they do notice?”