If you think the life of a media composer is difficult today, spare a thought for the man who invented the job. 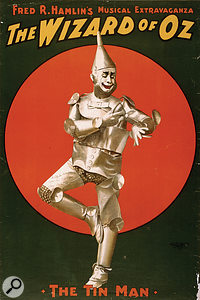 In asking to be given a heart, the Tin Man realised that he was ruling himself out from ever becoming an executive producer. Released in 1939, The Wizard Of Oz was not an immediate success. Despite being critically lauded with six Oscar nominations and recognised as a triumphant technical achievement, it still took more than a decade to turn a profit for MGM. The film, now considered an immortal slice of Hollywood history, began life as a book published in 1900 by Frank Baum. Born in 1856, Baum was an enthusiastic poultry breeder, a prolific writer and a theatrical entrepreneur. He put together a musical stage version of Oz which debuted in Chicago in 1902 and was a huge success. But in 1908 — after the book and the play, but before the movie — Baum did something altogether remarkable...

Combining elements of his original Oz book and some of its sequels, the oddly titled The Fairylogue And Radio‑Plays was a multimedia theatrical show that saw Baum start on stage as if presenting a lecture, before beginning to read sections of his books. As the story progressed, characters would be revealed using hand‑tinted colour slides projected onto a screen beside Baum on stage. The spectacle for viewers would have been impressive in itself, but Baum knew a thing or two about embracing emerging technology, and even included film and synchronised on‑screen action with his script, appearing to talk and interact with the giant moving images. The show culminated in the actors themselves appearing on stage and in costume, as if brought to life.

You might think that Ready Player One in 3D at an IMAX is quite the sight, but to theatre audiences 110 years ago, most of whom would have never witnessed any kind of moving image, the impact of the show must have been literally unbelievable. And for us it is worth remembering because one of the earliest ever films was accompanied by the earliest film score ever documented. We know very little about its composer, Nathaniel D Mann, except that he had worked with Baum on music and songs for various stage versions of Oz and delivered 27 cues for Fairylogue which, decades before the playback of recorded sound was possible, would have been staged with a live orchestra at each performance. In keeping with the less racially enlightened world of the late 19th Century, Mann also published songs for musical theatre with wince‑inducing titles such as ‘My Little Lasses Candy Coon’, ‘Oh My! Wicked Piccaninny’ and 1898’s baffling ‘Open Your Mouth And Shut Your Eyes’.

Away With The Fairies

Sadly the full film and its score have long since been lost to history, and to make matters worse, Nathaniel D Mann’s name and achievement is similarly overlooked, which is why you have never heard of him. The French film The Assassination Of The Duke Of Guise was released in November 1908, four months after the Fairylogue, and carried a score by the then 73‑year‑old classical maestro Camille Saint‑Saëns which is widely and incorrectly seen as the first ever film soundtrack.

Movie archaeology aside, what I like about this story is that embracing new technology is, and always has been, one of the central themes of the visual arts. Despite playing to packed theatres, every single one of Baum’s performances of The Fairylogue And Radio‑Plays lost money. Transporting a live orchestra and tons of home‑made projection equipment to theatres across America saw to that, but more importantly, it shows us that even at its inception, film‑makers and media creators recognised the importance of the relationship between music and image.

Innovation is difficult, expensive and perilously risky. But, as we know, the fewer resources we have, the more resourceful we become. Yes, software updates and plug‑in crashes are a pain, but if Frank Baum could create a film without even living in a world with cinemas, you can overcome anything. And if you get it right you can create something even better: actual magic.