Recent NSA wiretap transcripts have uncovered a transatlantic telephone conversation which could have disastrous consequences. 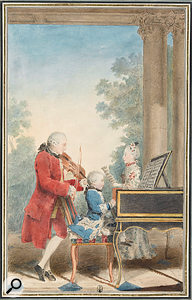 "Wolfgang, dear, it's a letter from the Emperor. He likes your Mass but thinks it will need a few changes for the American market. What do you think he means by 'phat'?”

Hey Paul! It's Lizzie here in Los Angeles. I'm working on the US version of that show you composed the music for and I've got to tell you we are all really, really excited about working with you on this project!”

"Hello Lizzie. That's good to hear. What can I help you with?”

"Well, as you know, everyone loves the music you composed and think it works really well with the show. It has just the right amount of drama, tension and big 'Event TV' sound we are looking for.”

"One of our Executive Producers has emailed you some music clips that they'd like you to infuse into your music to tailor the show more directly to US audiences.”

"Yes, I received those files. They're all techno dance tracks.”

"I know, it's awesome isn't it! We're all really psyched. Our Creative Director thinks that's going to be a really cool musical direction for us to go in.”

"Is that a problem?”

"That's great! We've gained a whole bunch of BeePees or whatever they are. That'll fit with the lighting changes for the show, which are also bigger in the US version.”

"No, I mean the dance tracks you sent won't fit my existing track, because they are much faster. I'd have to speed the original up by a massive amount and it'll sound really strange. Plus that'll also mean we have to record the orchestra again, which is a tremendous amount of effort.”

"Do you think you could have something for us to hear on that by the end of the day?”

"Er… no. Because, like I said, it's a huge effort and will most likely sound very bad.”

"OK. Well I'm gonna have someone from scheduling call you later about a timetable for those changes. But ideally we'll need them locked by the weekend.”

"Also, I'm glad you mentioned the orchestra. I've got a note here from the marketing people about the mixer or something? Can you help me with that?”

"Yeah, they've done some audience research and found that our target demographic in the 17-25 year-old category don't like hearing strings and orchestras in their music. So we'd like those parts replaced with synth lines in the final mixer.”

"But the entire track is basically nothing but orchestral strings, brass and some rhythm. They want to get rid of that and replace it with a synth line?”

"Our Creative Director has written 'Must be Dubstep Moog' in the margins here. I have literally no idea what that means, so I'll just let you muso guys get on with it, I guess! Hey, he used to be a DJ so it must be real helpful for you to get some notes from someone who can speak the same language as you.”

"Um… Lizzie, the biggest problem is not the instruments or the tempo, it's the fact that my piece is a waltz. It's in 3/4 time. It simply won't fit alongside a 4/4 rhythm.”

"It just won't work. You are talking about two mutually exclusive concepts. It would be like ordering a steak and asking for it to be covered in chocolate sauce because you think your kids will like it better. We are in a square-peg/round-hole situation here. Music is flexible and amazing but ultimately there are limits and rules. There are laws.”

"Maybe I can get someone from our Legal department to call you about that? Hello? Are you still there?…”