Off The Record: Branding

Branding is perhaps more important now than it’s ever been — but the old rules of providing a valuable service still apply.

It used to be about album credits, but the latest means by which engineers, producers and studios can get their names out there is with branded products and services. The array of plug‑ins from developers is proliferating steadily, and more and more of them are branded by production professionals, including Michael Brauer, Tony Maserati, Jack Joseph Puig, Greg Wells and Eddie Kramer.

Recording studios have become active in this niche, as well. Waves’ Abbey Road Tape, Chambers and Plates plug‑ins, and impulse responses of the old Western Recorders (now EastWest Studios) reverb chambers underscore how a well‑known studio brand can leverage its market value over the course of decades. 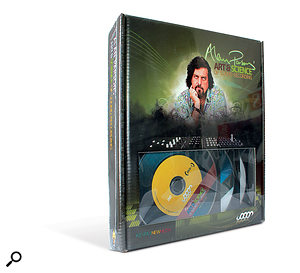 Alan Parsons is one of many engineers who has branched out into providing educational material.Photo: by Hannes BiegerEducation has also become a big avenue. Alan Parsons, for instance, has a sizeable curriculum in his Art & Science Of Sound Recording video series. Then there are aggregators, like Lynda.com, that put together one‑off video tutorials hosted by producers, engineers and mixers, such as Brian Malouf or Sylvia Massey.

Finally, there is Dave Pensado, who is in a class of his own. He has constructed an entire universe of media and products around a combination of tutorials, awards telecasts and variety talk shows. Pensado, and his business partner Herb Trawick, have taken Pensado’s Place from a robust virtual to an actual physical location, the Pensado Media Center, which opened in late 2015 in Los Angeles. In the process, Pensado and Trawick have become a force in pro audio education and sales, with over 100 schools using their tutorial videos as part of their online curricula.

It’s becoming a crowded field, and it’s one that Michael Beinhorn (Soundgarden, Marilyn Manson, Red Hot Chili Peppers) jumped into earlier this year, launching pre‑production services, a market category that’s relatively virgin ground. Beinhorn’s service looks at issues such as song assessment and ‘repair’, coaching artists and producers on how best to spend their time in rehearsals prior to production, and other critical steps ahead of actually hitting Record.

But he’s also emblematic of the phenomenon of personal branding in the music production business, and he’ll tell you that the calculations around making the move involve as much ego as economics. “I saw a gap in the market, one that focused on what happens before you go in the studio,” he says about the latter, asserting that the pressures from voracious streaming services to get more music out on an assembly‑line basis are negatively affecting the quality of the songs and their production. “No dynamics, clumsy chord progressions, these things bog a song down before it’s even recorded,” he says. “I see that as an opportunity for my skills.”

There’s no doubt that Beinhorn’s experience and ears would benefit those who seek his services. But where does that leave someone who’s occupied the pinnacle of a profession that isn’t nearly as elite as it once was? “It’s a changing business, and the economics are dictating what happens,” he says, pragmatically. Part of that process is creating a brand, leveraging a discography that was built on big‑name bands and artists taking six months to make an album in $2500‑a‑day studios for a new world of laptops and attenuated attention spans. “Does it send a signal of a career on its down slope?” he asks. “‘He produced these A‑list records and now he’s doing this?’ I don’t know, but I’m not going to spend time getting bogged down in that. Maybe there’s an invisible line, and you only know it when you cross it. I don’t feel like I have.”

Not everyone is going to be able to cobble together a second career based on their music‑production skills and credits. The trick is finding your place. Look, as Beinhorn did, for the gaps in the market, see which of your skills might plug them, and understand that promoting your brand is different to managing your production career. And remember this: there is life after the studio, but the best time to plan for it is while you’re still at the top of your current game.