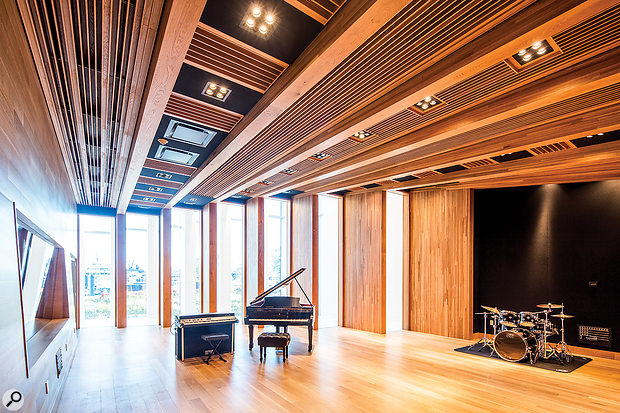 The Caribbean is a favourite holiday destination for many, thanks to its sandy beaches, clear waters and subtropical weather. It has also been a sanctuary for recording artists, but sadly, none of the legendary Caribbean studios still exist. AIR Montserrat was forced to close 25 years ago after a devastating volcanic eruption, and Compass Point in Nassau ceased operations a few years ago because of security issues. 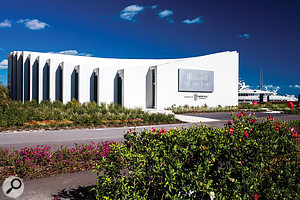 The wave-themed building was designed by Bjarke Ingels Group.However, there is now a new landmark recording studio in New Providence, the main island of the Bahamas. Located only a few kilometres away from Compass Point and from Nassau, the Bahamas’ capital, The Sanctuary was purpose-built to rival the best recording spaces in the world. Located in Albany, a luxurious resort community on the south west tip of the island, the studio takes centre stage right opposite the marina.

“Our goal was to create a structure that was symbolic of the ocean, that had the shape of a rolling wave,“ explains investor and entrepreneur Charles Goldstuck, who conceived the studio together with Christopher Anand, managing partner of Albany. The building was designed by Danish architect Bjarke Ingels of Bjarke Ingels Group (BIG), while the actual recording facilities were built by famed acoustic designer White Mark Limited. Early in the planning and construction phase, which spanned more than four years, Charles Goldstuck brought in as the studio director Ann Mincieli, the Grammy-winning producer/engineer who owns New York’s Jungle City Studios and who operates Alicia Keys’ studio in the same building. “She’s as cutting edge a studio operator as I’ve ever known, and she represents the future of leadership in the studio world,“ says Goldstuck.

The shell- or wave-shaped structure brings together the marine and music worlds under its curved roof. At its heart lies the 120-square-metre live area, comprising a main room and two booths, all within line of sight of the control room. With a maximum ceiling height of 5.5 metres, staggering amounts of white oak panelling and enormous floor-to-ceiling windows overlooking the yacht harbour, this space is a sight to behold — and it sounds as good as it looks. 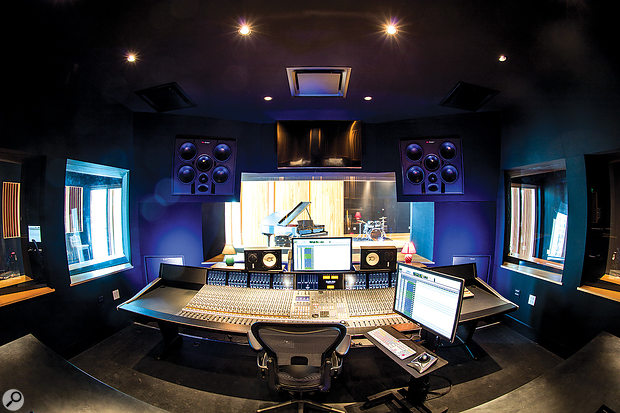 The control room is built around a 48-channel SSL Duality Delta console. 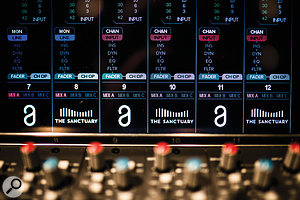 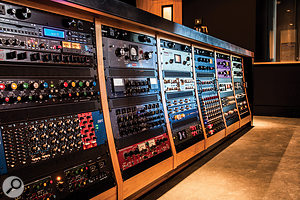 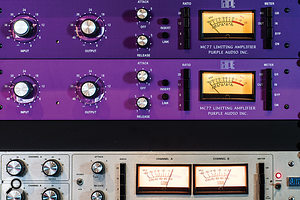 FET limiting amplifiers: A pair of Purple Audio MC77s and a UREI 1178.There are almost a dozen Neve 1083 and 1084 channels, with equalisation options including a pair of Pultec EQP-1A3s and a GML 8200, a 500-series chassis with assorted API and Chandler Limited EQs, and a Manley Massive Passive. Dynamics duties are handled by an API 2500, a Retro Sta-Level, Teletronix LA-2A, an ADR F760X-RS and a Manley Stereo Vari-Mu compressor as well as a UREI 1178 and a pair of Purple Audio MC77s, while the reverb units include a Lexicon 480L, a Bricasti M7 and a Demeter RV-2 spring reverb. 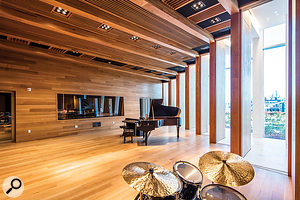 The white oak-panelled live room offers ample daylight and a view of the resort’s marina. 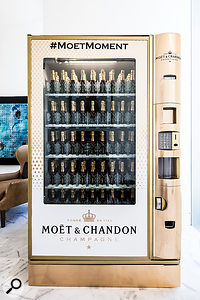 Besides the main room, the Sanctuary also offers five smaller production suites. These can be operated in conjunction with the main room, but also independently, and they serve as the hub for a music academy the studio is building in partnership with Windsor High School at Albany. Here, a programme including music lessons and songwriting camps as well as scholarships for local talent offers emerging artists a wide range of opportunities to hone their skills.

The Sanctuary officially opened its doors in April 2018, but a few sessions had already taken place during a ‘soft start’ period leading up to this. The first producer to work at the studio was Robert ‘Mutt’ Lange — who, nearly 40 years ago, produced AC/DC’s classic Back In Black over at Compass Point, perhaps the best-selling album recorded in the Bahamas so far. Other Sanctuary clients so far include Alicia Keys, Shania Twain, Nipsey Hussle and Joe Don Rooney.

When the planning of The Sanctuary started, as Charles Goldstuck says, the “industry was flat on its back“. However, he believes the world will always be in need of bold, high-profile recording operations like this one. “There is no substitute for creative teams being in the facility together with the best equipment and being able to experiment with music from digital all the way back to analogue and back to digital. With the vibrancy of the music and industry today I believe that more recording studios will be built in the next 10 years, and they will all be necessary!“