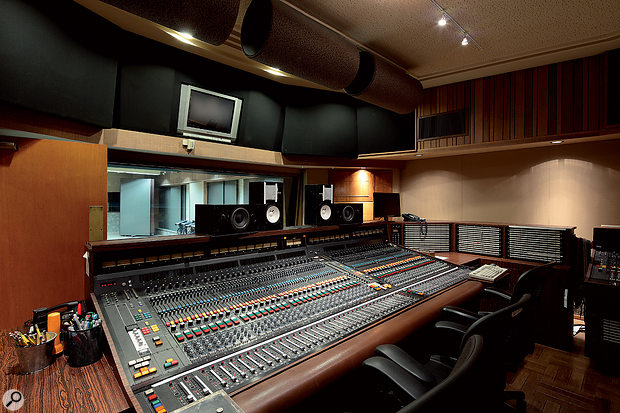 The control room in Sunset Sound Studio 1, with its custom API/Di Medio desk. 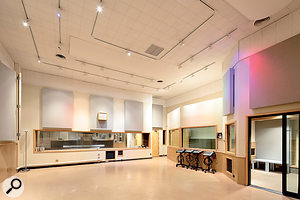 Sunset Sound is perhaps the oldest independent recording studio that remains in the hands of its original owners. It was founded in 1958 by Tutti Camarata, an arranger who had been working for the Duke Ellington and Benny Goodman big bands before he was hired by Walt Disney as a director of recording. Legend has it that Disney replied "I'd rather be a client!” when Camarata proposed building a recording studio for Disney's company, encouraging entrepreneurship on Camarata's side. Camarata found a former automotive repair garage in the heart of Hollywood, on the corner of Sunset Boulevard and Cherokee. With its non-parallel walls, ceiling and floor all slanted towards one corner, where excess fluids could drain, the space proved ideal for setting up a recording studio. 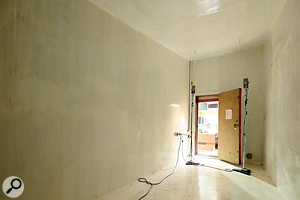 Unlike many studios, Sunset Sound still has its original echo chambers. This is the Studio 1 chamber. 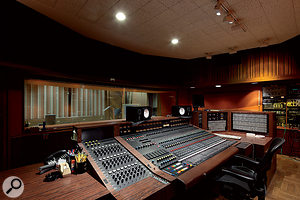 The control room in Studio 3.For the first four years, Sunset Sound was used exclusively on Disney productions, including Bambi and 101 Dalmatians. It was not until 1962 that the studio opened its doors to external clients. Early customers included Herb Alpert, who produced the records for his A&M imprint at Sunset Sound, including releases by Latin jazz legends Sergio Mendes & Brazil 66. The studio was soon booked so solidly that Tutti Camarata bought a neighbouring restaurant, in order to convert Sunset Sound to the three-studio complex it remains today. Later in the '60s, engineer/producer Bruce Botnick appeared at Sunset Sound with a band who would soon become superstars, and who would record the lion's share of their oeuvre at the studio: the Doors.

It did not take long for Sunset Sound to become recognised on the other side of the Atlantic as well. The Rolling Stones recorded portions of their most acclaimed albums at Sunset Sound, including Beggars Banquet and Let it Bleed, and they also put the finishing touches to their masterpiece Exile On Main Street there. Other rock giants heard the call too: Led Zeppelin mixed parts of their untitled fourth album at Sunset Sound. The studios also attracted many jazz and soul luminaries, and the list of its well-known clients runs literally from A to Z, including Louis Armstrong, all former Beatles members, Bob Dylan, Elton John, Rod Stewart, Prince, Miles Davis, Whitney Houston, Van Halen, Tom Waits, Neil Young and Frank Zappa. 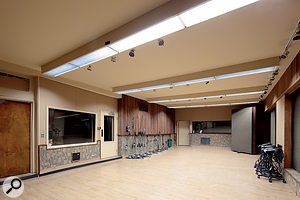 Sunset Sound Studio 1 was built as a car repair workshop, with a sloping floor to drain fluids away. 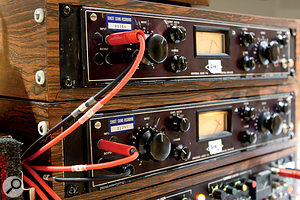 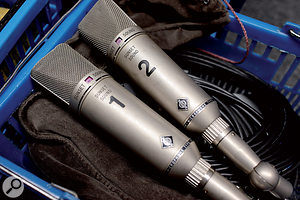 A pair of Neumann U67 microphones, probably the same mics pictured being used by Mick Jagger and Keith Richards for vocal overdubs on Exile On Main Street. 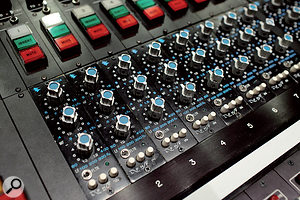 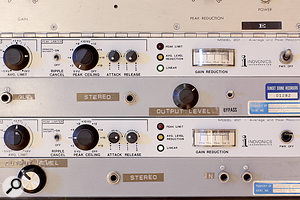 What makes this studio so special? The rooms themselves play an important role. As Grammy-winning producer, mixer and engineer Joe Chiccarelli puts it, "They have a natural '70s kind of tone. They're not too wet and splashy but they still have a nice reverb time and ambience around instruments. They sound honest.” With all their wooden (and their distinctive faux wood!) surfaces, the rooms certainly have a great vibe. Also key to the studio's distinctive sound are the original echo chambers, which, equipped with RCA BX44 microphones and Altec 'Voice of the Theatre' speakers, have a character all of their own. Each room is equipped with a really special console too: Studio 2 boasts a Neve 8088 desk, while Studios 1 and 3 have been equipped with custom Sunset Sound/API/DeMedio consoles, featuring 990 op-amp-based preamps and API 550a EQ modules in each input channel.

The outboard equipment includes venerable classics such as Urei 1176LN and Teletronix LA2A compressors, Pultec equalisers, and more unusual processors such as the Inovonics 201 limiters, which can be found in the Studio 2 outboard rack. The floating outboard gear, which can be used in all rooms, includes stacks of rare compressors such as the Universal Audio 176 and 'blue stripe' 1176 limiters, all mounted in Sunset's signature faux wood cases. The microphone lockers hold more classic units than we could possibly mention here, including a couple of legendary Telefunken ELA M 251 valve mics.

All Sunset Sound rooms are equally suited for mixing and recording, although most clients seem to book the studios for the latter, and their usage reflects changes in the music industry. According to long-time studio manager Craig Hubler, the studios are still solidly booked for months in advance — but whereas studio time, until a few years ago, used to be almost always booked by record companies, these days about half of the bookings are being paid for by bands or their management.

In 2012, Sunset Sound celebrated their 'official' 50th anniversary, marking five decades since they opened to external clients. In honour of this special occasion, Sunset Sound will soon release a 500-series microphone preamp that's closely modelled on their custom console preamps, including discrete 990 op-amps and custom Cinemag transformers, making a small yet very important part of their sonic signature available to the outside world.