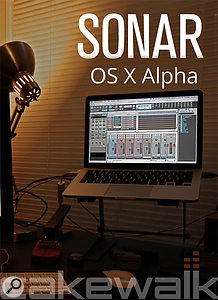 After many years of rumours, Cakewalk have announced an alpha testing phase for Sonar OS X, marking the first time the DAW has been available on the Mac platform. Not only this, but Cakewalk have also announced a ‘Lifetime Updates' scheme for Sonar Platinum, and a new focus and commitment to creating the most stable audio programme on the market.

Clearly, the move to Mac is rather a momentous one for the makers of Sonar. The DAW has a long history of PC-only compatibility and deep, Windows integration, but according to Cakewalk CTO Noel Borthwick, it was "increasing interest in SONAR from the Mac music creation community” that really got the ball rolling.

Public testing on the Mac OS X platform is scheduled to start in Autumn 2016. This limited yet fully functioning free preview version of Sonar will run its own native plug-ins and work with any Core Audio interface. Along with the free download, users will be invited and encouraged to offer feedback on the program.

We got to ask Cakewalk CTO Noel Borthwick a few questions about the upcoming Mac version of Sonar.

How similar will it be to the PC version? Can you open the same projects? Will it come with the same bundle of plug-ins?

"It should work identically to the PC version of SONAR, because both the Mac and PC versions use the same code. This also means 100% project file compatibility. The first free alpha version will include a subset of Cakewalk plug-ins and modules for the ProChannel, our critically acclaimed, per-track proprietary modular channel strip. It resembles an analog console and includes effects like Console Emulation of three vintage consoles, QuadCurve EQ with four modes that simulate classic console strip EQs as well as a fly-out spectrum analyzer, tube distortion, and compression including a “4K” compressor on every bus. Other DAWs let you configure how a mixer looks; SONAR lets you configure the actual mixer architecture."

You say that the impetus for creating this software came from non-Sonar users. In what areas do you feel Sonar outperforms competitors on the Mac platform?

"The user feedback we’ve received in recent years is that SONAR Platinum combines the digital and analog worlds like no other DAW on the market. It’s not just about features like the ProChannel—Cakewalk was also the first company to offer a 64-bit, double-precision audio engine, which virtually eliminates the possibility of rounding errors in super-complex projects, and maintains audio clarity.

"Other areas where SONAR stands out include our streamlined workflow, editing tools, and award-winning Skylight user interface—the term we use for SONAR’s highly customizable layout. It’s comprised of a Browser, Inspector, Track View, Console View and Control Bar; you can “dock” many items, as well as move the modules around to your liking. Using shortcuts to show and hide modules can gain a lot of screen real estate fast, so Skylight really makes sense for those who like to work quickly. Some of our “all-in-one” composers say when they’re asked to do a job shootout, they’re able to deliver multiple options in the time that others deliver just one.

"We have also worked very closely with Celemony to integrate Melodyne seamlessly into SONAR Windows. Thanks to full ARA (Audio Random Access) integration, you can work on Melodyne in SONAR’s Track View in real-time, without having to render or transfer any data. SONAR also works with Melodyne’s new Tempo Detection engine, so you can do techniques like drag a clip that wasn’t recorded to a click to the timeline, and create a matching tempo map automatically. We're working very hard to bring this functionality to SONAR OS X as well.

"There are many other notable features, but another popular one is Mix Recall, which takes snapshots of a mix “scene” and saves the snapshots within the project, so you can select different mixes without having to save/load or export/import. It even lets you export different versions of a song in one go—great for clients. SONAR is also the first program to offer upsampling, which provides the benefits of recording at higher sample rates for plug-ins that don’t oversample internally. This can really help clean up a mix and improve its clarity.

"Those are some of the ways where SONAR outperforms other DAWs, and we are certainly excited to hear the feedback from all the new users in the testing Alpha phase. We’ve worked hard on making SONAR sound great too, and I think that’s where a lot of people who don’t know us will find a big difference."

Sonar has long been known for close integration with Microsoft. Will you be able to achieve the same things without having the same degree of co-operation from the OS manufacturer?

"While we integrate with the OS at a low level for certain operations, this is fairly well abstracted from SONAR so most of the code is OS agnostic. However, keep in mind that we are at an alpha stage so we still have a ways to go before we are fully satisfied with the performance."

In what way is the Alpha version limited?

"Although the first free alpha version will include a subset of Cakewalk plug-ins and ProChannel modules, it will not run third-party plug-ins. Also, SONAR for OS X will work with any Core Audio-compatible audio interface, but you won’t be able to use custom ASIO drivers. A few more “Windows-centric” features such as Media foundation Video support are not supported; support for third party plug-ins and video will be added later."

Other companies have tried to port DAWs to Mac in the past (and some have failed). What challenges have you faced and had to overcome?

"SONAR is a sophisticated, complex DAW with a Windows legacy. While most of the code is OS agnostic, there are pieces that have OS dependencies like video and 64-bit processor support. These are the more difficult areas to bridge."

Can you explain more about the plug-in system? Will it use VST or Audio Units? When will this be implemented?

"AU plug-ins are not supported at this time, so for now the Mac version supports the same plug-in standards that the SONAR Windows supports— VST2, VST3 and DX. Cakewalk plug-ins in these formats are supplied with the Alpha version, and are distributed as part of our installer, so users will be able to experiment with plug-ins in SONAR OS X.

"We’ll be updating our site with more information in the near future and people can go to www.Cakewalk.com to keep up on the latest developments with the new platform."