Korg have been busy, launching at NAMM 2019 no fewer than two new Volca synths (one of which, the £179$199 Volca Modular, gets an exclusive review in the February 2019 issue of SOS, on sale January 24th). Alongside the Volcas, there are new editions of all three of their main keyboard workstations, the Kross, Krome and Kronos, as well as an expanded Minilogue, the XD. 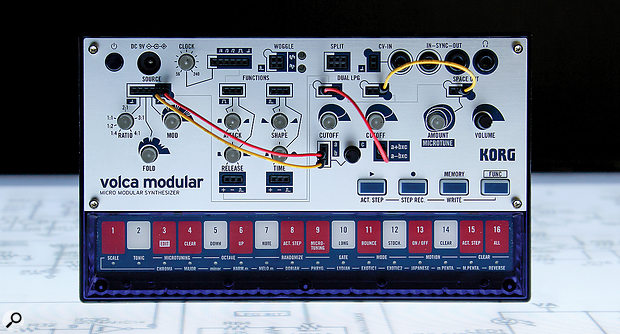 • Volca Drum
The third drum synth in the Volca range, this is a battery-powered digital percussion synthesizer with a flexible 16-step Volca sequencer and custom LCD. Six-voice polyphonic, the Volca Drum quirkily generates its sounds from modelled analogue waveforms treated with bit reduction, a wave folder and an optional overdrive. The output then passes through a modelled waveguide resonator, adding the sonic qualities of resonant tubes or oscillating strings. Korg Sync in and out jacks are provided, and the Volca Drum can be locked to MIDI via a MIDI input, but there is no MIDI out. The Volca Drum retails for £150$149.

• Minilogue XD
Based on 2016’s successful Minilogue, the next-generation XD features the same twin analogue oscillators and 37‑slim‑key keyboard, but adds a third digital oscillator, a larger display, a more powerful step sequencer (with the ability to record real‑time changes to the front-panel controls), micro-tuning facilities from the earlier Monologue synth (including some scales designed by Aphex Twin), and more patch memories (500, with 200 presets). The new digital oscillator can create noise, function as a two-operator FM oscillator, or play user-defined raw waveforms or samples. The added multi-effects include wave-shaping, a two-pole filter, overdrive, reverb and delay, and as with the third oscillator, there is also scope for users to create and store their own effects using a software development kit. Twin CV input control jacks and a footpedal input are also new, following user feedback on the original Minilogue. The Minilogue XD costs £565$619.99.

The 61-note version of the new Krome EX workstation.

• Krome EX
The Krome music workstation has also undergone an upgrade to become the Krome EX, adding many new samples and Programs, including new grand piano sounds recorded by DSD aficionado and mastering engineer Seigen Ono, and three types of heavily multisampled electric piano with modelled amps, cabinets and multi-effects. There are also new ethnic instruments, EDM sounds and sound effects, making a total of 896 factory Programs and 512 Combinations, and 2500 drum samples, with direct-miked and ambient layers for each. Like the Kronos SE, the Krome EX is sold as a five-octave (£869$1049.99), six-octave (£1080$1249.99) or seven-octave (£1299$1649.99) model.

The new Kross SE is available in four colours.

• Kross 2 SE
Finally, new models of the Kross 2 61-note workstation synth, distinctively liveried in neon green, orange, red, and blue, were also launched at NAMM. Aside from their changed colour, these also feature extra piano and electric piano sounds. All four are priced the same, at £725$749.99 each. There's just one question... do you play 'em or lick 'em?