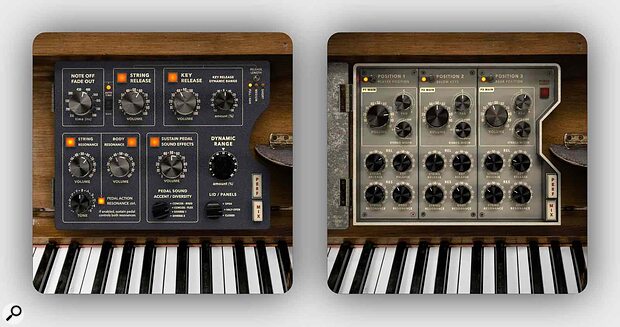 Swedish virtual instrument developer KeyPleezer have announced the release of LivingRoom Upright Piano, an upright piano sample library that captures the sound of an instrument built by a South Swedish maker and tuned to 98% accuracy. KeyPleezer say this results in a natural and realistic sound, and provides an alternative to perfectly tuned grand piano, or detuned honky-tonk piano libraries. 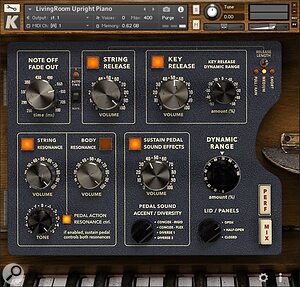 LivingRoom Upright Piano offers a wealth of options to fine-tune the library's sound.LivingRoom Upright has been recorded with three stereo pairs of microphones. The first pair were placed in the player position, capturing a sound and image that will be familiar to pianists. A second pair below the keyboard provides an alternative, brighter tone with less stereo width, whilst the third pair at the rear of the instrument near the openings gives a distinctly warmer sound. Placement for all three pairs was relatively close to the instrument, with the developers aiming to capture a dry and intimate sound.

Attention has been paid to all of the instrument’s internal components and behaviours, with string dampening, mechanical key release sounds, pedal sounds and behaviour, string and piano body resonances all being captured multiple times to ensure a nuanced and realistic sound that fully recreates the original instrument. A total of 14 playing velocities have been sampled, with each key featuring two layers of sustained notes (seven for pedal on, and seven for pedal off).

LivingRoom Upright is available now, and requires the full version of Native Instruments’ Kontakt (5.4.2 and above). KeyPleezer are currently working on versions for SFZ and EXS24/Sample, with more information to follow.

An introductory price of $87 is being offered until 17 July 2022, after which the library will cost $119. KeyPleezer are also offering a free version with a reduced set of features — more details are available on their website.