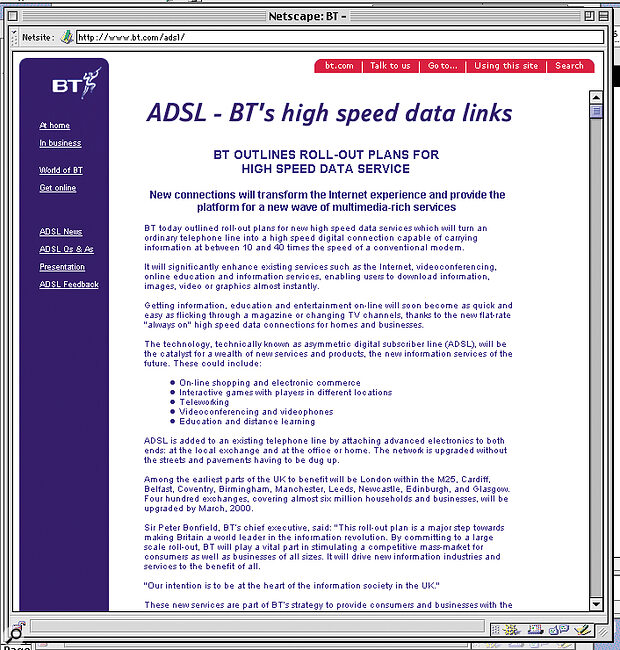 BT's own introduction to ADSL, from the www.bt.com site.

Dave Shapton explores the ways in which new technologies such as ADSL will shape the Internet of the future. If there is one...

It's happening! Now! The Internet Revolution! "Big deal," I can hear you saying. We've been stuck with pitifully slow dial‑up connections over flaky phone lines for what seems like centuries. It takes hours to download music and software. You lose your connection when the download indicator says 98 percent and you have to start again. Live streamed video is a joke through a modem. And — even though you might be imagining this — it seems to be getting slower. Just try a download from across the Atlantic on a weekday afternoon.

Nevertheless, I assure you, the revolution really, really is happening now. And, perhaps surprisingly, the effect of it is that the Internet — as we know it — is going to disappear.

Have I gone completely mad? Well, that's one possibility; but in mitigation, and in order to fend off the men in white coats, let's look at a few emerging trends. (A lot of this may sound like general Internet and computing stuff, but stay with me, because where this is leading is very good news for musicians and recording engineers alike.)

Bandwidth is increasing. In fact, I believe we can assume that there is no practical limit to bandwidth. Internet Service Providers are only limited by their ability to keep up with the staggering increase in demand. There are products out there that can transfer terabits per second, but no‑one is going to deploy them until we actually need that sort of capacity. Meanwhile, ADSL and Cable Modems are round the corner. 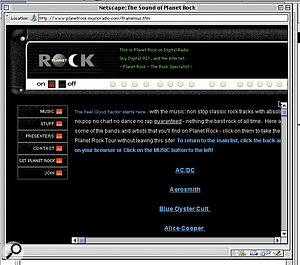 Planet Rock (www.planetrock.musicradio.com/) is an example of the convergence between new and traditional media: it's a digital radio station with additional content delivered over the Internet.

ADSL (obviously!) stands for Asymmetrical Digital Subscriber Line. It is potentially tens or hundreds of times faster than a modem or even ISDN. It's asymmetrical because the return leg (from you to your ISP) is very much slower than the link in the other direction, although typically still faster than a modem.

The Subscriber line, which is the bit between you and the exchange, is — despite the implication that it is digital — still the same old piece of copper cable that your phone line has always been. The clever bit is that ADSL modems can modulate dozens of carrier frequencies with digital information at frequencies way above those used for voice communication. This is great because you can use your phone line in the old‑fashioned way at the same time as you are connected to the Internet. However, because ADSL uses radio frequencies on cables that act more like aerials than conductors, there is a limit to the distance you can be from your local exchange before the data throughput is severely curtailed. So, some houses will not be able to use ADSL — especially in rural areas, which are miles away from an exchange. (I've heard that in the USA, estate agents are already supplying information about the ADSL bandwidth available to properties that they sell!)

By spring this year, BT is hoping to have 400 ADSL‑enabled exchanges serving six million people, and the cable companies are rolling out their high‑speed modem services as well. BT has just announced that it will wholesale ASDL to Internet Service Providers at around £35 per month, which means that it will cost you and me in the region of £50. This sounds like a lot, and it is, but it's well worth it. Don't forget that ADSL is a permanent connection — there's no usage charge. You can watch video and download audio all day, and there's nothing to pay on top of the monthly fee.

Just to put the capacity of ADSL into perspective, uncompressed stereo 16‑bit audio represents 1.4 Mbits of data per second. ADSL data rates go as high as 6 Mbits/second, although BT's offering will only be around 0.5 Mbits/second; you'll be able to download a megabyte in between two and 10 seconds. There's even talk of the successor to ASDL, VDSL (Very high‑speed Digital Subscriber Line), which is an order of magnitude faster — perhaps 6 Megabytes per second. With VDSL you could download an entire CD in less than two minutes, or an entire CD collection in a couple of hours! Even if you can't get ADSL yet, BT has just stated that unmetered modem access will be available in the very near future. For about £35 per month, you'll be able to stay connected as long as you like — not as fast as ADSL, but great for MP3 downloads.

In the future, connections will be wireless. No wires. Anywhere. Maybe... It's hard to say exactly where wireless high‑bandwidth is headed, because at the moment ADSL and cable modems are such strong contenders. Homes will certainly be wireless: there's a demand for this from a technical and a practical point of view. There are just too many cables and it would be great to get rid of them. There's no shortage of wireless technologies waiting in the wings, but, needless to say, many of them are incompatible. There's even a wireless version of Firewire ('FireWireLess?'), which has a capacity of 24 Mbits/sec, enough to carry digital television or 20 channels of uncompressed digital audio. It's not been ratified as a standard, and may never be, but it underlines the principle that bandwidth — even without wires — is not a problem. It would be great to think that home studios could be wireless, and perhaps they can be. But it's likely that there will be latency and synchronisation issues to be dealt with. Perhaps we will have to define synchronous zones, with conventional wiring, where timing is critical.

If you're still sceptical about the wireless future of the Internet, ask yourself why mobile phone companies are worth so much. Why is it that Vodaphone can mount a hostile takeover bid for another company with a sum that is greater than the gross national product of a small country? I don't think such massive valuations are based solely on the revenue potential from voice calls. More likely is that the phone companies recognise that the future of the Internet is cable‑free, and that the amount of data to be carried is going to massively more than mere voice traffic. Don't be misled by the slowness of today's mobile data links (9.6 Kbaud if you are lucky) and don't worry about capacity. There is almost no limit to the number of connections a cellular network can set up, because as demand increases, the size of the cells shrinks, allowing the same set of frequencies to be used again and again. Vodaphone has just confirmed that it is going ahead with the next version of GSM, which will allow them to route packet‑switched (ie. Internet) data. Eventually, we might see 'Microcells' where every lamp post and telegraph pole has a cellular transmitter/repeater.

What would make all this work is the use of Packet Switched data (in other words, the same kind of data addressing that is used by the Internet), which would have the effect of unifying all the types of data network (including telephones, television, and more) into one homogeneous network.

Microwaves can show adverts for sponge puddings. Who knows, in a few years you might be able to watch a video on the side of your cornflake packet.

In the future, the Web will disappear and will become television. Or television will disappear and will become the Web. Or they'll both disappear and we'll have something else. Although I spend virtually every waking hour preparing this column, I sometimes get a chance to drop in at my other place of work, which is a digital media and IT consultancy. It's clear from the calls I get there that what everyone wants is high‑quality audio and video streaming over the Internet. They're not always sure why they want it, or what they will do with it, but there's definitely a buzz about it and people want to be ready for it.

I think the reason for this is that it is entirely possible that the existing broadcasting system — by which I mean the five terrestrial channels, terrestrial digital and digital satellite TV, not to mention radio — will be replaced by Internet broadcasting. And the idea of broadcasting itself could become marginalised by video‑on‑demand.

That's why I think the Web will become television. At the point where you can see television‑quality video on your computer, or browse the Internet on your television, I don't see how the two devices can remain separate.

Now, here's where it gets interesting for anyone who writes, plays or records music. When the Internet and Television merge, there's going to be an explosive rise in the number of TV channels. If they are going to attract viewers, they will have to produce programmes that at least some people want to watch. Very, very few channels will have big audiences. Most will settle for maybe a few tens of thousands — the same sort of numbers that buy specialist magazines. But that's the point: by specialising content ('Narrowcasting'), it's feasible to get a steady, loyal audience. And by targeting content at a specific interest group, you can attract advertisers who know that they will be talking directly to the people most likely to buy their products.

Of course, someone has to make these programmes. Someone has to create the adverts. And someone has to write the music for them. Don't expect to make a fortune by writing for these new television outlets: production budgets will be laughably low. But there are going to be so many of them that I can see a shortage of skills when it comes to making and post‑producing the programmes. Even if you don't get a chance to write music for the new channels, use the technology skills you have to learn about digital video. What could be a better way to showcase your music?

And this is just the start of it, because before long, almost everything will have an Internet connection. I read a report recently which said that by 2010, 67 percent of devices with a microprocessor will be Internet‑enabled. If anything, I think that figure is on the low side. If these devices have a video display, then they can stream video from the Internet. Fridges can show adverts for supermarkets. Microwaves can show adverts for sponge puddings. Who knows, in a few years you might be able to watch a video on the side of your cornflake packet. (If you think that sounds far‑fetched, what if I said you could buy a sampler for £2.50? That's what it costs to buy a birthday card with a microprocessor, memory, software, a loudspeaker and an amplifier that sings — not bleeps — 'Happy Birthday' to you). I'm predicting that in 10 years time we won't just have a hundred television channels, we'll have tens of thousands.

So what do I mean when I say that the Internet is going to disappear? Well, when was the last time someone asked you if you are on the National Grid?