Back To The Future: First Issue Of SOS Skip to main content

Back To The Future: First Issue Of SOS

"Sound On Sound has been specially created to help you stay in touch with modern music technology as it begins to fuse together the once well‑defined areas of sound generation and sound recording. We hope you'll be as excited about it as we are.” Founding editor Ian Gilby's 'mission statement' at the start of the launch issue in November 1985 encapsulated a pivotal moment in the development of music and recording technology. Sound On Sound launched into a world where the possibilities were being transformed and barriers to creativity further dismantled with every month. Narrow‑gauge multitrack was making traditional recording methods more accessible than ever before, but it was the arrival of MIDI sequencers, synchronised to tape via timecode, that was to really change everything. Sound On Sound was right there at the cutting edge of that technology, with articles on SMPTE and on sequencing software and hardware from the very first issue. 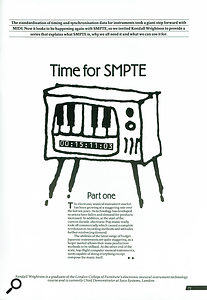 'Timecode: why we all need it and what we can use it for”. Reactions ranged from "Ugh?” to "Wow!”, but mostly centred round "…umm…”Not everybody 'got it' straight away, of course — 1985 was a time when musicians and even engineers might still happily choose to believe that MIDI was a passing fad that had no place in 'proper recording'. Even first‑issue cover‑featured Midge Ure states: "MIDI I find baffling… I really do”, but as the thirst for knowledge and the need for understanding developed, Sound On Sound was soon recognised as the authority on the new methods of recording — a position that you, the readers, have helped us to maintain for the last 25 years. Thank you, on behalf of the whole SOS team, for all your support, encouragement and feedback.

As we look forward to the next 25 years, we hope you'll enjoy a little look back at where it all started. October 18th, 1985 — a world in which Margaret Thatcher is Prime Minister in the UK, Ronald Reagan is President of the USA, and into which Intel had only just introduced the 32‑bit 80386 computer chip, clocked at a whole 12MHz! Back To The Future is the biggest‑grossing film of the year and Norwegian group A‑ha are at number one in the US charts, while Jennifer Rush's 'Power Of Love' bumps out Midge Ure's 'If I Was' from the top spot in the UK chart, thereby just preventing his only solo number one from coinciding with his appearance on the cover of the launch issue.