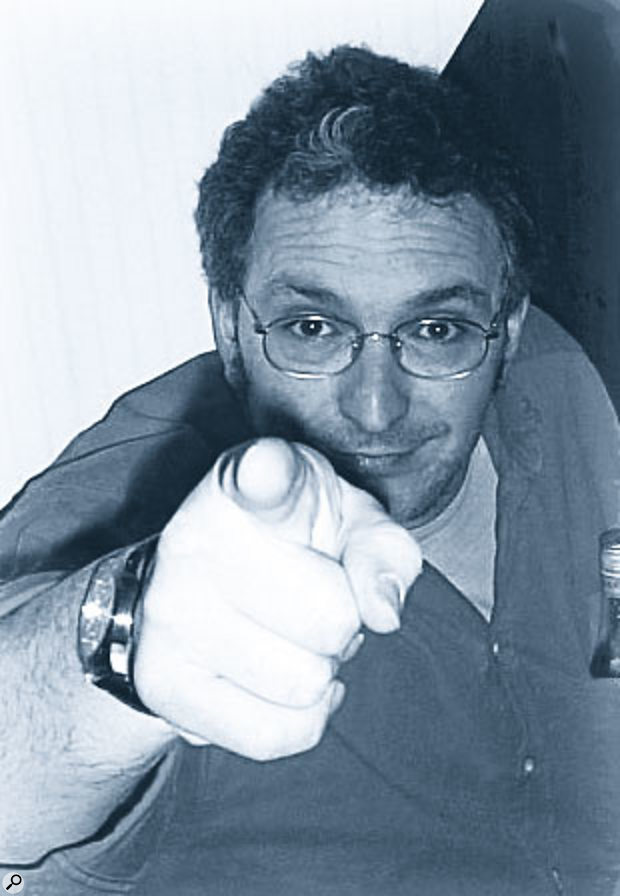 The revolution in home recording and CD burning is liberating more and more people every day. Never before in the history of recorded music have so many had the opportunity to record so much for so, um... few people to listen to.

The vast majority of what is being committed to disc for all eternity (or until the reflective coating wears off) is self-indulgent, half-baked, unlistenably bland rubbish. The single reason for this is not that most music-makers these days have no talent, or that they spend too much time quantising hi-hats and not enough time actually playing music for the sheer joy of it — although that doesn't help. It's that these days everyone thinks they have complete and total artistic vision and need no help at any stage of producing their work.

There are a few historic examples of the work of one person achieving critical and commercial success, but for every Brian Wilson there are a million Johnny No-chances churning out songs that make even their own mothers wince when they lie and say, 'It's very nice, dear'. Don't take my word for it, take a look at the Beatles, probably the most influential band ever. Prior to meeting George Martin, they were a below-average quartet for their time. If you haven't heard their Decca sessions, you haven't missed much, except an illustration of the importance of having a more experienced ear to guide raw talent.

An argument against what I'm saying could be that the current crop of boy and girl bands are all told what to sing, how to dance, when to talk and where to get off after a couple of singles, and they're all complete and utter crap. I'd agree with that, but I'm talking about music, not meaningless, mind-numbing corporate bilge, designed to lower our standards and expectations. (For all you Pop Idol executive types — and I know you read this magazine every month — go back to selling timeshare apartments and leave my industry alone.)

If you're in the process of recording some material in your home studio for release on your own label — stop! Is what you're doing just half an idea which took off when you used a cool sample or plug-in? If it is, I urge you to consider keeping it to yourself. Your music may well be its own reward, but it doesn't have to be everyone else's booby prize. Take a hard look at it. Is the music you're making really for the good of the listening public and the world, or is it just a waste of electricity and natural resources that will end up in your friends' CD racks, played (or fast-forwarded) once, never to leave its case again?

But wait — my Jedi mind powers are telling me that you don't think this column is about you! Maybe you are rarer than rocking horse poo and an exception to the rule. If you believe in your art, and I mean really believe in the music you're producing, take it to people who you respect (regardless of whether you know them or not). Ask them for their honest opinion, and if they say it's brilliant, ask them to invest some cash into it — nothing concentrates the mind as much as money. If they refuse, ask them if they are prepared to get involved in the development of the work. If they can't, for whatever reason, you have to seriously ask yourself why.

Nobody in their right mind would pass up the chance to work with the next U2, Sting or [insert your all time favourite band here]. Legend has it that George Martin was walking past an office when he heard the Beatles and put his (not insubstantial) reputation on the line to work with them. I myself get sent, on average, a dozen unsigned, unsolicited CDs every month. The vast majority have never been out of the bedroom where they were recorded, and all but a few sound, at best, half-finished, ill-conceived and directionless. (If you're one of those who has sent me a CD over the last couple of years, I assure you that yours was one of the very best I've ever heard and this article doesn't apply to you and your unique talent.)

Even if you think you have what it takes to make a great record without borrowing anyone else's expertise, how is anyone going to find out about it? Here's a little sum for you. Work out how much it cost to record and manufacture your CD (including your time at, say, £20 per hour), add 50 percent, and that's how much you should budget to promote it to the managers, publishers, record companies, radio and TV stations, the music press and anyone else who could smooth your path into the consciousness of the planet's music buyers. That's the ratio Hollywood uses to market their movies, and they continue to sell absolute crap to hundreds of millions of satisfied customers every week. So if they can, there's hope for us all.