With the rumour mill churning out tales of the Acid-like functionality of Garage Band 's Apple Loops format being incorporated into the next version of Logic Pro, I sometimes wonder how much easier today's software can make it for the modern composer, student or hobbyist. How long will it be before we reach a point where we just press the Apple key, make a coffee, and watch our iBooks churn out the next Cheeky Girls hit? 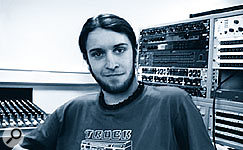 In my day job as a lecturer in music technology, it is about this time of year that I meet a new crowd of young hopefuls, bright-eyed and bushy-tailed, clutching a shiny portfolio CD. In fact last year I met a very self­assured lad who, after forcing me to listen to 15 minutes of derivative hip-hop clearly slung together from three loops in Ejay, insisted "I know I've got talent. The reason I want to get into music is because of Puff Daddy." 'Nuff said.

The main perpetrators are of course Ejay, Garage Band, and to a certain extent Fruityloops and Acid. I can't help but wonder what it is about these programs that induces such delusions of grandeur in the user, because make no mistake, the trend is becoming ever more popular. Now, I'm no killjoy — I can understand the potential uses of such packages, and the entertainment value to the layman of getting their 'musical wings', especially when some of the results produced can sound really convincing. It's great that anyone can pick up a cheap product that both looks good and also actually works (unlike some of those older budget sequencers, naming no names!). The point is that I can pick up a copy of iMovie or Windows Movie Maker and have great fun compiling home-video footage, just like the next man, but it doesn't make me the next Rodriguez or Spielberg, in the same way that using Ejay sadly won't make me the next guy to date Jennifer Lopez.

Hang on a second though, won't these programs lead tomorrow's producers onto bigger and better things? The truth is that in the majority of cases they probably won't, and the reason, if you confront the average Garage Band user with Logic Pro or Cubase SX, quickly becomes obvious — having been accustomed to achieving decent results with minimal effort, the user rapidly gets frustrated at not only the sheer range of options, but also the comparative amount of work necessary to get results of similar quality.

So if the results can be comparable, why not just ditch the more complex packages? Well, for starters, there is the question of originality. After all, does slinging someone else's loops together in an A-B-A arrangement and sliding the tempo bar up really count as composition? If the charts are anything to go by, dub-plate aficionado s may have a thing or two to say about that. Moreover, in an educational context, without knowledge of 'proper' sequencers, any understanding of the intricacies of MIDI, groove quantising, hardware synthesizers, samplers, and so on, simply goes out the window.

The relative complexity of various sequencing and software packages aside, it's worth noting that the manufacturers of these packages aren't to blame — in most cases they never marketed these things as serious music-making packages, and who can blame them for making sequencing easy? The SOS cover story on beat slicing in the June issue reminded me that a lot of the ideas can be incorporated into professional work at the very least as nifty timesavers; I still remember when Recycle came out and saved me hours of chopping up loops by hand in a stereo editor! When chatting to a composer colleague of mine recently, he enthusiastically told me about how he would use the new Apple Loops functionality in Logic to drop in the odd percussion loop over his work, augmenting his existing skills with the new technology.

As a final thought, lately I have observed a slow culture shift amongst my media and music students. Once upon a time, the media student would approach their musician friend and ask for some background music for a given TV piece. Nowadays, there is no need, because it's quicker and easier for them to knock up some simple background fare by themselves. Given that it's only musical fodder, the musical quality doesn't need to be high, and the composer misses out on the gig. It's only a matter of time before someone develops something along the lines of Vocaloid or Virtual Guitarist for Ejay. Perhaps it's time we took stock of just how easy this new 'loopamatic' software has made, and will continue to make things, and concentrate on upping our game accordingly, lest we lose the gig too.

Duncan Williams lectures at Westminster College, and is also a freelance engineer with a background in DVD authoring and composition.