In techno, the machine rules...

Drum kits are fine musical instruments, but they should be kept out of electro music! They are not appropriate to the genre, are limited in sonic possibility and, in my opinion, ruin live electronic music. I'm in a gigging electro band and it's depressing to frequently have to share the (usually tiny) stage with one of these outdated acoustic beasts that one of the other 'electro' acts on the bill insist on using. 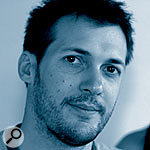 Photo: Fizz at Lucid Pictures. About The Author: Oli Freke is the producer behind the electro band Cassette (myspace.com/cassettecassette), and a member of the drum-heavy Maracatu Estrela do Norte. He also works behind the scenes at Times On-line, where there are sadly no drum machines (or even drum kits) to be found.

Before I launch into the reasons for disliking the drum kit in electronica, I should state that, as well as writing electronic music, I do actually also love drums and percussion. I even play the drums, to enhance my understanding of rhythm and swing, and have performed at Glastonbury with the Brazilian rhythm band I am a member of.

However, the acoustic drum kit has no place in electro. Not proper electro, anyway. Not the electro of my youth, bands such as Kraftwerk, Tangerine Dream, and Orbital; and not the electro of now, such as Four Tet, Aphex Twin and Kid Carpet.

None of these pioneers felt the need to add an acoustic drum kit to their setup as a sop to tradition. Why would they? They had the infinite expanse of uncharted electronic percussive sound to explore, so why limit it to the cliché of a set of drums?

Drum kits are for rock & roll. They are great for bashing out the heavy 4/4 needed to back up bass guitar, electric guitar and a charismatic singer. They're rubbish in electro. They can only do one sound: the drum kit. Electro demands an innovative and imaginative solution to rhythm through the use of drum machines, or by using a sampler to inject any sound in the universe into the percussion section. Imagine if Pink Floyd had tried using a drum kit for 'On The Run' instead of anticipating the whole glitch movement in electronica by 20 years. Or imagine the Art Of Noise using an open hi-hat for the intro of 'Close To The Edit', instead of a VW starter motor! Of course, there are countless examples of innovative percussion sounds in electronic music; it's what defines the genre!

Out in the real world, at gigs, drum kits are seriously bad news. Drums are too loud and frequency-wide to allow any nuance of interesting electronics through. So-called 'electro' bands who use drum kits should be ashamed. These are the sort of electro outfits that also have bass guitars and electric guitars. Well, I'm sorry, that's not electro, that's rock. I don't care if you do have a laptop on stage adding a tinny percussion track or providing a synth sound for the keyboards, you're doing rock. It looks like rock, it sounds like rock, and it sucks like rock.

The process of manipulating recordings of real drums and experimenting with drum machines extends the possibilities of sound and music, and has itself generated countless scenes and genres. Where would drum & bass be without the 'Amen' break? Or disco without the cheesy cowbell and toms? Or techno without the 909 kick? Or Chicago house without that 808 handclap?

Even just being able to program drums in a style that's faster and more intricate than a human can play is enough to create entire sub-genres of furious hardcore and breakbeat. Squarepusher, I'm talking to you!

For proof that drum kits are limited by what the human can play, why not search for 'Monkey Drummer' by Aphex Twin on YouTube, for a demonstration of what it would take a human (or monkey) to play even a simple piece of acid-techno.

If this is all true (and it is) you may be asking: 'why, then, has the music technology industry worked so hard to replicate the sound of the drum kit for us lucky electronic musicians all these years?' And it would be a fair question. But have you ever actually compared the sound of a Linn drum machine or a TR606 with a real drum?

We've been very polite over the years, but let's face it, no drum machines ever really sounded anything like the real thing; they simply provided an approximate bass thud for a kick, a splash of white noise for the snare and crash, and a plunk of discordant metal for that well known item of drum kit, the cowbell. Realistic? No. Inspiring sources of rhythmic sonic impulse? Definitely!

Drum kits are lovely things, and they have, without a doubt, helped shape the popular music of the 20th Century. But we have to realise that it is now the 21st Century and we have loads of electro to create and celebrate. I'd like to proceed without the curse of the drum kit, thanks very much!