Building a home studio is not just about choosing the right gear. The real challenge is making it fit in with the décor. And keeping hold of your wife/husband...

When I first met my husband Mike, he was a music student. He had countless tapes and CDs and even more books of sheet music. Most of it was classical, but there was also some pop: The Beatles, The Police — mainstream stuff. I liked that. I wasn't exactly a music buff myself, so his CDs were comfortingly familiar, and songs like 'Whiter Shade of Pale' were part of the soundtrack to our first summer. 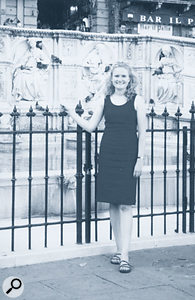 But then slowly, almost imperceptibly at first, things began to change. It started with the purchase of a brand-new Roland VS880; quite an unassuming little machine you might say. After all, it can't be much more than 50 x 30 x 10cm, so it doesn't really take up much room. But what most of you won't realise and what Roland most certainly don't tell you in their manual is that this little machine has an amazing ability to breed. Plug in a microphone lead and in less than nine months — much less in fact, the gestation period is sensationally brief — you'll have a Korg Prophecy. And a Yamaha QY700. And... it goes on and on and on. Frankly, if I had a pair of shoes for every piece of kit my husband owns, Imelda Marcos would eat her heart out.

I suppose I wouldn't mind so much about the space all this stuff takes up, if your standard piece of hi-tech music gear was prettier to look at. I mean, really, who designs all this kit? Pasty-faced, spotty geeks in faded Star Trek T-shirts, that's who. These machines may be technical wonders on the inside, but on the outside they all just look like black boxes with knobs on. Now, some people think that this general level of non-design is a good thing. A while ago Mike came home with a pair of absolutely enormous black speakers and proceeded to fix them onto even bigger black stands with spikes that went right through the living-room floor. When I dared to protest at this new intrusion into my personal space, he merely shrugged and said, "You should be glad they aren't fluorescent orange". He had a point. But surely a bit more design wouldn't go amiss? Or is there a law that anything that sounds good can't be visually pleasing?

There are some exceptions. Not many. But I'll tell you about one of them. My favourite piece of kit is the Behringer V-Amp. This isn't because I think it creates a particularly good sound or is exceptionally easy to use. I've never used it and certainly have no intention of doing so. In fact, I don't even know what it does and I couldn't care less. I like it for two, very simple reasons: it's got an interesting shape — curvy rather than square — and it's blue. This means it matches our curtains and the throw on the sofa. So, on good days, I can kid myself into thinking that I have at least some control over the colour scheme in our living room, which, of course, I don't. The latest decorative addition is some grey acoustic foam, huge panels of the stuff which my husband puts up not only on the wall, but also all over the window. The effect is truly stunning. It feels like living in a dark padded cell.

But it's not just the visual impact of having a music studio in my living room that I object to. After all, the main thing about sound recording is, well, sound. And once you've heard a sound a couple of times too often, it gets irritating. It turns into noise. No, I'm not a grumpy old bat. I do actually quite like the music my husband makes. In moderation. And played at a level that doesn't give me tinnitus!

However, this is rarely the way I hear it. It wasn't too bad when he was still recording the stuff, because even he realised that I would draw the line at turning the kitchen into a control room, and so he went elsewhere to do it. But now he's recorded it and synthesized it and effectised it and done whatever else you lot do, now it's mixing time. And this means playing the same few bars over and over again at full blast. Of course, he says they're not the same few bars. Each time they're subtly different, apparently. But try as I might, I can't hear the difference.

It's not only driving me mad, it's driving me from my own home. If my husband wants to turn the flat into one giant asylum, grey padding and all, he's got to do it without me. A woman has to keep her sanity one way or another, and shopping is a great healer. There's very little a pair of strappy heels can't fix. Unfortunately, though, most shops tend to close at a reasonable hour, way before he would even contemplate wrapping up a mixing session. Lately, I've found myself seeking asylum at my girlfriends' houses of an evening. That's not such a bad thing, mind. They're great, my girlfriends. They ply me with wine and tell me I'm a saint for putting up with it all. In fact, they say it so often I've started believing it myself. Being a saint is rather nice in a self-righteous sort of way. So I suppose studio widowhood does have its perks. And, as my mother reminds me, I do have reason to be thankful. After all, he could be going down the pub with the lads every night. But if you should hear of a three-bedroom house in Cambridge with a large garden and a shed-cum-studio at the bottom of said garden, do let me know. It might be the one way of saving our marriage!

Dr Ute Stock specialises in Russian literature. And shoes. Not necessarily in that order. She is also the long-suffering wife of Mike Senior, SOS Reviews Editor and music maniac.

Mastering Essentials Part 3 - How loud should I master?
12 hours 38 min ago.