Once installed, this little flute library, created by producer Eduardo Tarilonte and flautist Carlos Soto, comprises around 470MB of samples. The main keyswitched instrument has been chromatically multisampled, both for sustained playing and for three types of staccato. In each case, you get four samples, and a built‑in Kontakt script steps either randomly or sequentially through these as you play, to introduce some natural variation. 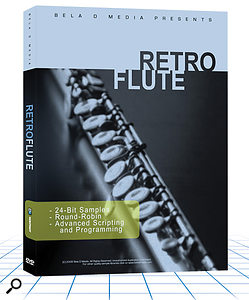 However, there appears to be only one velocity layer per note, which is a shame because the flute's tone is deliciously earthy, and it'd be great if that changed more realistically with your playing dynamics. Set against this, however, is that you do get quite a lot of articulation control. For a start you get a choice of sustains: vibrato, non‑vibrato, flutter‑tongue and sung notes. Other flourishes are also on offer, including whole/half‑step trills and half‑step mordents. Extra flexibility comes via a system that allows you to overlay the different staccato samples over the sustained ones, which is a surprisingly effective strategy for altering the performance stress of individual notes. I missed a patch with looped sustains, though, especially as most of the sustain samples only last around five seconds and the sung notes drop off after less than two seconds. This isn't a 'running out of breath' issue either, because some of the trills last almost 10 seconds.

You can choose to have breath and mechanical noises added to your performance automatically, via a special Kontakt script. On the face of it, these should aid realism but, in practice, I found the scripted allocation a bit arbitrary, coping well enough with longer legato lines but quickly sounding odd with shorter notes. The key clicks also get quieter as you play notes more softly, which isn't very authentic. Fortunately, you can wrest control of these noises from the scripting and trigger them manually, if you prefer. I'd still have liked some slower breaths, though, for the starts of more languid phrases.

As is common to a number of multisampled libraries, the mod wheel crossfades between non‑vibrato and vibrato samples but, unfortunately, there's ugly zipper noise to contend with, which is enough to give away your controller changes if the track is in any way exposed in the mix, as solos tend to be. A special patch allows you to use Kontakt's internal Time Machine to adapt things like mordent and trill speeds to the tempo of your track. Extending the sustained notes is possible in this mode too, but the time‑stretching artifacts and reduced vibrato rate will give this away pretty quickly if you try to push things beyond about 15 percent slower.

So, overall, if you like the basic tone and articulation opportunities you can hear showcased on the on‑line demos, but don't need too much in the way of slow, fluid expressiveness for sparser textures, this library represents fairly solid value for money. Mike Senior