Eduardo Tarilonte's sample libraries from Best Service now feature regularly in Hollywood film soundtracks, documentaries, video games and album releases, and it's not hard to see why. With evocative, yet carefully targeted titles such as Epic World, Forest Kingdom and Desert Winds, they rarely disappoint the listener, largely because of their atmospheric sounds, incredible attention to detail and downright playability. 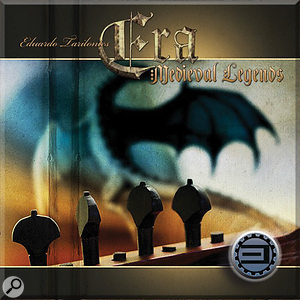 Era: Medieval Legends goes further than ever before, with its 10GB collection of over 11,000 24-bit samples focusing on knights of old, fair princesses and dragons. Despite its many fantasy sound-design elements, including over a hundred atmospheric soundscapes, atmospheres and incidental effects (preset names such as Dead Village, Before The Battle and Evil Magic instantly set the scene), Era also has at its heart a wonderful and most realistic collection of 45 medieval wind, string and percussion instruments that simply ooze character, each featuring deep sampling, round-robin variations and real legato and portato (carried) phrasing.

The GUI, once again, looks gorgeous, this time based on a highly stylised medieval manuscript with extensive metal embellishments, although I do think the graphic designer has sacrificed some clarity in the process, as the cursive-script control labels are sometimes tricky to read. Fortunately, once you load in any of these instruments, they are so expressive and easy to play that any GUI niggles are forgotten.

The wind section starts with a quartet of renaissance recorders (soprano, alto, tenor and bass), supplemented by a traditional soprano recorder and wooden flute, and a gemshorn (similar to the ocarina in tone). The default legato mode incorporates both smooth portato phrasing and legato at higher MIDI velocities, while keyswitching lets you flip from these to staccato, mordent or trill modes. Since early wind instruments have a tendency to sound more strident in the upper registers, there's also a dynamic curve correction option that adds a little compression at the top end, and while vibrato isn't a feature of medieval playing, that's also available as an option. This wonderful level of detail sets the trend for the remainder of the wind section, switching to reeds and offering stirring bagpipes, a strident crumhorn consort, shawms and a selection of war horns, including chromatic notes and phrases.

The bowed and plucked strings exude wiry character, offering bass viola da gamba, fiddle, a set of hurdy gurdy grooves, baroque guitar and renaissance lute, along with several harps, zither and psaltery. The somewhat smaller key section comprises the portable hand-pumped organetto, virginal and 3.5-octave spinet (let's face it, there weren't many keyboards around in the middle ages!). Meanwhile, the percussion section focuses on various resonant frame and hand drums, snares (I loved the execution snare!), tambourine flourishes and some wonderful, and somewhat ancient, church bells that have been chromatically stretched across the keyboard, played in peals, and even include a separate flight of startled pigeons for added realism. For me, the strength of Tarilonte's libraries is that all their round-robin and phrasing complexity is taken care of under the surface, so playing Era: Medieval Legends expressively becomes a real pleasure. Highly recommended! Martin Walker