A ribbon mic that can be used on a kick drum? Prepare to believe, as the new 'Roswellite' ribbon shows off its hardiness. 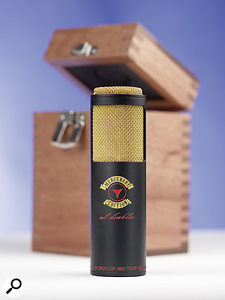 Crowley & Tripp's reputation as a manufacturer of high-quality ribbon microphones grows with each new model release, but the latest offering, the El Diablo, really does raise the bar. Launched in October last year at the 123rd AES Convention in New York, the El Diablo is the first model to use the company's intriguing new ribbon material, which they have amusingly labelled 'Roswellite'.

There are two versions of the El Diablo: a standard model with a stainless-steel casing and silver grille (matching other Crowley & Tripp ribbon mics such as the Studio Vocalist and Proscenium), and the Mercenary Edition, which features a much more devilish black-painted casing with a gold grille. Other than the casing, the two models are identical and cost the same, so it's just a case of deciding which finish you prefer. The El Diablo is supplied in a smart wooden box, with a familiar-looking suspension mount, using a spring-arm-tensioned collar arrangement to support the mic firmly in place, and also comes with a cute little mascot on a chain! All of the Crowley & Tripp ribbon microphones are built by hand in America at the company's facility in Ashland, Massachusetts.

Apparently it took over a year to develop the El Diablo, and Fletcher of Mercenary Audio in the US had a hand in guiding the mic's sound character — hence the Mercenary Edition. He asked for the attack of a Sennheiser MD421 inside the drum combined with the weight of a Neumann U47 FET outside. So Bob Crowley and Hugh Tripp duly strove to engineer that character into the El Diablo (but with the significant advantage of not having to worry about phasing problems between two separate mics). Surprisingly, there are barely any published specifications for this mic anywhere!

With a claimed maximum SPL figure of a whopping 146dB, this Roswellite ribbon is clearly exceptionally strong and robust, but don't assume that means heavy and dull. I was surprised, but very pleased, to find that it still has all the delicacy and subtlety of a traditional aluminium ribbon. The frequency response is very flat between 40Hz and 12kHz, falling progressively at the extremes and with a notable peak centred at 4-5kHz. At distances of more than about 10 inches the El Diablo can sound a little bass shy, but with its impressive SPL capabilities I suspect close mic placement will be the order of the day — in which case the inherent proximity effect will bolster the bass end very nicely.

The El Diablo sounds very controlled and clean, if a little forward, and provides a surprisingly strong output level for a ribbon mic, thanks to its internal custom-wound step-up transformer. The output level is actually similar to that of a Shure SM57 placed alongside. This means it will deliver good results on gentle vocals and solo acoustic instruments when using typical preamps, just as it will in front of kick drums, hot brass sections or guitar amps cranked up to 11. You don't need specialist high-end mic preamps to capture reasonable results with this mic.

The polar response is a classic figure-of-eight with the characteristic (and immensely useful) deep side nulls. A lot of modern ribbon mics are deliberately tailored with different tonalities front and back, providing a bright side and a dark side to increase versatility. However, the El Diablo boasts a true symmetrical pattern with an identical tone both sides that can be used just as creatively. You could, for example, arrange a brass section with a player (or two) on each side of the one mic to great effect. It also allows you to use this mic as the side element of an M/S stereo pair.

Close Encounters Of The Ribbon Kind

The true nature of the Roswellite ribbon material used in the El Diablo is a closely guarded secret, but Crowley & Tripp have said that it's "a new class of advanced materials called 'Supermatter', which is engineered with nano-scaled structures that provide incredible strength and durability". Furthermore, apparently it "retains a memory for its original shape" that enables it to survive high-SPL applications such as miking kick drums. Yes, you did read that right — this is a ribbon that you can safely use to mic a kick drum! (See main text.) Not only can Roswellite handle high SPLs, it isn't bothered by wind blasts or phantom power and it won't sag or stretch, as traditional aluminium foil ribbons tend to, either. Interestingly, Crowley & Tripp have recently also introduced the Roswellite ribbon material to their Naked Eye model too. That Area 51 alien technology is such a godsend...

I initially set up the El Diablo as a vocal mic, just to get an idea of its tonality, and hooked up the output to my favourite AEA TRP preamp. This is a high-end, specialist preamp specifically designed for ribbon mics. It has a lot of gain and a very clean DC-coupled signal path, and its unusually high input impedance of around 18kΩ suits ribbon mics particularly well. 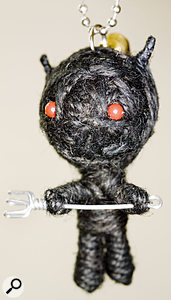 An unexpected extra: the El Diablo's toy namesake... The first thing that became painfully obvious was that I didn't need a lot of gain! The magnetic motor assembly in the El Diablo is clearly very efficient and the output is remarkably strong. The second thing I noticed was that, despite a dual-layer wire-mesh grille, spaced well away from the ribbon inside, close vocal plosives could still cause occasional popping. While there's no risk of damaging the ribbon, popping is clearly undesirable from a sound quality point of view, so a separate pop shield is certainly a good idea if you plan to use the mic for close, intimate vocals.

I used the El Diablo with a variety of mic preamps, including a Focusrite ISA 428 and a little Mackie VLZ mixer — both of which delivered excellent results. Being able to select a high input impedance (as you can on the ISA 428) is a useful facility with this mic, as the sound seemed to fill out a little and became more natural through the mid-range with the ISA's 5kΩ setting, as compared to the conventional 1.2kΩ option.

The lowish presence peak at around 4kHz helped the sound to cut through in a mix, without becoming pushy or strident, and could be balanced nicely against the bass end by varying the mic position slightly to control the proximity bass lift. One of the nicest aspects of traditional ribbon mics is the complete absence of the almost inherent HF resonance coloration associated with condenser mics (especially large-diaphragm models). Instead, aluminium ribbons tend to resonate at ultra-low frequencies, and I'm pleased to report that Roswellite shares the same character, which gives a very natural, smooth quality despite the relatively early HF roll-off. 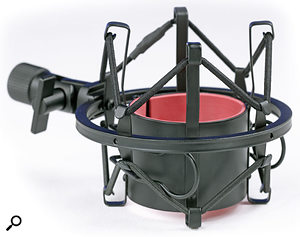 Included with the mic is this elastic-suspension shockmount.Feeling brave after the vocal performance, I placed the El Diablo directly in front of the bell of an alto flugelhorn, and (once I had reduced the preamp gain to a more sensible level!) I was impressed with the depth and detail of the sound it captured. Ribbons always make a good choice when it comes to brass, usually capturing a crisp, detailed sound without harshness. The El Diablo certainly didn't disappoint.

Next up was a Fender Frontman guitar amp, and the generous SPL its player produced didn't trouble this Crowley & Tripp mic at all. I was interested in its susceptibility to induced hum, though, because this is a common problem with ribbon mics. The internal output transformer in most ribbons often suffers interference from the stray magnetic fields of mains transformers, so it pays to keep ribbon mics as far away from power-amp transformers as possible, although sometimes this is easier said than done. I found the El Diablo to be better than many at rejecting magnetic interference, but placement close to a large mains transformer certainly did induce noticeable hum. Rotating and/or angling the mic reduced (or increased) the hum dramatically, but pulling the mic back from the sound source a few inches removed the interference completely — so it's quite a manageable side-effect, provided you take the trouble to listen and experiment with positioning.

Finally, I girded the loins and rigged the El Diablo just inside the kick drum of a friend's studio practice kit. I had expected to lose the output to a ruptured ribbon after the first few bars, but the mic just carried on. The El Diablo was completely at home with the immense pressure waves coming from the kick. And I have to say that the tonality is spot-on — it really does have a lot of the character that Fletcher requested. There is a lovely crisp attack, coupled with a lot of low-down weight and body, all perfectly balanced in a homogenous kick-drum sound. Astonishing!

Overall, then, the El Diablo is a seriously impressive mic — all the more so for being a ribbon model. The Mercenary Edition looks great, it's extremely robust and its unusually high output level enables it to be used with 'ordinary' preamps. The sound character is typically smooth, detailed and natural, like most other ribbons — but without the fear of damage you can be far more adventurous in using this mic.

The down side is that it isn't exactly bargain basement. In fact, it's the most expensive mic in the Crowley & Tripp catalogue, and a lot of very well-respected and serious high-end capacitor mics cost less! It costs roughly a third more than the Soundstage Image, the Proscenium and the Studio Vocalist, it's almost twice the price of the Naked Eye Roswellite (see the 'Close Encounters' box), and you could even buy a Naked Eye Classic and the complete Recordist Ensemble stereo kit for the same money. So you'd really have to want this mic!

Having said all that, I'm quite sure a lot of people will want one, simply because I've not come across anything that even gets close to this unique blend of ribbon sonic character and capacitor reliability. In short, this is a fantastic evolution in ribbon-mic design.

Nothing else can do what this mic does!

A remarkable ribbon mic design using a proprietary new diaphragm material that appears to make the El Diablo all but indestructible without sacrificing the delicate character of the ribbon.