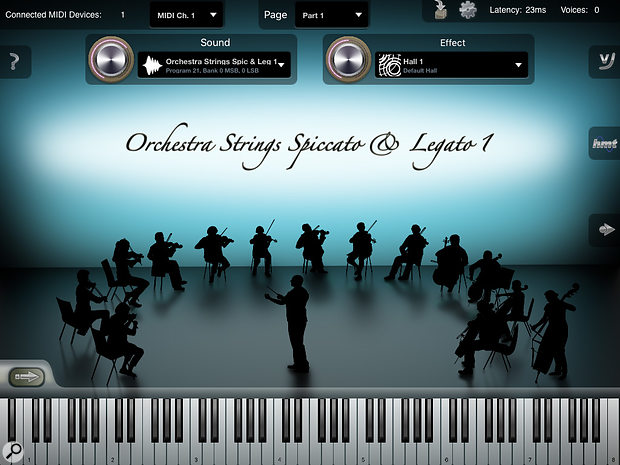 Crudebyte’s iSymphonic Orchestra is an ambitious attempt to pack a full orchestral sample library into an iOS device. It comes bundled with a basic set of samples that can be expanded by adding packs for brass, choir, woodwind and the like. All the sounds were recorded for the purpose under the supervision of sound designer Kurt Ader, who’s been crafting commercial samples ever since the Emax hit the shelves.

The interface is smartly presented, the main screen featuring a keyboard that can be resized using pinch-zoom, along with drop-down menus for sounds and reverbs. As well as showing the basic sound set, the browser also lists every sound available from the nine optional expansion packs, distinguished by icon. You’re prompted to purchase these if you select one that isn’t currently installed.

The abundance of orchestral libraries guzzling acres of RAM and disk space on desktop PCs has set high expectations for sonic range and quality, but the choice currently available in app format is far more limited, not least because of the price of memory for an iPad or iPhone. Given the limitations, the instruments on offer here are perfectly acceptable. With a splash of reverb, some of the string patches have an agreeable warmth and fullness.

The basic set includes 25 sounds consisting mainly of strings, with up to four variations on each type, leaving only a handful of slots for the rest of the orchestra. This seems a little skimpy, and I would have preferred to see a wider palette available from the get-go. As it is, it won’t be long before the serious arranger needs some of the additional packs. Each of these offers around 15-20 new sounds at £8.99$11.99 a pop.

One of the interesting features of this app is support for Hermode Tuning or HMT. This is a system for adjusting the tuning of notes within a chord in real time according to their harmonic context, to counterbalance the compromise of equal temperament. The result is a subtle sweetening of the chord such as can be achieved by orchestral players. HMT has been knocking around for some time as an option within synths such as the Waldorf Microwave or Access Virus, as well as appearing in DAWs such as Cubase and Logic, and its inclusion here is a welcome addition.

Other aspects of the app include a velocity response curve which can be adjusted by dragging a finger, and a simple sequencer. The latter seems a little superfluous as it offers only basic functionality, and you’re more likely to want to use a third-party alternative such as Cubasis (Audiobus and IAA are supported). But it’s there if you need it.

iSymphonic Orchestra doesn’t currently have many direct competitors, though the closest thing to it would perhaps be IK Multimedia’s Sampletank for iPad combined with the Miroslav Philharmonik set. And whilst the price has been dropped, by the time you’ve added a few expansion packs to give the string section some more people to play with, it still represents quite a sizeable financial investment in app terms. But the attention to detail is commendable, and if you’re in the market for a pocket-sized orchestra, it’s well worth checking out.