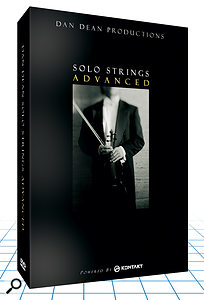 Presets are presented in three groups. 'All‑In‑One' offers the same six articulations as previous libraries (Arco vibrato, Spiccato, Pizzicato, Tremolo, Half and Whole Step trills), all available via keyswitching, but the Spiccato and Pizzicato now feature auto‑alternation of two 'takes' for greater realism, and the new sustain‑pedal-driven legato mode provides shorter attacks for smoother real‑time performance of fast passages (one of my few grumbles with the original).

With 'Voice Control — Divisi', each preset provides a single articulation, but the keyswitching (or the mod wheel) controls the number of players. Unlike the huge gulf between the solo and ensemble choices offered by most string libraries, SSA lets you change on a note‑by‑note basis between solo player, three‑instrument, and six‑instrument ensemble in the case of cellos or violas. For violins, you get an even more ambitious selection, courtesy of a new set of 2nd violin samples, with solo, two first plus one second, three first, three of each, six first, or six of each. This range offers unprecedented real‑time control, and for even greater realism you can activate the 'Cloaking Device', which performs subtle trickery with alternate samples and other note characteristics, so that each note sounds slightly different.

In the case of the first two preset groups, you can also control real‑time dynamics via the mod wheel, or breath, or expression controllers, and release time from MIDI Continuous Controller 20. The 'Legacy' presets are simpler, offering one articulation each, with no keyswitching. They revert to the normal sustain‑pedal function, but still offer attack and release tweaks: ideal if you plan to ignore the manual!

All presets now benefit from 26 specially selected convolution reverb impulses, ranging from a very small room to a large symphony hall, so your acoustic options are extremely flexible.

The Timbral Impulses are intriguing: they let you remove the resonant character of the original recorded strings and replace it with one of 24 different 'sonic fingerprints', captured from recordings ranging from live classical performances to famous pop songs. These offer great tonal flexibility, ranging from smooth and dark to thin and wiry. Names are cryptic, but I'd bet '03 ER' is Eleanor Rigby!

While it doesn't offer velocity‑switched layers, SSA more than compensates with its unique divisi and timbral impulse features, which make it an inspiring and extremely versatile real‑time 'instrument'. SSA can only enhance the enviable reputation earned by the earlier version of this library. Martin Walker