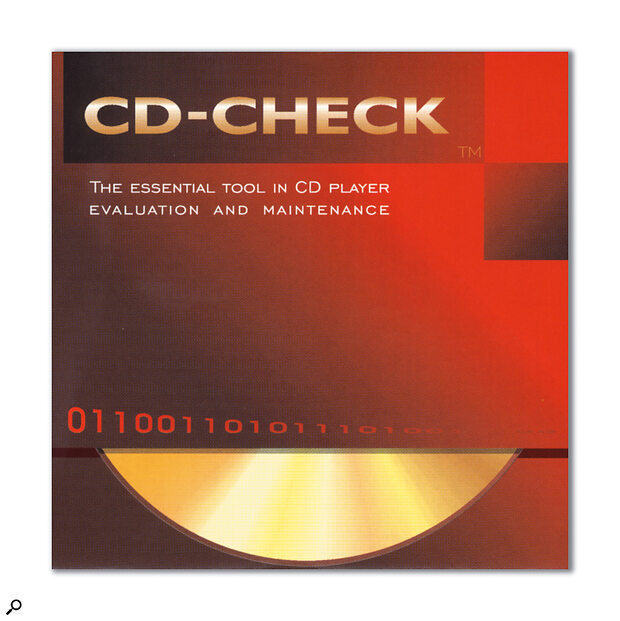 Many recording musicians working on a budget, and without a computer, often turn to a stand‑alone CD writer as their master recorder. In such an application, the ability of the player to handle burst errors from scratches or grime on the surface of the CD medium will be very important if archived tracks and parts are to be faithfully restored. Small errors can be easy to miss in a complex recorded mix until it's too late, especially when listening back over a limited‑range speaker system. As a result, it is useful to be able to measure how resistant a given CD player is to errors in the playback data stream.

This is where the CD‑Check can help out. It is manufactured by the Canadian company Digital Recordings, and is itself an audio CD. It contains an introductory vocal explanation of the simple testing procedure and then a set of five tones at around 200Hz, each lasting 20 seconds and separated from the next by a period of silence lasting 15 minutes. The tones are faded in and out to prevent any inherent clicks in the audio.

So far, so ordinary. However, a glance at the underside of the CD shows the difference between this CD and a normal one. Wafer‑thin strips of black plastic have been stuck to the underside of the disc, such that they introduce burst errors into each of the tones, with the exception of the first, four times per revolution of the disc. The width of each of these strips of plastic has been carefully measured to introduce a specific size of burst error, and the strips get progressively wider from the second tone to the fifth. The best CD players can correct for even the largest of these errors, providing flawless playback of the tones without any audio clicks. However, I found no such player during the review period, with even the best players failing to correct the errors in the final tone.

What was interesting was that the CD‑Check CD revealed that the quality of error correction often fails to correlate with the perceived quality of the player. For a start, the cheapo CD ghettoblaster in my kitchen outdid my first‑generation stand‑alone Philips CD‑RW. What's more, a hand‑held portable CD player, which I find often copes with scratched CDs other players reject, failed only on the fifth track, equalling the performance of a recent professional Tascam CD‑RW machine.

This is exactly the sort of information that musicians on a budget, and therefore without dedicated test equipment, are usually denied, and it is a credit to the Digital Recording product designers that they have been able to come up with such a simple, yet revealing, test product at such a low price. If you rely on CD recorders and players for serious recording work then the CD‑Check CD is an almost essential purchase.