DOD's Phasor 201 was one of the first commercial phaser pedals, and as with most others that emerged around that time, it essentially comprised two cascaded RC (resistor-capacitor) phase-shift stages. FETs were employed as variable-resistance devices, and these were controlled by a low-frequency oscillator. The controls are very simple indeed: there's one knob to govern the speed of the effect — and that's it!

This new version is pretty much the same as the original, except that it has a blue status LED and an external 9V input socket, to make it easier to add this device to your pedalboard. It can still be powered by a 9V battery, the compartment for which is accessed by removing the bottom panel. The new version also includes a true hard-bypass switch, so when you're not using the pedal, its circuitry is not in your signal path, and is thus not compromising your tone. The case on this latest model is a lighter aluminium one than that of the original, and is finished with a blue metallic flake paint, but, importantly, it still creates the same old-school phasing effect that its namesake did some 40 years ago.

What I like about the DOD design is that it has very little effect on a signal's low frequencies, with all the whooshing and swooshing affecting mainly the mids and highs — and that means your guitar sound remains solid and stable, despite the obvious effect. Lower speeds give you the classic Pink Floyd 'Breathe' style of fluid phasing, while at fast settings the effect is almost like a rotary speaker. There are no significant pops and bangs when switching the effect in or out, the speed range is gratifyingly wide and the circuitry is adequately quiet. The years have been kind to this circuit, and it was definitely worth bringing it back.

Also back from the dead is the analogue DOD Overdrive Preamp 250. Again, this offers true bypass-switching and a status LED, and has the same lightweight painted casework and power connector as the phaser, but this time in a yellow-gold metallic finish. Like the Phasor 201, the DOD 250s innards remain true to the original circuit. Its two control knobs govern the gain and output level — it couldn't be simpler.

Inside the box the circuitry is just as simple, and is very close indeed to that of the equally ancient MXR Distortion Plus. A single and far-from-exotic op amp chip provides the gain, and this feeds the signal into a pair of germanium diodes, one in each polarity, to produce progressive clipping. Germanium diodes become increasingly non-linear in response to increases in level, and finally clip when the signal voltage exceeds 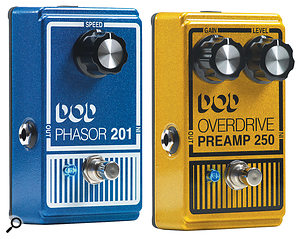 approximately 0.2 volts (as opposed to the 0.6V threshold and slightly less-cuddly non-linear curve of a silicon diode). That means the maximum peak-to-peak signal is a little under half a volt before it hits the output-level control.

How the pedal sounds depends very much on how you set it and what amplifier you use it with. At low-gain, high-level settings it works well as an almost clean booster that has little effect on the guitar's original tone — ideal for 'pushing' valve-amp front ends. At higher gain settings the pedal works well in feeding an amp that's already close to overdriving, as it adds a nice thickness and extra sustain to the sound without getting too rough. Run at high gain into a clean amp and the sound takes on a raspy edge that I'd describe as 'overdrive meets fuzz box' but, again, that has it uses. So, if you liked the originals, you'll love both these reissues as the designers have resisted the temptation to tinker with something that already works. Paul White