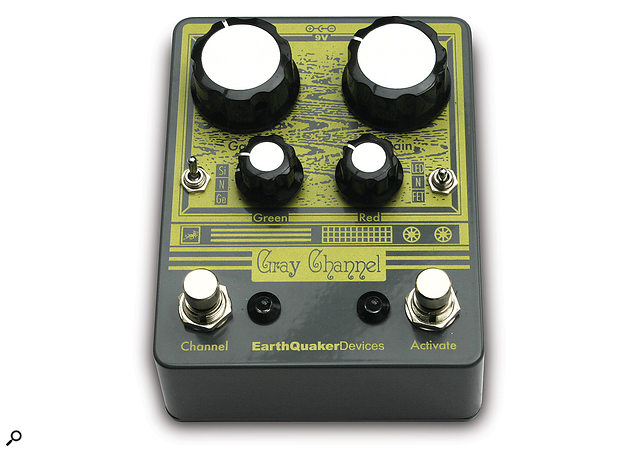 Overdrive pedals create distortion in different ways. Many use diodes, with a choice of germanium or silicon, some use FETs, others LEDs. Some just thrash the transistors or op-amps and let them clip naturally. EarthQuaker Devices, though, have really hedged their bets with their Gray Channel, as each of its two overdrive channels offers a choice of three clipping types. Both the Green and Red channels have their own gain and output knobs, while the Green channel can be switched between silicon and germanium clipping diodes (or no diodes at all), and the Red channel can be switched between LED and FET clipping circuits (again with a ‘none’ option too).

As a rule, germanium diodes produce the smoothest sound and have a lower output due to their lower ‘turn-on’ voltage, which is typically less than half that of a silicon diode. Allowing the op-amps to clip with no diodes in place usually gives a harsher and louder, more fuzz-like sound but with more headroom, while silicon diodes inhabit the middle ground. LEDs and FETs can produce more valve-like distortion with the FET sound being more compressed than that of the LEDs. Power comes from an optional external 9V (Boss-compatible) PSU or a standard 9V battery.

The idea behind all this choice is that you can use one pedal to set up maybe a mild boost and the other a full-on rock solo sound, each customised to your personal taste, by selecting the best clipping type. There’s no EQ as there is with some overdrive pedals; in my experience the EQ on such pedals usually ends up set close to its neutral setting anyway but, still, some EQ would have been welcome here.

The only controls for each of the two channels are the large gain knob, a smaller volume control plus the three-way slide switch to select the clipping type, with ‘none’ being in the centre position. The right-most footswitch has a white power-on LED and acts as an overall hard bypass. The left switch flips between the red and green channels, with its status LED changing colour appropriately.

In use, the gain control setting required to bring on the desired degree of distortion varies quite a lot depending on which type of clipping you choose, but there’s plenty of volume control range to balance things up. To my ears the FET overdrive option sounds the most amp-like and the ‘none’ setting the most coarse, but then everybody has a different ideal sound. The whole point here is that you get to choose your favourite flavour of clipping type rather than having to settle for what you’re given.

In all modes there seems to be a subtle shaving of the highs and maybe a touch of mid boost to help polish up the overdrive sound, but not to the same degree that, for example, typical Tube Screamer clones exhibit. The muse for the Gray Channel was apparently the DOD 250, and I’d describe the overall drive character as slightly harder-edged than many of the overdrives I’ve tried. The differences between the clipping types are clearly audible, though, so this approach is definitely valid and the dual format also preserves pedalboard space.