In designing the Blurst, Electro-Harmonix (EHX) have essentially built a synth-style resonant, fourth-order, low-pass filter and put it into a guitar/bass pedal. The filter frequency can be controlled by a multi-waveform (triangle, rising sawtooth and falling sawtooth) LFO, or an external expression pedal. An EHX 9.6V DC adaptor is included, though any Boss-compatible power source capable of supplying over 100mA can be used. 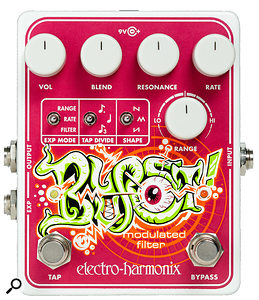 The modulation speed is adjusted using the top-panel Rate knob, or via the Tap footswitch in conjunction with the Tap Divide toggle switch (there’s a choice of quarter, dotted-eighth and triplet rhythms, which relate to the tempo you’ve tapped in). Should you have an external expression pedal, you can use it to control the sweep range, LFO rate and filter frequency. For the benefit of modular-synth enthusiasts, the pedal input can also accept control voltages in the 0-5 V range, including the output from EHX’s own eight-step Program Analog Expression/CV Sequencer.

As you’d expect, the control setup is fairly straightforward, with five knobs and three switches positioned above the ‘entrails and eyeball’ Blurst graphic. Volume does just what it says, while Blend sets the wet/dry mix. Resonance sets how peaky the filter sounds, while Range simultaneously adjusts both the filter frequency and the frequency range over which the filter is modulated. Maximum range is with the knob in the middle, with a focus on lower frequencies left of centre and higher frequencies to the right. Rate sets the LFO speed, though this can also be set via the Tap facility or an external input.

Those three toggle switches, all of which are three-position types, cover Exp Mode, Tap Divide and Shape. Exp Mode selects whether an external pedal or CV input controls the Range, Rate or Filter frequency. Tap Divide sets the modulation rate relative to the tapped in tempo, while Shape picks one of the three modulation waveforms mentioned earlier. Both footswitches have status LEDs. The one on the left is used for tempo tapping, and the other for activating bypass. Metal jacks are used for the inputs and outputs, and to accept an expression pedal input.

One thing that the Blurst doesn’t feature is an input-triggered filter sweep option, despite other EHX pedals being able to perform that trick — its addition here would have made the Blurst more versatile.

If you simply use the Blurst to generate extreme filter sweeps, the novelty will soon wear off, but it offers a wider palette than that: by juggling the Blend, Resonance and Range controls while using the triangle wave as a modulation source, you can dial back the effect to make it sound surprisingly subtle. For example, at lower mod rates you can set up an effect that provides a similar result to a phaser or vibe-style pedal but with less extreme tonal changes, simply by reducing the resonance and blending in more dry sound. At higher rates you can use the effect as an alternative to a tremolo or even a rotary speaker effect, for which the Blend functions a little like a depth control.

Adding external control gives you the option of creating real-time dynamic effects — you can have drastically changing mod rates on the fly, for example — so there’s something for everybody here. My preference is for the more subtle effects but if you need speaker-punishing throbs or slow, very resonant sweeps, you can have them. It’s a fun box and no mistake! Yes there are other filter pedals out there from many of the big names in stompbox design but, as they so often do, EHX have come up with a format all of their own.