Electro-Harmonix’s Mel9 guitar effects pedal, which must qualify as their most ambitious model so far, produces a range of instantly recognisable Mellotron sounds.

Following on from their B9, C9 and Key9 pedals comes Electro-Harmonix’s Mel9, which must qualify as the most ambitious of the bunch. It has the same case and control layout as the other pedals and works in a similar way. As far as I can tell, in all these ‘transformative’ EHX pedals, the sounds always start life as waveforms taken from the guitar strings, but some clever polyphonic pitch-tracking filters combine with pitch-shifting to allow both single notes and chords to be processed in real time to make them sound, in the case of the B9 and C9, like electronic organs or, in the case of the Key9, like electric pianos. The Mel9, of course, takes on a range of instantly recognisable Mellotron sounds. 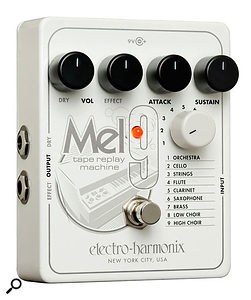 The Attack control governs the rate of attack of the note and Sustain allows it to linger on for a short while after you end the note, to smoothen chord changes. The only deviation from this is when playing the Brass patch, in which case the Attack control adjusts a dynamic filter and Sustain imparts a ‘parpy’ lip noise to the sound. As with the other pedals in the series, there are separate outputs for the dry and effected sounds, though plugging into only the effect output gives a mix of both wet and dry sounds, each with its own level control.

You can use the pedal right out of the box but it needs a strong signal (which means keeping the guitar volume turned up full) to keep it happy, and it’s extremely sensitive to picking dynamics, so unless you are a very precise player, the note levels can seem very uneven. I found this to some extent with the other pedals in the series, and discovered a simple fix: just put a compressor pedal in front of it. I had an EHX Soul Preacher lying around and it did the job perfectly — which makes me wonder why they didn’t incorporate compression in the pedal. It might hike the price slightly but it would be worth it in my view; it might even help them sell more, as it would make the pedals more user-friendly when being tried out in a music store!

The Sustain control works well up to around halfway on the control, after which it starts to sound very ‘reverby’ so I’m guessing some sort of reverb engine is used to create the sustain.

The sounds on offer are Orchestra, Cello, Strings, Flute, Clarinet, Saxophone, Brass, Low Choir and High Choir, of which more shortly. Orchestral reproduces that characteristic ‘Hall Of The Crimson King’ sound with almost frightening accuracy, to the point you can almost hear the tapes shedding oxide and stretching. Next is Cello, which sounds convincing enough, then there’s a generic String sound that again works fine. Flute delivers the ‘Strawberry Fields’/’Nights In White Satin’ tonality, while the Clarinet and Sax are, just like the originals, recognisable but not up there with today’s multi-samples; old-world charm is most definitely the aim here. Brass conjures up a believable ‘Bus Fare For The Common Man’ sound, and can also be softened to work as a pad, while the two Choirs are again very close to the originals, complete with warbly vibrato.

If you need these sounds and don’t want to mess around with special guitars or pickups, the Mel9 will fool most people into thinking they’re hearing a real Mellotron when used in a live performance. But do consider adding a simple compressor to the front of the chain, as that really improves the evenness of the sound and the playability. It may offer stompbox simplicity of operation but what the EHX engineers have achieved here is quite extraordinary.