Electro-Harmonix's Oceans 11 reverb really impressed me. The new Mod 11 follows a similar mono-in, mono-out format and is, again, presented in a standard compact pedal format. Power comes from the included PSU, and there's the option to plug in a foot switch (normally open, momentary action) for additional real-time controll of things such as tap tempo or rotary effect speed change. One of the four knobs operates a rotary switch to select from one of 11 modulation effect types. The other three are labelled Depth, Rate and Volume/Colour. 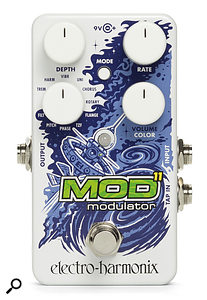 A Mode button, between the knobs, is joined by a multi-colour LED that indicates not only when the pedal is active but also the currently selected mode. Depending on the selected effect, there are one or two additional modes, which deliver either variations on the effect itself, or variations on the way it's controlled. When Mode is pressed and held so that the LED flashes, the Rate and Volume/Colour knobs take on their secondary functions. For Standard mode the LED is green, and for the other two modes it turns orange or red. Once you've adjusted an effect to taste, your additional settings are stored for next time you select that effect.

The Trem effect is, of course, Tremolo, but by exploring the secondary functions you can change the modulation wave shape from sine to triangle or sawtooth. You can also make the effect level-dependent, so that the input signal envelope controls the modulation rate or depth. Harm is Harmonic Tremolo, an effect that was built into some early Fender amplifiers, which splits the signal into high- and low-frequency bands then modulates between the two. Again there's the option to apply envelope control over modulation rate or depth, and there's also the option to change the crossover frequency. Vibr offers pitch vibrato, with similar secondary features to Tremolo.

No comprehensive modulation pedal would be complete without a Univibe emulation, and Uni includes both the Chorus and Vibrato modes of the original, along with a secondary option of adding a little overdrive. Chorus is similar to the EHX Small Clone pedal, with the extra features offering a choice of tri-chorus or bass chorus. Rotary is a full dual-drum recreation of a Leslie-style cabinet, with modulation at different rates for the drum and horn. The horn level can be adjusted and overdrive added. Using the external footswitch, the speed can be changed with the characteristic speed ramp of its mechanical counterpart.

Flange can be set to additive or subtractive flanging (for the latter, the polarity of the wet relative to the dry signal is inverted), there are multiple LFO shapes if you don't want to stick with sine or triangle, and an envelope follower feature is also available. TZF offers the option of 'through-zero flanging', where the wet delay time goes all the way to zero, just like tape flanging. Again, there are additive and subtractive options that change the colour of the flange sound, and a choice of LFO waveforms gives sine or 'barber pole'-style flanging — the latter effect gives the illusion of always sweeping in one direction. Phase has secondary options to switch from a four- to a six- or eight-stage phaser, again with a choice of LFO shapes and the option of an envelope follower.

No comprehensive modulation pedal would be complete without a Univibe emulation, and Uni includes both the Chorus and Vibrato modes of the original, along with a secondary option of adding a little overdrive.

Pitch, based on a modulated pitch shifter, can be subtle or extreme, and produces fabulous detune effects as well as large shifts. But, by invoking the secondary functions, you can adjust the wet/dry blend and bring in stepped pitch or alternative LFO wave-shape modes, which include major and minor arpeggios. Last comes Filt, a modulated filter effect that can be set to resonant Low-Pass, High-Pass or Band-Pass modes, with four choices of LFO shape, an envelope follower option and adjustable Q.

Other niceties include a momentary footswitch mode (for bringing in effects as brief punctuations), and the onboard footswitch can be used as a tap tempo, to set the LFO rate when you don't have an external switch connected.

As with the Oceans 11 reverb, the sound quality is as good as you'd expect from a dedicated Electro-Harmonix pedal. If you ignored the extra functions, you could take the controls at face value, and set up your effects in the usual way; the Mod 11 would still be decent value. But the secondary functions are worthwhile. The phaser sounds better in eight-stage mode, and the envelope-controlled modes are great, especially for the filter. Make a copy of page 14 in the manual, and you'll be able to see all the secondary functions at a glance!