Great River's new PWM 501 compressor is the only dynamics processor on the company's books, but it's very heavily featured. Complementing the MP 500NV preamp and Harrison 32 EQ (the latter was reviewed in SOS June 2011) as a 500‑series rack module, the PWM 501 can be used on its own, or in concert with the other units above to form a powerful modular channel strip. The letters PWM imply that the gain‑control element is based on a pulse‑width modulation scheme that switches the signal on and off very quickly to control the audio energy. The ratio of the on to off periods determines the actual gain reduction. The user controls are not quite as crowded as on the Harrison 32EQ module, but it's still a very busy front panel with some unusual facilities. The inevitable result is that the panel markings require close examination at first, but familiarity makes operation very straightforward.

This is an unusually configurable compressor, not least because some of the controls do slightly different things depending on which part of their ranges is being utilised. All the standard basic controls are present (Threshold, Ratio, Attack, Release and Make‑up gain). These are supplemented by a variable high‑pass filter in the side‑chain and a mix control that blends both feedforward and feedback signals into the side‑chain processing. This makes the PWM 501 a very versatile compressor that can produce an impressively wide range of dynamic effects and characters.

The red output-level control ranges from fully off up to +15dB of make‑up gain, with unity gain marked at the nine o'clock position. The adjacent 16‑LED bar‑graph meter can be switched to indicate input or output levels, or gain reduction. In the I/O modes the junction between the green and yellow LEDs represents a signal level of +4dBu. The first red LED illuminates at +8dBu and the second at +12dBu. When switched to show gain reduction, the bar‑graph descends from the top, each LED indicating an additional 1dB of gain reduction.

Over the left half of the threshold control's range the side‑chain processing operates as a conventional RMS compressor, but threshold settings in the right half force the unit to work more as a peak‑sensing limiter. Although the distinction isn't obvious in practice, it works just as you want it to! The actual dynamic response depends on the ratio control setting too, of course, and there's some interaction between them. The ratio control is scaled up to 20:1, but the slope varies with the attack and release times, as well as the feedforward/feedback side‑chain mix. 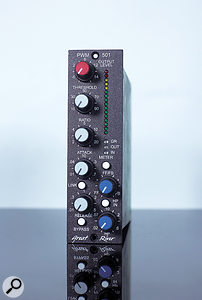 The attack time constant employs a peak detector and has an extremely fast minimum setting, which can be very powerful with transient‑rich sounds, but can also create audible transient distortion in some situations. The release control spans 100ms up to 5s and there's no automatic recovery mode. Again, these controls tend to interact to some degree with the threshold and ratio controls, and fine‑tuning the compressor for a specific effect is something of an iterative process.

A side‑chain link button is provided, allowing the loudest side‑chain signal to control any other units on the same link bus (connected to pin six on the 500‑series card connector). The side‑chain control-signal format is unique to Great River and it's not possible to link the PWM 501 with units from other manufacturers. A relay bypass is also provided, controlled from another push‑button.

Yet another push‑button introduces a second‑order (12dB/octave) high‑pass filter into the side‑chain, and an associated rotary control adjusts the turnover frequency from 20 to 600 Hz, which helps to minimise the dominance of bass signals in determining the dynamic processing.

The final rotary control determines the side‑chain signal source. The counter‑clockwise setting provides a feedforward signal taken from the compressor's input, while the clockwise end takes a feedback signal from the output. Midway positions blend varying amounts of both. The feedback topology is the most prevalent in compressors, and tends to deliver a relatively smooth, rounded and gentle response to changing programme dynamics because the feedback nature is inherently self‑damping. In contrast, most limiters use the feedforward arrangement which tends to be more aggressive and faster‑acting, but potentially with less precise control. Several manufacturers offer switchable feedforward/feedback options, but few include this useful blend function, which affords a huge range of dynamics‑processing character options and effects.

Operating the PWM 501 is logical enough, although the controls can be quite sensitive and small movements can have dramatic effects, particularly with the threshold and ratio controls, which interact with each other quite intensely. The ratio control's markings must be considered a guide, with settings optimised by ear — but that's always a good plan, anyway! The range of different dynamics effects available is unusually broad, with everything on offer from smooth subtlety for vocals and acoustic instrument processing (using the feedback end of the blend control), through to aggressive and snappy drum‑shaping (with the feedforward end) — but the ability to mix both creates more possibilities for fine‑tuning.

This is a very powerful and impressive-sounding compressor that makes for a really versatile all‑rounder. I'll be reluctant to take this out of my Lunchbox and send it back! Hugh Robjohns