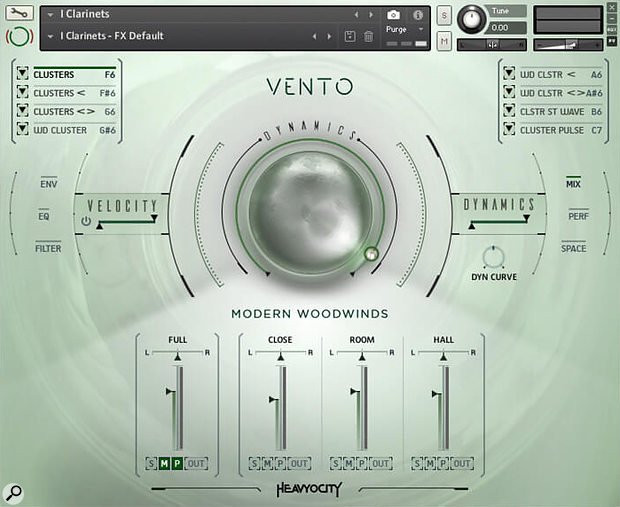 Heavyocity's Vento Modern Woodwinds is the most recent follow-up to their FORZO Modern Brass and NOVO Modern Strings library. The key to the product is what is meant by 'Modern'. Heavyocity have combined traditional woodwind scoring with extensive sound-design capabilities, allowing you to go from 'standard' to 'sci-fi' within a few clicks. Patches are organised into Traditional and Evolved folders, with each instrument giving access to a large menu of presets once loaded.

Starting in the Traditional folder, we see five section instruments: Clarinets, Flutes, High Ensemble, Low Ensemble and (my favourite) the rumbling Contra Bass Ensemble. While the long sustains here play well, the real power lies in the many textures, patterns and special techniques assignable to keyswitches. In the High Ensemble, for instance, we morph between a very functional staccato and a lush ppp sustain. After this there are several swells and trill presets which sound great, followed by the highly evocative Extended presets, wherein patches like Staccato Waves and Subtle Pulses provide moody and effective textures which grow even more impressive when stacked with additional instances of extended techniques. Whether one is dealing with aleatoric music or just trying to sweeten a background pad, these were among the highlights of the package for me.

At the bottom of the interface is a performance controller which can assign patterns to dynamics and gate effects. Here a standard long sustain can suddenly become a pulsating atmosphere or a vicious swarm when its attack is passed through a comb filter or dynamic triangle (cresc/dim pattern), or the always useful random pattern.

For composers and sound designers looking for a comprehensive and otherworldly wind-based instrument — and a massive sonic expansion to their scoring palette — Vento Modern Woodwinds is an intriguing and powerful choice.

The real innovation and, consequently, value of this package comes in the 'Evolved' family of instruments, where constant motion is the name of the game. Users can select the Woodwind Designer, or Woodwind Loop Designer. The first is for creating sustained woodwind evolutions, while the second offers a large selection of woodwind patterns in the key of C which can be combined into highly evocative orchestrations in just a few note-presses. These patches present the entire woodwind section (with their individual ranges colour-coded for convenience) with a constantly moving filter that can be assigned to envelope, EQ, filter, drive, gate and space parameters, each of which can be independently modified and linked to other filters. It is an interface simple enough to quickly learn but powerful enough for nearly endless sonic variations.

The price tag on this ensemble may be a bit much for those looking for just pads and accents for their scores. Nor is this the library to purchase if you can only afford a single good woodwind section. But for composers and sound designers looking for a comprehensive and otherworldly wind-based instrument — and a massive sonic expansion to their scoring palette — Vento Modern Woodwinds is an intriguing and powerful choice.