Anyone who bought a hardware synth in the '80s already knows that even a few megabytes of sample memory can nevertheless result in incredible sounds in the hands of skilled sound designers. So, while some sample libraries now take up tens of gigabytes, and hard disk space is cheap, there are still old‑school samplists who can create wonders with far less raw material — people like Hollow Sun (Steve Howell), who worked closely with Akai samplers for years and has created this collection of 128 evolving pads. 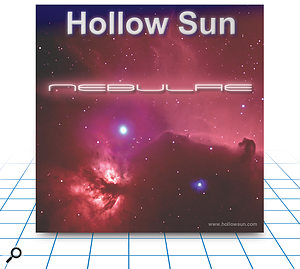 The Nebulae library takes up a modest 525MB of space, with individual pads ranging from just 263KB to 15MB, and typically employing four or five samples. However, despite their small size, there are none of the audible jumps from one sample to the next that you often notice with lesser libraries. Instead, each and every one plays as smooth as silk right across an 88‑key MIDI controller, offering rich textures, swirling layers, and bags of subtle, evolving details across many seconds of playback, as well as a very playable velocity response. In the Kontakt version I tested, native effects such as reverb, delay, phaser and flanger have been added to round the presets out and add more depth, yet the pads remain low in their CPU demands.

The sounds themselves are ideal for genres such as ambient electronica and film scores. We're talking classic 'space music', with echos of Vangelis, Tomita, Jean‑Michel Jarre and the like, with moods ranging from smooth and mellow to delicate and ethereal; lush rather than aggressive, but with some fruity filters and powerful bottom end where required.

With preset names such as 'Eclipse' and 'City Of Tomorrow', you'll probably already know whether or not they float your boat. I happily paddled away for hours exploring Nebulae's warm analogue, spiky FM, and wispy digital textures, its rich filter sweeps, tinkling bells, choirs, organs, strings, breathy pipes, classic combinations such as electric piano and strings, and more abstract sci‑fi landscapes.

Nebulae should appeal to hardware synth enthusiasts who haven't been impressed thus far with soft-synth sounds. Judging by the sample names, Steve originated many of his patch creations on Yamaha's much‑praised FS1R eight‑operator FM synth, with its unique Formant Shaping Synthesis (which has been used to good effect in Nebulae's vocal pads).

Nebulae concentrates on doing one thing really well, so if you want a quality pad sound you'll find yourself returning to this tiny but perfectly formed collection again and again, simply because it's so quick and easy to find something that's inspirational. At just $50, this is the cheapest way I know of adding the sound of a clutch of hardware synths to your computer‑based setup. Pure class! Martin Walker