I recently purchased (and reviewed for SOS) the TuneBot, a revolutionary new electronic tuner for drums. I absolutely love this product and find it incredibly useful for achieving consistent tuning across my drum kit, something that's often considered a black art amongst drummers. In fact, the only fault I could really find was the price. At £99$99, it certainly isn't a cheap solution. 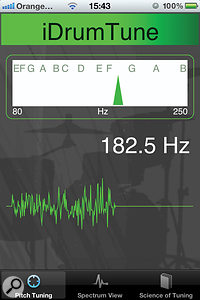 iDrumTune's standard pitch tuning page.Now, hot on its heels (and costing only 69p$0.99 at the time of writing), comes the iDrumTune, an App for iPhone, iPod Touch or iPad that's designed to analyse the frequency of any drum and display it on screen.

Having been so impressed by the TuneBot, I wasn't expecting a great deal from an app costing a fraction of the price, but I couldn't have been more wrong! This is a fantastic app that works brilliantly. The interface is clear, simple and easy to use: just hold your iPhone a few inches from the centre of the drum and strike the head. Within a second or two, the frequency information appears in graphical form, with the strongest frequency displayed in Hertz and as a musical note. This is perfect for finding the fundamental pitch of the drum and keeping all your drum tunings in key relative to each other, or tuning them to the key of a particular song. If you want a little more detail, a Spectrum View is provided that breaks down the frequency display further. This view enables you to clearly see the fundamental frequency spike, plus any other frequencies that are dominant in the drum, which is a useful aid in both tuning the drum and tracking down problematic overtones in a studio environment.

This is a fantastic app that works brilliantly. The interface is clear, simple and easy to use...

Using my TuneBot as the 'control', to check my readings, I found that the iDrumTune performed flawlessly, giving almost identical frequency readings to its dedicated counterpart. I was even able to move round the drum tapping the head near each lug to get an idea of which needed tuning up or down to achieve an even tension across the head.

In addition to its tuning functions, the app includes a very well-written guide to using iDrumTune that also outlines the general principles of tuning drums. The web site and Facebook pages dedicated to the iDrum also offer lots of useful information, and it would appear that the app will be updated regularly (the spectrum analysis is a recent addition), with new features making it even more powerful.

I absolutely can't fault this app. It works exactly as described and performs consistently, which puts it very much in the 'serious and usable' app category. You still need to use your ears and a drum key, but it's unbelievable value at only 69p$0.99, and would prove to be an invaluable aid not only for drummers but also studio engineers and producers presented with an out-of-tune drum-kit in a session. iDrumTune: like a guitar tuner, but for drums!