Matt Stedeford and his team at Imperfect Samples have created their own niche in the overcrowded and highly competitive piano sample library marketplace, by shifting the emphasis from pristine and polished products to character‑based libraries. Their Braunschweig Upright Piano, which I reviewed in April 2009 (/sos/apr09/articles/braunschweig.htm), is my go‑to option when an off‑the‑beaten‑path piano is called for, so I was interested to see what else Imperfect Samples could come up with. 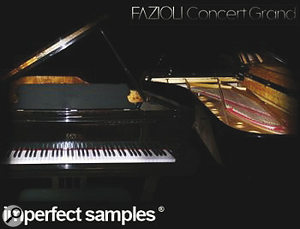 Their latest offering is the Fazioli Concert Grand. The Fazioli is a highly sought‑after 10‑foot grand that is universally regarded as an elite instrument, so Imperfect Samples' choice of subject appears to be a wise one, with considerable stature and reputation. In addition, the Fazioli is not a standard offering in other piano libraries.

The Fazioli library is sold from Imperfect Samples' web site and is available for use in Kontakt 4+ (full version, not player), Logic's EXS24 and Impefect's own player, which works as an Audio Unit and VST plug‑in.

Imperfect Samples' modus operandi for their libraries is to offer each instrument in several packages, with varying prices, microphone perspectives, sample layers and additional materials. The chart on their web site makes it clear what you get in each. This method gives purchasers a handy way to test the waters without shelling out for the entire library.

Another of Imperfect's trademarks is the aforementioned multiple mic‑perspective approach. Users are able to load the instrument recorded at different mic placements (such as inside the lid, two inches from the soundboard, close to the hammers, two metres away, and so on). The amount of variance between the perspectives is quite drastic. In the Kontakt version, users can load one instrument with several perspectives included, and the benefit of being able to mix the mics on the fly.

While most sample libraries avoid real‑world sonic blemishes such as seat noise, finger taps, pedal noise and so on, Imperfect Samples welcomes them with open arms, to ensure a hyper‑real experience. I have mixed feelings about such quirks, but I understand their inclusion in this library. Imperfect Samples really embrace the imperfect as part of the company's identity. Matt Stedeford must have recognised the dilemma of having access to such a legendary instrument as the Fazioli but being confined to sampling it imperfectly. That's probably why the Extreme package contains five microphone perspectives and — wait for it — 127 velocity layers!

As for sound, this instrument is fantastic. I tested the Complete version (up to 14 layers from three perspectives) and was amazed by its warmth and character. The low end is especially rich and the high end is quite warm. To my ears, the Fazioli really shines on quiet, indie‑film‑type pieces where the vibe of the piano is showcased.

All in all, this is a highly evocative instrument that will find a home in my production template. David Ricard